My parents are coming! GAH!

My parents, together as a unit, haven’t visited California in nearly ten years. My mom started the countdown when there were still some 57 days left. 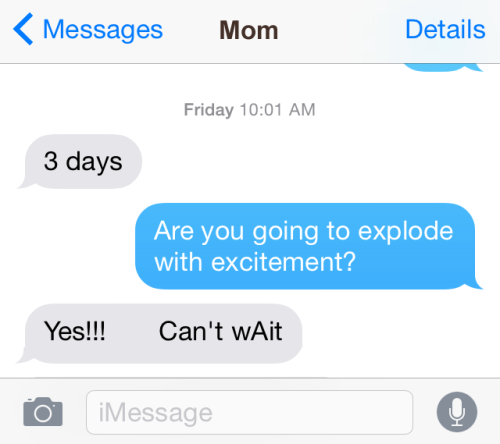 They’re actually starting their long journey most of the way across the country today and they’ll be descending on FOG HQ on the evening of the 23rd. That’s like tomorrow! For once, I’m actually glad that I work for a Scrooge-like company and get hardly any time off since it means I get respite at work while my sister does the bulk of the entertaining. Yay cheap-ass company with no holiday spirit!

I spent all weekend cleaning every crevice of my house. Not that it was necessary really; it’s just that that’s how I was raised. My mom would do the same if she had house guests coming. We always do a really thorough cleaning before guests arrive even if it is just family.

There are two trees downstairs; the main attraction and the only real tree in the house, and a tiny one in the solarium kitchen window that faces out on the street. Upstairs, there are also two Christmas trees, but they’re both small. Every room in my house is decorated for Christmas. Fortunately, my sister is also a huge fan of Christmas and actually had enough crap to decorate four Christmas trees and a Ficus. My family is a little weird.

So, we’re all ready for the descent into madness.

I have mixed feelings about this visit since I still don’t get along with my family terribly well. First and foremost, there’s the fact that they betrayed me by not believing that I was being sexually abused in our own home and letting it continue. Because of that, I didn’t talk to them for many years. They abandoned me to deal with child sexual abuse all on my own. If they had gotten me some help when I was a kid, I wouldn’t have wasted so many years being self-destructive.

So, there’s that. That’s a big “first,” but there’s also a second. Second, we don’t have much at all in common. My mom is an elected official. A Republican elected official. They go to church every Sunday. My mom actually worked at a church for many years. Most of their friends are church friends. They live in a very Christian, very conservative Republican part of northern Michigan.

I am a liberal atheist artist with tattoos who works for an adult industry company. My family and I are completely ideological opposites. The only time we talk politics is in a general way since, as county clerk, my mom is responsible for running elections. We avoid talking religion altogether.

I don’t know any churches in my area. I drive by churches all the time, but I don’t see them. My brain identifies them as churches and puts them in the “useless information not necessary to remember” category along with day care centers, plastic surgeons and prostate doctors.

Fortunately, I don’t think they have any expectation of going to church. Still, Christmas is a religious holiday, so I’m sure we’ll do something god-like to mark the occasion, perhaps saying grace at dinner or something.

I play along. And we don’t talk about it. As long as we don’t talk politics or religion, it’s all good. The last thing I want to do is argue with my mother over beliefs. If I’m going to argue with her, I’d rather it be about something important like their denial of child abuse and failure to get me any help.

This will probably be my dad’s last visit. He’s getting on in years (he was in his 40s when I was born) and we just found out a few days ago that he has an incurable, degenerative illness I’ve forgotten the name of that will probably, eventually kill him. So, at best, I only have a few more years with my dad.

When I think of my dad, I always picture him as he was when I was a kid. It’s always sobering seeing the reality of a shriveled old man who can’t get out of a chair on his own.

So, yeah, mixed feelings of anger, resentment, nostalgia, and ultimately, love, because even after all they did (or didn’t do) when I was a child, they are still my parents and life is always a little bittersweet.