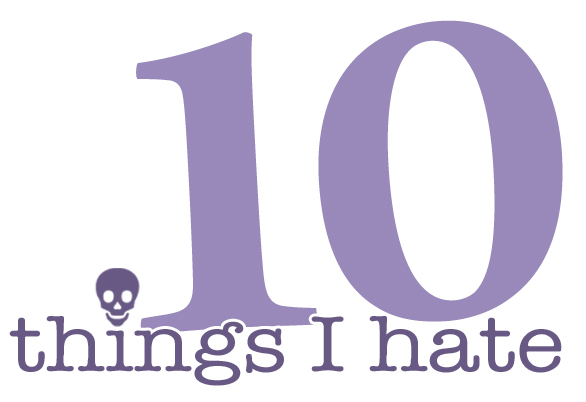 1. I can’t believe I made it to Part 3 before I brought this up, but I hate the way people drive. Some specific things that drive me crazy are as follows:

1a. You are never the only car on the road. The roads are not your personal property. Pay at least a little attention to the fact that there might be others around you because those people think they own the roads, too. This also applies to pedestrians.

1b. Signal before you turn. It does no good to put your turn indicator on when you’ve already slowed down or stopped.

1c. The traffic that is already on the freeway has the right of way, not the traffic that’s merging. The law of first come, first served applies to driving, too.

1d. Don’t block an intersection because you’re trying to squeeze into the two feet of space on the other side before the light changes. You don’t fit and you’re blocking traffic. Just sit at the light and wait your turn like everyone else.

1e. Do not drive on the shoulder ever unless you have a car problem or you’re being pulled over by the cops. People who drive on shoulders to get five cars lengths ahead are assholes. I won’t let you in if I can possibly help it.

1f. Just because your car has mirrors, it does not mean you should use them to put on mascara.

2. I hate textspeak. People have started to write with ‘super-cute’ textspeak like “c u ltr” no matter where they’re writing. In a text message, fine, but when you have a full keyboard in front of you, there’s no reason for that. Type the goddamn letters and punctuation already. This is not communist Russia; you’re allowed more than one vowel or comma per sentence. Or even worse, people who actually talk like that IRL. Like, OMG!

3. I hate reality television. Some people know every stupid reality show since the Real World. There are people who could tell you every winner of American Idol, but couldn’t name even one Supreme Court Justice. If you want a reality show, go outside. There’s tons of reality all around you. Camp outside a liquor store before it closes on a Friday night and you’ll see a reality show starring drunken frat boys and homeless drunks. If you give the drunks a dollar, I bet they’d even do a dance for you.

4. I appreciate the generous notion that you may think I don’t have my own music, so you’re willing to share yours with me. It’s very nice of you to want to share, but I do actually have my own sound systems in my house and in my car. You can stop sharing now. When I can hear, feel and actually see your music from blocks away like an earthquake, that shit is too goddamn loud. If I want to hear the latest crappy, rehashed, Top 40 nonsense, I can play it myself. Turn that shit down, please.

5. It seems to me that a lot of people are either incapable of thinking for themselves or they just don’t want to. Just buy/watch/wear/listen to whatever product everyone else is buying/watching/wearing/listening to, do a little research so you don’t sound like a total idiot when you talk about it and you never have to think again! Trends exist so that companies who don’t care what you think can make lots and lots of money, and so that people don’t have to think about anything ever. If I see one more douchebag with a corporate logo written across their ass, I’m going to lose it. It is unnecessary and it does, in fact, make your ass look fat, which brings me to number 6…

6. I hate people who wear corporate branding as a fashion accessory. Why would you purposely give a corporation free advertising?  Corporations, every single last one of them, are out to make more money. That’s the whole point. If they weren’t interested in making lots of money, they’d be non-profit. When you pay for one of their products and then give them free advertising to boot, who do you think is losing in the bargain? You paid money to be a corporate stooge. You actually paid money to turn yourself into a billboard so that other douchebags can go out and buy more douchebag apparel to freely advertise to other douchebags. It’s a vicious circle of douchebaggery. Stop paying money to give these corporations free advertising. They should be paying you.

7. I hate those little club cards that some stores hand out to trick you into thinking that you’re saving loads of money by using them. You’re not saving anything. All you’re doing when you swipe that little card is paying the price that things should be and giving the store valuable marketing information about you. The people who don’t use the cards are the ones who lose because they’re paying the extra markup. So, your choice is to either give them free marketing data or get ass-raped on the price of fresh peas. Either way, we, the consumers, lose. If I do fill out your little form for your stupid card so that I can save three dollars off of your ridiculous markup on bananas, my address will be 123 Evil Corporation Way, Gofuckyourselfville, The United Greed of Murrica. Which brings me to number 8…

8. When I buy something from your crappy, overpriced store, do not ask me for my phone number, area code or zip code, and expect me to give it to you. Fuck you. It’s bad enough that I’m giving you my money for your overpriced junk, but I’m not giving you my zip code. If you insist, I will tell you that my zip code is GETBE-NT. And, in response to the confused look on your sale associate’s face, I will say that they used up all the numbers, so zip codes are made of letters nowadays. Didn’t you get the memo?

9. I hate women’s bathrooms. They all suck. I’m sure that men’s bathrooms aren’t all that either, but since I’m female, I wouldn’t rightly know. There seems to be some sort of  complicated mathematical algorithm innate to females that I missed out on somewhere. This dirty math allows women, except for me and a few others, to know from inside the stall, just how big a line has formed on the outside. The algorithm naturally computes the number of people waiting in line into a precise duration to stay in the stall. The longer the line, the more time they take. It’s a fascinating process to watch really. Well, it might be, if I ever got to observe it without having to urinate really badly. A full bladder tends to blind me to scientific study somewhat. And, inevitably, when I finally make it into the prized stall, there is pee all over the seat, or worse.

10. I hate suburbia… all of it… everywhere. The suburbs are supposed to be cleaner, safer, better. I call bullshit. If by better you mean devoid of any sort of culture whatsoever, universally painted in shades of beige, teeming with chain restaurants and chain stores, and full of asswipes whose idea of the high life is having their windows smashed because they ridiculously live on golf course, then, maybe.  Personally, I’ll take the grime and noise of the city over your fake cul-de-sacs, your keeping up with the Jones-ism, and your homogenized uniformity any day.  Just driving through the suburbs makes my skin crawl. I don’t know how people live there.