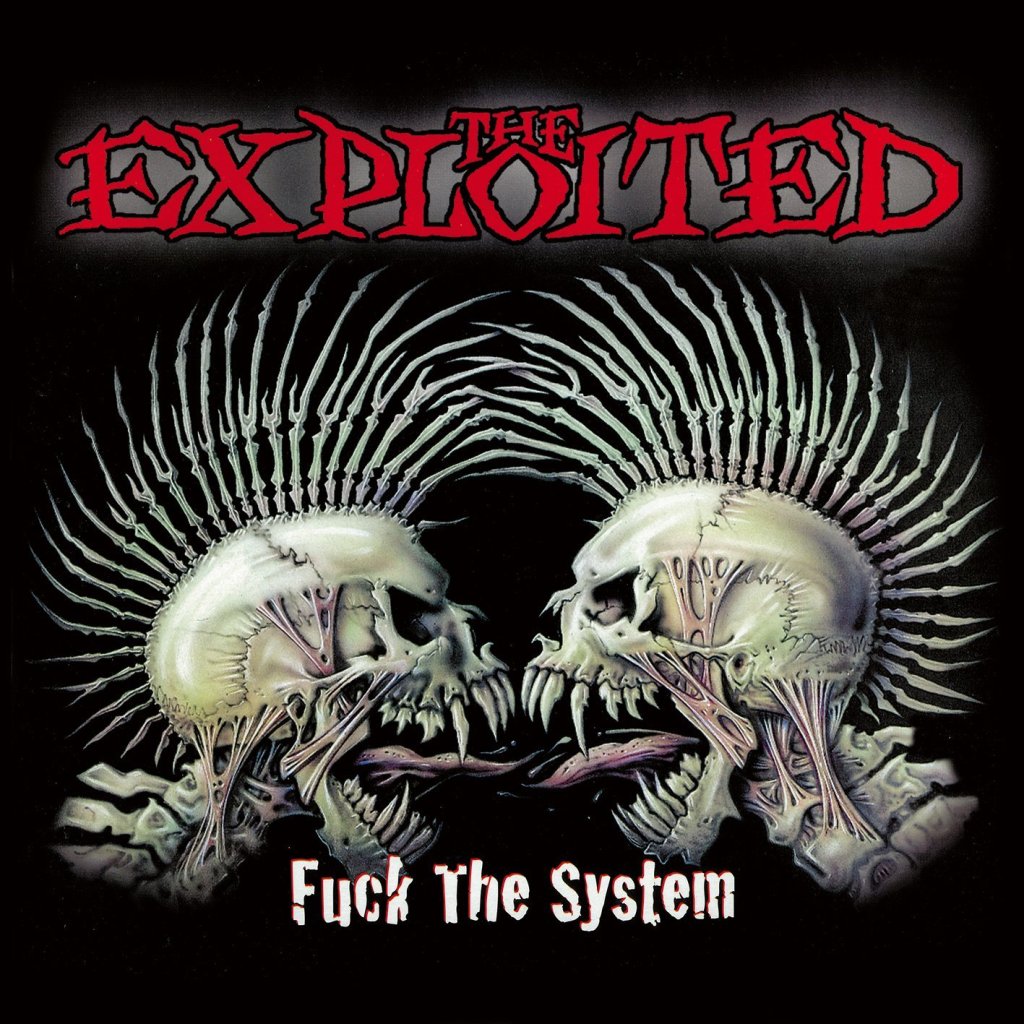 Album 27: Fuck The System by The Exploited.

Way back near album #6 in this series, when I was just a wee lass, I discovered the most hardcore punk band I’d ever heard up to that point called The Exploited. I had all their albums on vinyl. Unlike most girls in my age group who were busy with lip gloss and squealing, I totally fangirled on this band.

In 2003, The Exploited released their 8th studio album. I didn’t expect much, since they’d been around for almost 25 years at that point (I had only been a fan for around 20 of them–newb) and really, can you still be hardcore after 25 years, but I bought it and was pleasantly surprised to discover that it sounded just like The Exploited.

They were doing a tour in support of the album. Strangely, and for no good reason that I could see, The Exploited had one show in Los Angeles at a large music venue, and the next night or a few nights later, they were playing at the very same tiny Malibu restaurant where I saw Fu Manchu play.

While it sort of, in a weird way, made sense for a relatively laid back California surfer stoner band to play in a restaurant in Malibu, Exploited is a different animal altogether. They are bloody loud hardcore punk from Scotland, which isn’t really conducive to restaurants or Malibu, and especially not restaurants in Malibu. For example, this album starts with literally 42 seconds of screaming. I had to see how this would play out.

It was absolutely insane. There was a mosh pit in the middle of a restaurant. Fortunately, they had the foresight to move all the tables and chairs out. I’ve never seen such an incongruous show. Mohawks, combat boots, spikes, and The Exploited playing inside a family restaurant. At that point, I had my own glorious pink mohawk. I miss it sometimes until I remember that it was so long I couldn’t even drive. It looked like this:

After the show was over, we were hanging out in the parking lot talking to the band. I told Wattie that The Exploited was my first hardcore band way back in the 80s. I told him about how we met once before at an all ages show in Detroit when I was a teenager and how I painted their skull logo on the back of my first black leather motorcycle jacket (which was eventually stolen by some asshole like all the others I’ve had).

Wattie is from Edinburgh. As a stupid American, even though he was speaking the same language I supposedly speak fluently, I have always had a really hard time understanding his accent. I can understand almost everything he sings, just not what he says. Here’s an interview with decent sound where I can still only make out every other word. Van, snow, tip it over, American flag, skinheads, fight. For the record, The Exploited is not a fascist, racist skinhead band and never have been.

The accent coupled with my inability to hear anything when there is background noise meant that I have not one little clue what he said. We talked for at least five minutes about I have absolutely no idea what. I’m quite sure it was inspirational though.

Me: awkwardly smiles and nods head in a way that could mean either yes, no, or I have palsy. Naturally, I just gave him a hug.

A few months later, my parents came to visit and we had lunch at the very same restaurant. It was surreal seeing it in restaurant form without Fu Manchu or The Exploited, but the food was actually quite good. I never heard of a live show there after The Exploited. I think they learned their lesson.

There’s more to the story of that weekend, which I’ve already written in the post called Roofies, Mohawks, Shotguns & Blood: A Love Story, which has to be one of my favorite post titles ever.