1. The Pope. That is to say, I don’t hate the Pope. He’s never done anything to me personally, he seems like an alright chap for a Priest, and if he wanted to, I’d invite him over for a cup of coffee. Why not? What I hate about the Pope is that, all week, I’ve heard nothing but news on the Pope. This morning, I even heard a “news” story about him driving around D.C. in a little black Fiat. I don’t care what the Pope drives. I really don’t. What I care about is that I have no idea what’s going on in the world, because all I’ve heard on the news this week is the Pope.
2. The Pope speaking before Congress. I seem to vaguely recall that America has a little thing called the Establishment Clause, which creates a wall between church and state. This clause not only forbids the government from establishing an official religion, but also prohibits government actions that unduly favor one religion over another. Granted, the clause has to do with lawmaking, not having the Pope over for a chit-chat, still, allowing the head of a church to speak for seeming hours on end (he was talking when I woke up and he was still talking when I got to work) in front of the legislative body of American government is too dangerously close to trampling the first amendment of the US Constitution for my liking, even if he is technically also a head of state. This morning, when I heard the stupid Fiat story, I actually said aloud, “Fuck you, Francis. Go home already.” Telling the Pope off from my kitchen when he’s not in my kitchen is not normal behavior for an adult human. Or perhaps it is. What do I know.
3. Yet another freakin’ heat wave. It was 105° (40.5556° C) yesterday. It will be 105 today. It has always been 105. We’re at war with Oceania. We’ve always been at war with Oceania. Seriously, fuck you, heat. Go home already.
4. Depression. It has been bad lately. Like, really bad. If you don’t believe me, read my blog posts for the past few weeks. I’m trying to work through it, but like the heat and the Pope, it just doesn’t seem to be going away. On top of that, I’ve been insanely busy and haven’t had any time to catch up with y’all, making me feel even more isolated. What’s going on in your worlds?
5. PCs. I’m getting one at work. When my company was sold, the guy who sold it gifted me the Mac I work on. It is my personal property. Since I already had a computer at home and it had all my work stuff on it, I moved it to my new beige cubicle and have been working on it for the past year. Well, someone in IT finally freaked out that they can’t Big Brother my personal property, even though I gave them access a year ago, so now, they’re buying me a new PC. I haven’t used a PC in over 15 years. I work on a Mac, because I am a graphic designer, Macs are still the industry standard for my profession and all the other designers at my company work on Mac. All of them. I have no idea how this will impact my productivity, but I can tell you (and have told my boss) that it will. Also, they will now be able to monitor my internet usage, which means much less time here. Sadface.
6. Lack of creativity. One thing I hate about depression is that it keeps me from being able to write or draw or do anything creative. I’ve had to expend what little creative energy I have just doing my job, which is normally a cake walk. I can’t make the words flow. I wrote one post this week that was mainly whiny and just over 300 words, and even getting that many out was a struggle.
7. This idiotic bit of slacktivism called the Black Dot Campaign:

The idea behind the Black Dot campaign is this: victims of domestic violence can draw a black dot on their hand as a silent signal. Once it becomes widely enough understood, people who see the dot on their friends’ hands can approach them and have a conversation about abuse.

The original idea to give victims of domestic violence a silent way to call for help wasn’t an entirely terrible one (except abusers can see black dots and know what they mean, too) but as things do, when it went viral, it got dumb and distorted.

People who are not in abusive relationships used it as an excuse to attention-whore by posting a black dot selfie in faux aid of the cause. It got so ridiculous that they had to go and change the cause:

instead of drawing black dots in solidarity, the campaign is now encouraging supporters who aren’t at immediate risk of abuse to write “Say no to domestic violence” on their hands to avoid confusion.

And the whole thing reminds me of this:

8. Donald Trump. Seriously? Nearly half of the slack-jawed mopes who even care who is the next President of the United States would vote for this bigoted, xenophobic thing with the sentient hair? 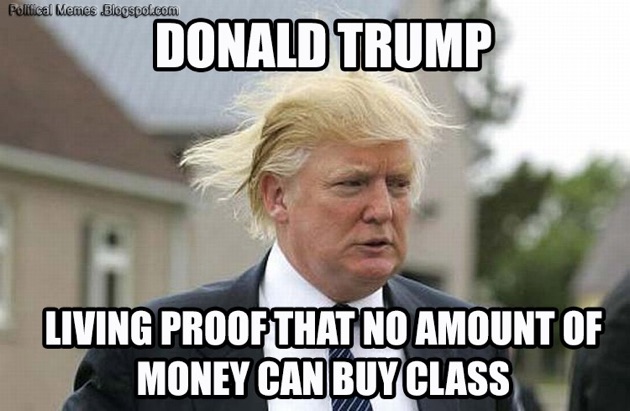 He’s the Sarah Palin of this election cycle and I wish he would disappear like she did.
9. I have no sense of humor. I don’t know where it went, but I would like it back. I miss it very much since it is usually very helpful in dealing with nonsense like 1-8.
10. Male is still dead, which would be a good thing if there was a zombie apocalypse, but since we don’t have one of those even though I’m prepared, it very much sucks. That is all.