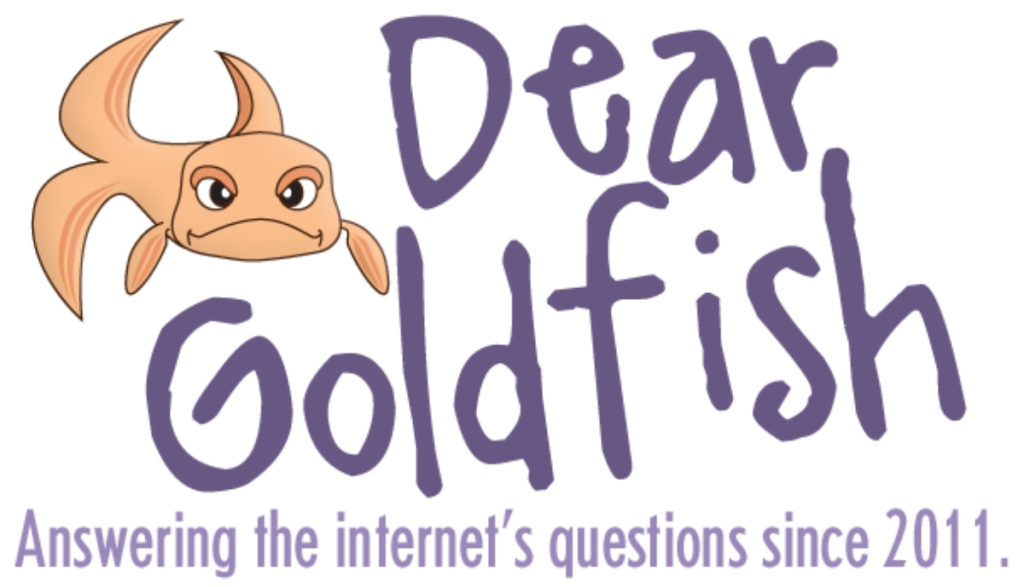 Hello, Internet. Welcome back to Dear Goldfish, the (more monthly than) weekly series where I answer real questions asked by our studio audience, in other words, you. The following questions have been submitted by people who typed words into search engines with no editing or censoring.

I’m very glad Xmas is over, so I can retire as reigning expert on the baby J. Although, Easter is right around the corner…

That’s not how you spell ass, ass.

Dear Goldfish,
do you think full chest tattoos on women are trampy?

It depends on the tattoo I suppose. Having TRAMPY tattooed across your chest, for example, would be rather trampy.

Why on earth would you tattoo a fish? And stop asking me tattoo questions, please. Thanks.

Based on the sheer number of vowels, I believe that’s the language of my peeps: Finnish. I have no idea what it means though. To the translator, Batman.

“Pros and cons of the dog.”

You’re in luck as I’ve already written that down.

Um, I don’t have a wife. I’ve never been married. And if I were, I’d most likely have a husband, not a wife. And if I did have a wife, I’d try to avoid marrying the drug addicted whore variety.

Ooh, a language question. Homophones are words with the same pronunciation, but different spelling, e.g. reign, rain, rein. Realized isn’t a homophone since there’s no other word that sounds like it. If you hear someone say “realized,” what they really mean is “realized.”

Dear Goldfish,
are you sure it’s safe?

Why, no, I’m not actually. Life is a pretty unsafe endeavor when you come down to it since it invariably ends in death. Cheers!

I don’t hate the universe. I think the universe is a marvelous place full of potential and unlimited mystery. I am fascinated by it. I mean, just look at how cool this shit is and this is just one tiny part, our part, of the universe:

Dear Goldfish,
the word for the unexplainable want to jump of a cliff when standing on one?

Well, it’s not a word so much as a French phrase: L’appel du vide. Translated, it literally means the call of the void.

Dear Goldfish,
what does the sound of your laugh mean?

Well, generally, if you hear the sound of my laugh, it means that I found something funny. I believe it’s the same across the human species, but I can’t speak for others.

A truism is a statement so obviously true that it isn’t worth mentioning. Let’s see, one with a fish… Oh, I know… House guests are like fish; they both stink after three days.

I think you got your vowels mixed up there. My grandmother was cremated anyway.

Well, that’s just about all we have time for today. Remember, you can submit your own question to Dear Goldfish. Thanks for joining us and be sure to come back for more Dear Goldfish next week! Thank you and good night!