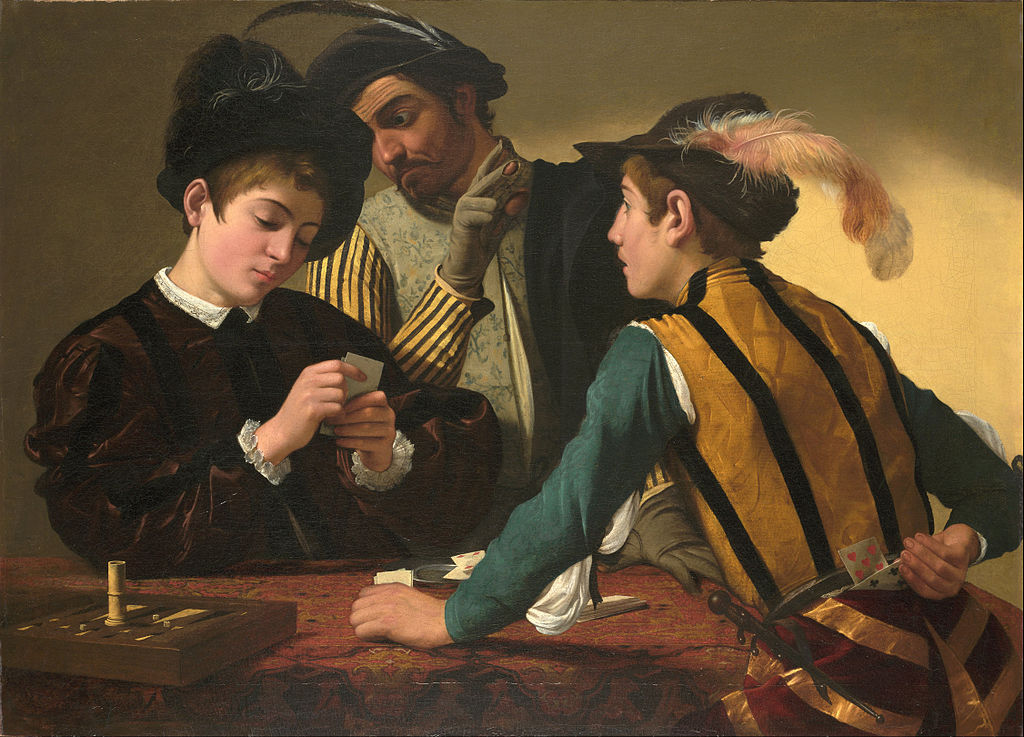 The Cardsharps by Caravaggio, c. 1594 (wikipedia.org)

I’m fascinated by language. Do you have any idea what you’re actually saying when you use idioms? Well, neither does anyone else. Sometimes, I catch myself using these weird but common phrases, and I wonder what the hell I’m on or on about. What does that even mean? A long time ago, I gave you a list of 20 weird idioms and why we say them. Here are twenty more.

An arm and a leg

Example: Raising a baby tiger would cost an arm and a leg.

Origin: No one knows exactly, but it’s likely that the expression derived from two earlier phrases: ‘I would give my right arm for…’ and ‘Even if it takes a leg’, which were both coined in the 19th century.

Armed to the teeth

Definition: Possessing an abundance, or overabundance of weaponry.

Example: Russia and the US were armed to the teeth during the cold war.

Origin: Pirates! This is a pirate phrase originating in Jamaica in the 1600s. Because they only had single shot black powder firearms that took a while to reload, pirates would carry many weapons at once, sometimes holding a knife between their teeth.

Origin: In the 18th century, the phrase meant something exceedingly tiny, but then, as phrases do, it changed its meaning in early 20th century American to just a nonsense expression like others of the era: the snake’s hips, the kipper’s knickers, the cat’s pajamas or the monkey’s eyebrows.

Example: Break a leg in your performance tonight.

Origin: Sprites! Actually, there are many possible origins for this one, but I prefer this explanation: People used to believe in mischievous spirits or ghosts called sprites who enjoyed wreaking havoc and causing trouble. The sprites were reputed to make the opposite of your wishes happen, so telling someone to “break a leg” was the first use of reverse psychology.

Definition: Someone adept at cards; someone who uses skill or deception to win at cards.

Example: Don’t play poker with Harry since he’s a cardsharp.

Origin: Cardsharp and cardshark mean essentially the same thing, but they come from two earlier words: ‘sharping’ (swindling or cheating – circa 1692) and ‘sharking’ (cheating, stealing or sponging – circa 1608), though they were in use before that as this painting from 1595 shows, though it’s not likely that Caravaggio would have titled his paintings in English, so who knows:

Definition: To quit something abruptly and completely.

Origin: Turkeys! The expression comes from the goose bumps and sickly pallor someone going through withdrawal experiences, which makes you somewhat resemble a plucked, cold turkey.

Example: Our marriage went down the crapper.

Contrary to popular belief, Thomas Crapper did not invent the flush toilet, but he did increase the popularity of it and he also invented some important toilet related things.

Definition: To be confronted with the unpleasant consequences of one’s actions.

Example: I’ll have to face the music tomorrow for all this drinking tonight.

Origin: British military. When someone was court marshaled, there would be a military drum squad playing. The term “drummed out of the military” also came from this practice.

Jump on the bandwagon

Definition: To join others in doing or supporting something fashionable or likely to be successful.

Example: He says he’s into Taylor Swift, but he’s just jumping on the bandwagon.

Origin: Old-timey political campaigns used to try to gain supporters with a small parade. The popular ones had bands. Jumping on the bandwagon was essentially providing support for the popular candidate.

Definition: Superstitious practice of knocking on wood after something is said so that it does or doesn’t come true.

Example: Knock on wood that I get the job.

Origin: Jesus! Although the origin is uncertain, one idea is that it originated in the middle ages when pieces of the Holy Rood or Cross on which Jesus was crucified were circulated. To touch one of these was supposed to bring good luck hence touch wood for good luck.

Long in the tooth

Example: You’re getting a bit long in the tooth for short pants.

Origin: Horses’ gums recede as they age, so the older the horse, the more of their teeth you can see.

Once in a blue moon

Example: The Detroit Lions win once in a blue moon.

Origin: The Farmer’s Almanac. Two full moons in the same month are extremely rare, but they do happen. The second full moon in a month was called a blue moon, because the Farmer’s Almanac used to list the date of the first moon in red text, and the second moon in blue.

Definition: The smallest currency symbolically used to convey emphatically nothing.

Example: I wouldn’t pay even one red cent for a Taylor Swift song.

Origin: Racism! The red part refers not only to the color of copper pennies, but also to the Indian Head cent minted from 1859 to 1909.

Starting in the 17th century, Native American Indians were called redskins. Originally, the term was not pejorative since it referred not to skin color, but to the Algonquian peoples use of vermilion face and body paint. However, between the 17th and 19th centuries, it went from being a neutral descriptive term to racist (and it still is re: Washington Redskins).

Example: Telling him to stop spending money on My Little Pony is the pot calling the kettle black.

Example: Her name rings a bell, but I can’t place it.

Origin: Back before the internet, towns used to ring bells to mark the hour or to mark the start of school, church or any other important event. Someone would literally ring a bell as a reminder.

Room to swing a cat

Definition: If there’s no room to swing a cat, it’s a confined space.

Example: There’s no room to swing a cat in this house.

Origin: Pirates! Alright, not exclusively pirates, but sailors at any rate. Animal lovers will be happy to know that this phrase has nothing at all to do with swinging kitty cats helicopter style. It’s actually about whips or cat o’ nine tails as they were called. This type of whip, with 9 long strands of leather, was used to discipline sailors on old sailing ships. The floggings were done on deck where there was room to swing a whip.

Origin: Before box springs were invented, old bed frames used ropes pulled tightly between the frame rails to support a mattress. They would loosen after a while causing you to sleep poorly.

Example: I can’t come to work because I’m a little under the weather today.

Origin: Most long distance travel was done by boat. if you got seasick, you went down to the ship’s hold. The lower you are in the ship, the less you feel the movement.

Definition: Control of a situation over another.

Example: We need to gain the upper hand to have any chance of winning this game.

Origin: Baseball. It used to be decided who went first by one player putting their hand at the bottom of a baseball bat. The opposing team’s player would put theirs directly above it. The two players would repeat this process back and forth until they ran out of bat. Whichever player’s hand was highest on the bat went first.

Example: What are we going to do with all these white elephant wedding gifts?

Origin: Burma! Albino elephants were considered sacred. If you didn’t like someone or wanted to see them fail, you gave them a white elephant. Though considered an honor, no one wanted the expense of keeping a useless, sacred animal.