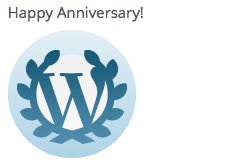 Way back in the aught-aughts, when MySpace was still a thing and you were five years younger, I started a blog. It was actually this blog for those of you who weren’t here then, which is all of you. It was a very lonely place then, just me and the fake castle in the fishbowl.

I didn’t give starting a blog all that much thought, which is probably a good thing. Had I considered the fact that FOG would still be here five years later and there would be over 5,000 people and spambots who subscribe to it, I would have been paralyzed with indecision. As it was though, there was no pressure since no one was reading it besides me.

This blog doesn’t look much like it used to. I don’t have a screenshot of the earliest incarnation, but here’s one from 2012:

ZzzzzzZZZzzzzzZZZzzz. How boring. That was before I even drew a custom header font. The only constant in all that time is the fish. The goldfish has been here since the beginning. It has been my blogging companion and I’ve gotten very used to its dopey eyes and pursed lips (do fish have lips?). I can’t imagine the fishbowl without the goldfish.

FOG has been around for five years. In the relative age of blogging, that’s a really long time to have a blog that is still active. Somehow, I haven’t gotten tired of it yet.

I write way more now than I did when I began. When I started, I thought that every post I wrote had to be infinitely quotable, insightful and magnificent, or I took the opposite approach and posted whatever crap happened to be on my mind. I’ve since found middle ground. I don’t write just to write something, but I don’t write to be quoted or insightful either. I don’t write for an audience, but I invite you in to read it.

I have a confession to make. In the early days, I was obsessed with blog stats. Strangely, that was before I had any stats to look at. Perhaps it is because no one was reading this blog at all that every view meant so much. Now that you’re here, I’m not obsessed with numbers as I once was.

Numbers aren’t important to me anymore. Comments are what matter. The fact that you take the time to read and comment still surprises me. Every time I see that little notification word bubble glow orange, I get excited even though it happens a lot now. It’s like getting multiple packages in the mail every day or daily coffee delivery from a unicorn. In the last year or two, there’s not a single post that has gone unread, unliked or un-commented upon. That still blows my mind.

Pretty durn impressive for a socially awkward misanthrope who hasn’t done a lick of promotion. Where it says best ever views? That was the first time I was Freshly Pressed in 2011. I’ve been Freshly Pressed three times since and I’ve still not managed to top 1,386. The last time I was FP’d a week or two ago, the bump from Freshly Pressed wasn’t much to write home about. FP ain’t what it used to be. Back in my day, we had to Freshly Press uphill both ways.

Most of my followers, like most of yours, are spamblogs, but there are at least five real people who follow me. Hi! There was a time when, as soon as that follower number increased, I would go look at my new follower to see what they were like. Most of the time back then, they were real people. Nowadays, I don’t even bother digging into followers because they’re almost all spamblogs. I check people out when they comment, not when they follow. So, if you’re lurking on this blog and not commenting, I’m not seeing you because of stupid, stupid spamblogs.

When I look at my posts total, I’m always amazed that I’ve written so few of them in five years. I haven’t even broken 1,000 posts yet. Tsk tsk. In some ways, it feels like I’ve been writing posts forever and there should be way more than 885 posts in 1,825 days. In other ways, I’m super impressed by that number since most of them are not throwaway posts. Most of them are posts I took the time to put together and I’m even quite fond of a lot of them.

Anyway, it’s been one hell of a five-year ride. This blog has meant a lot to me, even when I hated it because it mocked my inability to draw readers or write anything of value. It has always been there. It is my friend, companion, confidant and somewhat of an obsession in the sense that the question “what am I going to write today?” is always on my mind. It is where I can really talk about things that matter. It is where I’ve found people who really matter. It is my home, especially now that you are out there reading it, so thanks for that. Cheers and here’s to another five years!