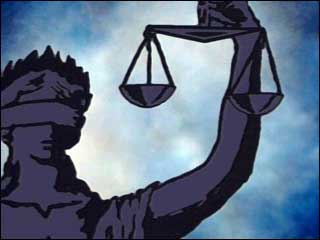 Are there any two words that induce as much dread as jury duty? Why, yes, Goldfish, I can think of many dread-inducing two-word phrases, e.g. malignant cancer, pap test, electric chair, spider face, pantsless clown, etc. Alright, so there are two-word phrases than are more dreaded than jury duty, still jury duty is not fun. It’s really the antithesis of fun.

Allegedly, during the time that the United States Post Office decided to completely ignore my mail forwarding order after I moved, I received a jury summons. At least, that’s what the state of California told me on a postcard that I received in February. In all capital white letters on a bright red background, it said if I didn’t respond to the postcard I could be fined, arrested or forced into a room with twenty pantsless clowns. I’m willing to take the state of California’s word that they sent a summons, but I never got one. All I got was a lousy postcard accusing me of a crime I never committed.

I was offended that I was automatically assumed to be guilty of the crime of disregarding a jury summons that I never got. It is not in the spirit of the American legal system to presume that I was guilty without hearing the facts.

Running late as usual, I basically jogged the .57 miles (0.92 km) from the free parking to where I had to go. It was uphill both ways. I’m not kidding–the first half was downhill, the second half was uphill, reverse. By the time I got to the courthouse with three minutes to spare, I was drenched in sweat.

I handed the bright red postcard calling me a scofflaw to the clerk, who didn’t seem to believe me when I told her I never got a summons. She presumed me guilty–again, the exact opposite of the ethos of the American legal system. I’m sure she’s heard all the excuses before. Aliens, terrorists, a pack of wild llamas…

I put my butt into one of the many uncomfortable waiting room chairs where it would stay until lunchtime. They called two panels before lunch and one after, but my name was not one of the ones they mangled. It got to be 2:30 and I was thinking maybe I was safe since, last time I had jury duty, I sat in one of the many uncomfortable waiting room chairs until 3 pm when they said we could leave. I had only one more half hour to go. Then, they mangled my name. Well, crap.

The bailiff assembled us in a hallway outside a courtroom and called out the last four numbers on our juror ID badges. He gave us number badges. I was the fifth one called and he gave me a big bold five. I couldn’t tell if five was a good thing or a bad thing. I was just happy not to be first.

Eventually, after an interminable time sitting on the world’s most uncomfortable hallway bench, the bailiff brought us into the courtroom in order by number. I found myself sitting in the chairs for jurors that you see in every courtroom drama. I must say, the juror chairs in this particular courtroom were hands-down the most comfortable chairs I had put my butt in that day, but it wasn’t a very high benchmark. My buttocks unclenched a little and thanked me.

The judge went through a ridiculously long speech about what to expect and what was happening. Then, he read the charges. There were seven of them and they were all the same except for the date. The charges were in legalese so I can’t tell you exactly what they said, but the gist of it was “the defendant did willfully make a threat so that the accuser felt fear for his or her safety, or the safety of his or her family.” Seven times, the judge read this paragraph. Seven times, the man sitting at the defendant’s table was accused of threatening someone’s life between Valentine’s Day and mid-March of last year. Seven times.

I found myself getting involuntarily angrier every time the judge read the paragraph again. When I walked into the courtroom, I was unbiased. By the time the judge finished reading the charges, I wasn’t.

The judge asked the first twenty or so jurors five questions in order by juror number: where we live, occupation, marital status, occupation of any adults in our household, have we ever served on a jury before, and if so, did we reach a verdict.

I have social anxiety disorder and a serious public speaking phobia. There were over forty people in that courtroom, including all the jurors, the judge, court reporter, bailiff, clerk, prosecutor, defense attorney and defendant. That’s a lot of people to speak in front of. My heart began pounding and never really stopped until I left the room. I took deep breaths to calm myself and not have a full-blown panic attack.

Fortunately, for the panic minded like myself, there was a cheat sheet with the questions. When it was my turn, I stammered through the answers, not looking up at all. After that, the judge asked the first row, which included me, have we ever been the victim of a crime.

My first inclination was to not raise my hand, because that is always my first inclination, but I was now biased. As much as the legal system has failed me personally, juries should be as impartial as possible and I clearly wasn’t capable of that. I had to make my bias known, so with heart pounding, I raised my hand.

Apparently, I wasn’t the only one. Juror number two told the court how his house had been burglarized.

“Did you call the police?”

“Was your experience with the police negative, neutral or positive?”

“Neutral. They never caught the guy.”

“So, you never went to court. Thank you, juror number two. Juror number five?” That was me. “You’ve been the victim of a crime?” Damn, damn, damn, why did I raise my hand??

“Did you call the police?”

“Yes. There were four warrants for his arrest.”

“Was your experience with the police negative, neutral or positive?”

“With the police, generally positive.”

“You went to court?”

“No. He fled the state and was never arrested.”

A few other people raised their hands and said they were victims, too. One woman had her purse stolen, and a few other people said their houses had been robbed. Mine was the most serious of all the crimes and the only one involving personal injury.

After the judge asked questions, it was the defense attorney and prosecutor’s turn. I disliked the defense attorney. He was smarmy. I found myself inadvertently crossing my arms whenever he spoke. He asked if anyone felt the legal system of the United States wasn’t hard enough on criminals.

I raised my hand again. I was on a roll. “You think the legal system isn’t stringent enough, juror number five?”

“Yes, I do. The guy who abused me was never prosecuted, he fled the state and now all the arrest warrants are expired. He is free and clear forever for nearly killing me.”

“Thank you, juror number five. Anyone else?”

Another juror raised her hand and said that she thought it was biased in favor of the rich. I agreed with that, too, but I didn’t say anything.

After the prosecutor and defense attorney were done with their questions, we took a ten minute break where we were shuffled out into the hallway again.

Waiting there in that hallway reminded me of one the lowest points in my life; when I went to court to get a restraining order the morning after he tried to kill me. As we shuffled out, a lot of jurors looked at me. They were judging me silently. The women looked at me with a kind of arm’s-length pity. The men only looked at me when I wasn’t looking at them. If I caught their eye, they quickly looked away.

I went into the bathroom and closed a stall door behind me. I felt dirty for having to share my shameful past with a room full of strangers. I was angry and felt like a victim again.

Then it hit me that I had just stood up in court and listed off the crimes committed against me, which is something I never had the opportunity to do. I refused to be ashamed again. I refused to feel like the victim again. This happened to me. You people out there may not know how to deal with it, but it happened to me, not you. I walked out of the bathroom and looked all of the jurors trying to avoid my gaze straight in the eye.

They called us back in and I was second to be excused through peremptory challenge after juror number one, whose wife was an assistant district attorney. My juror service was done for at least a year.