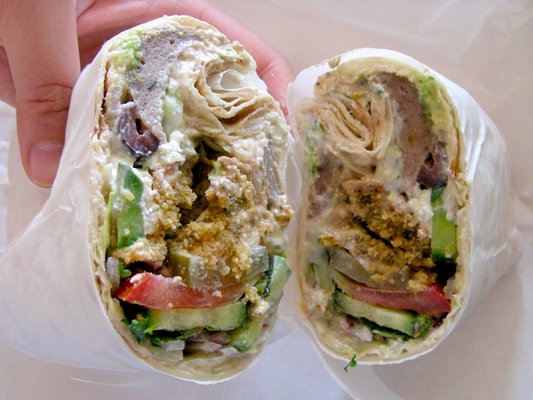 Who is your greatest hero of all time?

There’s this place called Hy Mart that makes the best hummus I’ve ever found in Los Angeles. Being from Detroit, which has a huge population of Middle Eastern folk, I’m quite the connoisseur of hummus and this stuff is good. They also make a fabulous hero sandwich. The best is the Hy Mart Special, which consists of smoked turkey, pastrami, cheese, tomato, lettuce and their special sauce, which in my expert opinion, is a combination of mustard, horseradish and mayo. I get mine without pickles and onions, but the pickles are homemade and people who like them say they’re excellent. Sometimes, they’ll even throw in a little container of hummus for free.

However, I suppose that’s not the type of hero to which you are referring. Honestly, that sandwich is better than most people could ever dream of being. The Hy Mart hero never lets me down. It’s always faithful, predictably good and never fails. Most people aren’t as stalwart as that sandwich. Most people will disappoint you.

To dispense with the snark, my greatest hero is, well… I don’t rightly know. I’ve never really had many heroes, not even when I was a kid. Reading comic books was all fine and dandy, but I knew at an early age that Superman was never going to save me. No one would save me. I had to save myself.

There are people I admire for certain qualities, but rarely does one person have all the qualities that I find heroic. Regular people aren’t superheroes. Humans are a mishmash of bad and good. There is no one who is purely good nor purely evil. We are all a little of both. It’s all a matter of perspective and percentages. Even 51% good is amazing.

While one person may not embody everything that I find heroic, there are a lot of qualities I find worthy of praise in others. There are average, ordinary people out there who do amazing things. I’m not really talking about grand, heroic feats like running into a burning building to save someone, although that is definitely heroic. I’m referring to small-scale heroism, the kind you might not even notice if you’re not paying attention, like letting someone cut in front of you or holding open a door for someone else. The fact that there are still people in this world who are considerate of others is quite heroic indeed. They deserve monuments and holidays, or at the very least, a thank you.