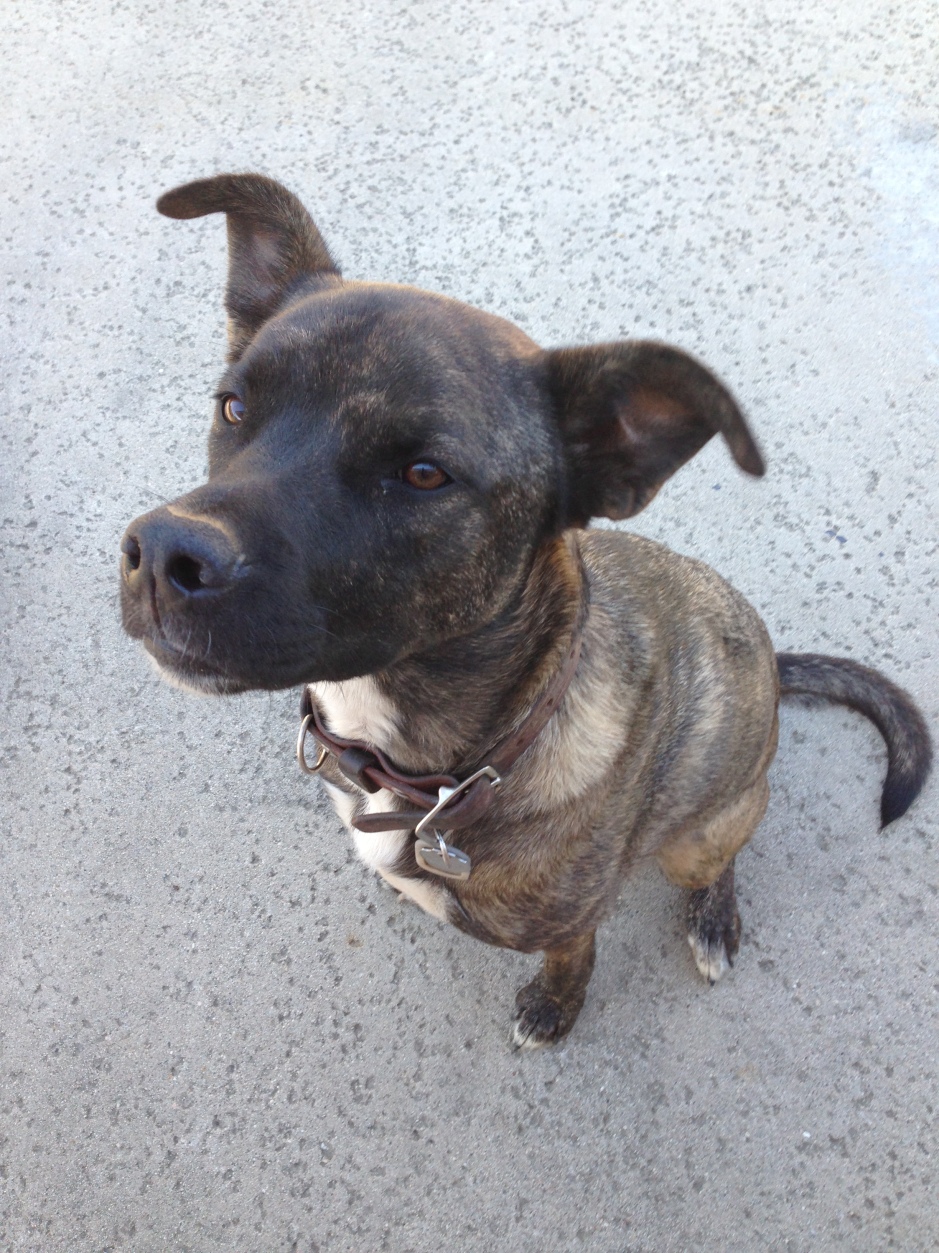 Nearly nine years ago, I walked into a pet store to buy cat food and walked out with an eight pound rescue puppy. I could not walk away from her cage. She was the best spur of the moment decision I ever made.

She helped me through my partner’s death, my dad’s death, and depression so bad I couldn’t get out of bed. She was my hero.

What they take from us doesn’t even come close to the intangibles that they give us. They give their entire lives to us. I would give all the money I have, I will endure all the poop, inconvenience and frustration in the world for that. My dog has quite literally saved my life.
–The Pros & Cons Of Dog Ownership

Pet owners know, whether we want to think about it or not, that dogs and cats and rabbits and other assorted creatures don’t live nearly long enough. We know their lifespans are shorter than ours, but we take them in anyway.

As I cuddled my dog for the nth time today, I realized that, now that Male is dead, I love her more than any living creature and eventually, sooner rather than later, she will also die. One day, I will grieve for her, too.
–Grief Diary: The Love Of A Good Dog

I knew there would come a time when I’d have to say goodbye to my dog, but knowing and living through it are two different things entirely. I thought I was prepared for the death of my dog until I found myself sobbing on the floor in my vet’s office cradling her head in my lap one last time.

Two years ago, my dog got a growth on her belly. The vet removed it and wasn’t all that concerned. Dogs get growths.

Not quite a year later, she got a little pink spot between her nose and mouth. The vet was far more concerned than I expected considering his somewhat casual attitude to the previous one.

He had it biopsied. It came back as mast cell type 2, which is fairly common in older dogs. He removed it, which left her with a 3/4 inch scar on her snout that made her smile crooked and gave her that much more character. He prescribed antihistamine daily to counter further growth. It made her sleepy and sluggish, but her body adjusted to the drowsy effects in a few weeks and she was back to her old self.

A few months after that, she got another growth on her ear. He recommended I see an oncologist. Did you know there are veterinary oncologists? Neither did I.

A very compassionate oncologist prescribed her holistic chemotherapy designed just for dogs. Two weeks later, my dog was not eating, lethargic, and seemingly in pain. The oncologist wanted to see her immediately, but since she was out of town, immediately would be the next day.

I took her to my vet that morning, and on the way there, I made the decision. Thousands of dollars in surgeries and chemotherapy couldn’t save her. All we could do was prolong the inevitable, and not even for her since her quality of life had taken a sudden downturn, but for me, because I could not bear to lose her. It was time to let her go. I still can’t really talk about that day without crying.

It was the right thing to do, putting her to sleep, but that doesn’t make it any easier. My already broken heart broke some more, and what’s worse, this time, I didn’t have her there to comfort me through the grief.

I loved her with my whole heart.

From the moment we locked eyes through a cage when she was only two months old, we’ve loved each other. She has somehow stolen my whole heart, but it’s okay, because she replaced it with hers. No matter what, for as long as she lives, she will love me with her whole being. That kind of love is hard to come by. It is a blessing and I am lucky to receive it.
–8 Things My Dog Has Taught Me

My family’s way of dealing with the loss of an animal is to get another animal. Some may see that as gauche, but they’re wrong to judge. Everyone grieves differently. We don’t think of it as replacing a pet, but filling a vacancy. There is no such thing as replacing a pet anyway; they’re all distinct individuals.

My family’s other pet tradition is the pound. Every animal I’ve ever lived with has come from the shelter or a rescue. We have never purchased an animal. Why buy from a breeder when there are so many good animals in need of homes?

10 days after Isabel’s death, when I was halfheartedly searching for dogs to adopt, I saw this picture on the shelter’s website and said to my sister, “I need to go look at that dog.”

Less than an hour later, I was standing in front of her cage. She was the only dog I met that day since her cage was the very first one. If I believed in such things, I would think it was meant to be. The shelter volunteer who took that picture is the same one who took her out of the cage so that I could meet her.

You can’t really see it in that picture, but she was not in the best condition. She was a stray. She was starving. She weighed only 51 pounds after two weeks at the shelter with regular meals. She had flea bites, still healing, all over her body. She had internal parasites. She was not fixed.

The shelter named her Nutella because of her black and tan coat I guess. I just shortened it to Telly. The picture below was our ride home together. She has no idea she’s on the way to her forever home and is clearly suspicious of who the hell I am and where I’m taking her. 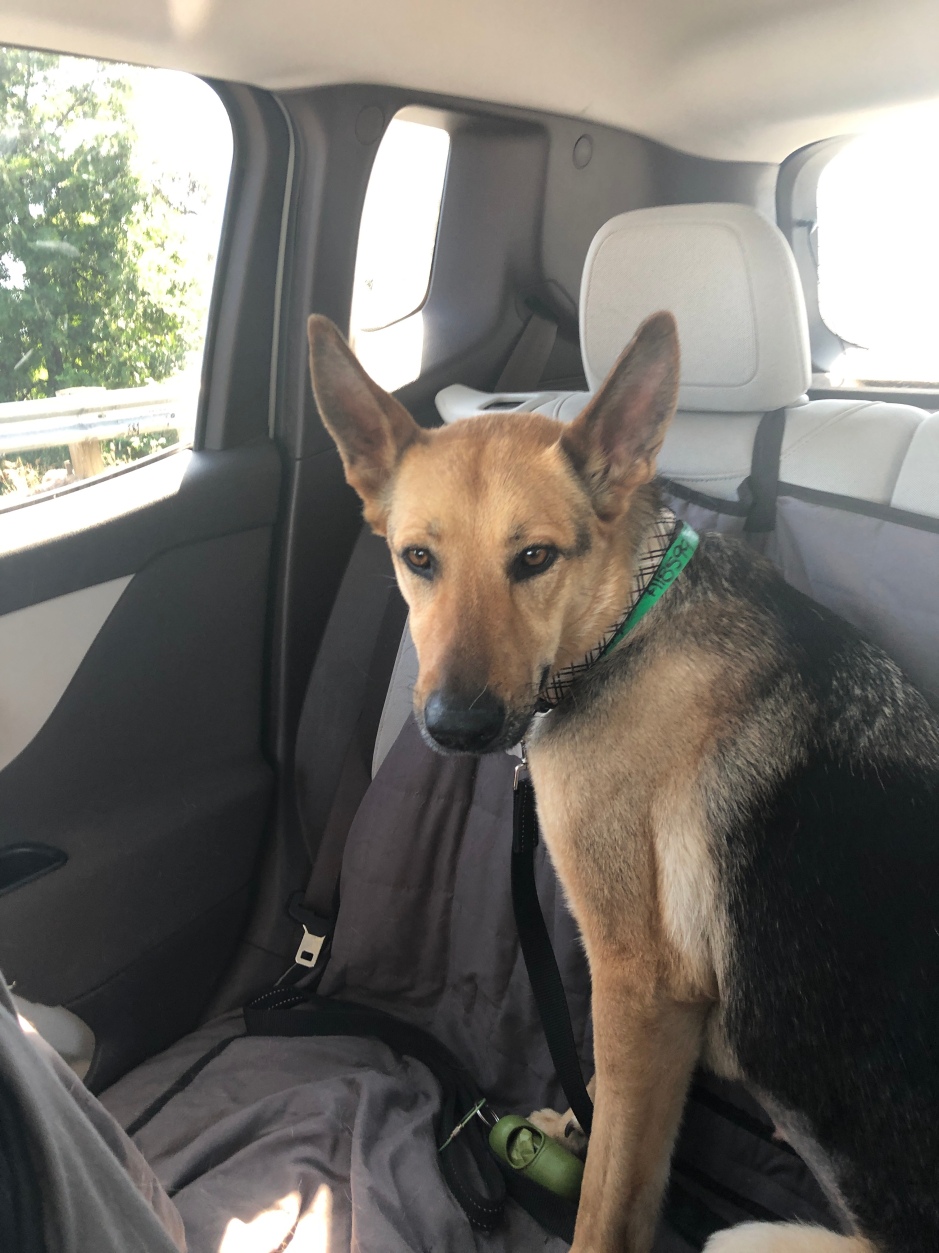 I took this picture the first day she came home and you can see how skinny she is.

Since then, she’s packed on the pounds and has turned into quite the enormous goofball. Inside the house, she’s the perfect dog. Outside, she has fear aggression; she’s afraid of cars and people and other dogs. If you were to run into her on the street, from your point of view, she’d look like a big, mean, nasty German Shepherd dog who wants to eat your face off, but if you were holding the leash, you’d know that she’s actually shaking with fear.

I have no way of knowing, but I’m fairly certain that whoever had her before left her tied up in a yard most or all of the time since she has no social skills and she’s terribly protective on a leash. She didn’t know what to do with furniture or toys. Even though she was neglected and alone for a good chunk of her life, she’s a total sweetheart. She loved me almost immediately. Her eyes say, “Hi, I love you.”

We’re working on her fear of all things outside and she has gotten much, much better, but it’s going to take a long time before she’s over her fear of outside completely. At least she feels safe inside.

I miss Isabel every day. My new dog is not my old dog. Telly can’t replace Isabel any more than I could replace you, but having this big goof around sure has lightened the load of yet another tragic early loss.

Here are some more pictures of my new family member, or as she’s become known around these parts, The Duchess Of Derp. 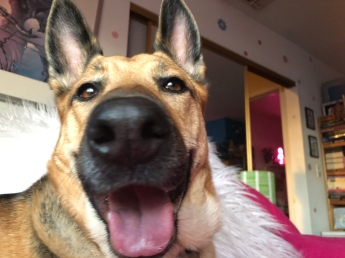 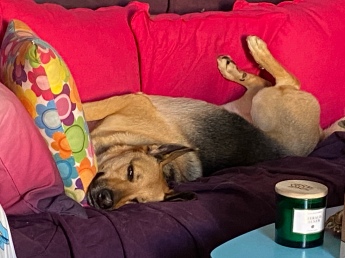 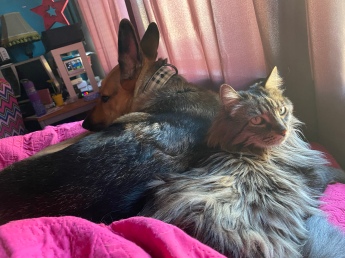 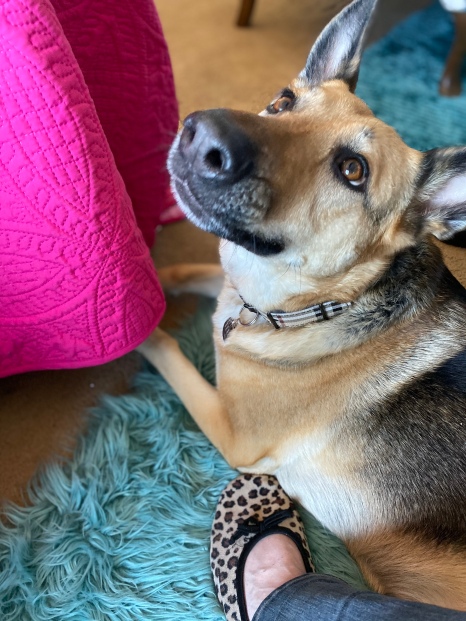 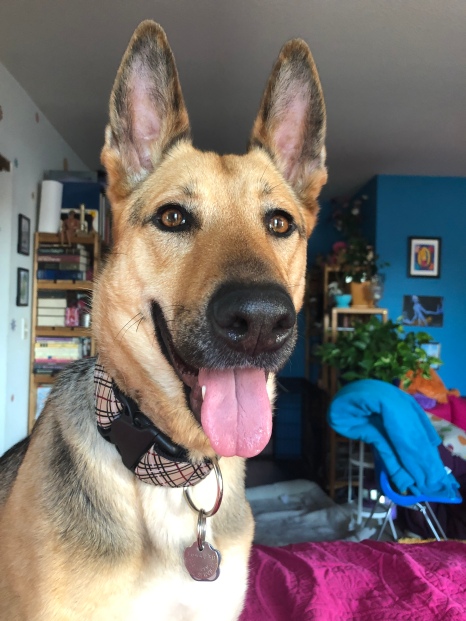