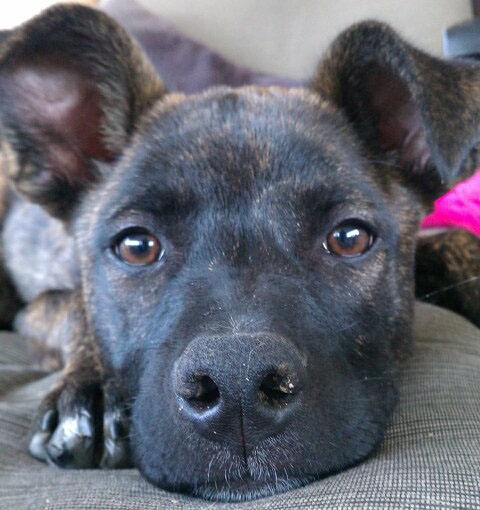 You love me and you know it.

As I cuddled my dog for the nth time today, I realized that, now that Male is dead, I love her more than any living creature and eventually, sooner rather than later, she will also die. One day, I will grieve for her, too.

The thought made me wistful and bitter. Love is a liability that ends in grief. I soon realized that I’m alright with that. Just as, knowing how it would end, I wouldn’t trade the fifteen years I spent with Male, I wouldn’t trade my dog’s brief time for anything.

At best, she’ll live about fifteen years, but even if I knew from the onset that she would only live five years, I’d still have her in my life. Knowing all the heartache her death will eventually cause me, I’d still choose it, because she gives more than anyone, unselfishly and completely.

If someone new to depression asked my advice on how to combat it, I would tell them to get a dog. If you can’t get a dog, get a cat. If it weren’t for my dog, I might not be here.

Whenever I go through a depressive spell–which is more often than not since Male died–and I get to thinking that it’s all for naught, I eventually get around to my dog. Sometimes, the only thing that pulls me out of it is thinking about leaving her alone. She would be devastated if anything were to happen to me. I am nearly the entirety of her universe. Her sun rises and sets with me. As I write this, she is curled up at my feet, the most important feet in her world.

It’s a big responsibility, caring for the life of another, and occasionally, it’s a heavy burden, but then I see that face and it all makes sense. It must be similar to what being a parent feels like. I’ll never be a parent, but I will always have dogs.

There is nothing fair about the world we live in. If it were fair, I wouldn’t have a past like I do and Male wouldn’t be dead. The monsters who abused me would be in prison. The world is not fair and that makes me angry, but when I am, my dog comes over with her ears back and tail gently wagging and the anger melts away. Sometimes, I think that maybe dogs exist to tip the scales just a little in our favor.