Happy Saturday! Come on in and grab a mug of freshly brewed black gold. You can use any of the regular mugs while I use this abomination:

The cute on my mug melted in the dishwasher. The important thing is that it still holds coffee even if it does look like something found at Fukushima. #coffee

I’m not sure how that happened since I’ve had that mug for at least a year. The decal’s structural integrity finally said, “Fuck it. Time to melt.” The strange thing is, I can’t get the melty part off. It’s glued on there like some awful piece of outside art.

Anyway, if we were having coffee, I’d tell you that I woke up this morning and cringed at the thought of going to work. Then, I remembered it was the weekend. I stretched and smiled.

This has not been a very good week, but what week has been lately? I haven’t had a good week or even a so-so week in a while. They’ve all been varying degrees of bad.

If we were having coffee, I’d tell you that the only bright spot this week was, after almost two weeks in the shop, I finally got my car back on Monday.

A year or so ago, I took my car in, because it was having difficulty finding first gear. My mechanic did a transmission flush and service, and that seemed to do it.

A few months ago, I took my car in for the second time for the same problem. The second time, he replaced the computer that controls the transmission. It worked fine for a few months before it failed again.

I took it in for the third time for the same problem and it turned out it was the computer again. The transmission itself is fine. He spent a week working through the manufacturer’s bureaucracy trying to get a new one under warranty. He finally succeed, but it took another four or five days for them to mail it. Once he got the part, he replaced it that day.

I’m very thankful to have a mechanic who would jump through all those hoops for me for free since most places would have just charged me for another one. Still, it left me without my car for nearly two weeks. I was very happy to have it back.

But, that was the high point of my week. If we were having coffee, I’d tell you that I don’t understand how I keep forgetting that I need a new job ASAP. I get complacent until something reminds me like it did this week.

Last Friday, I finished my monthly project and took it in to my manager’s office. She said she wanted to go over some things with her son, my former boss who is not my boss, but thinks he is. I essentially shrugged my shoulders and left for the day with a sense of satisfaction at having finished on time.

Mom and son didn’t “go over some things” until Monday afternoon when they had a meeting about my project without involving me–the art director. On Tuesday morning, former boss/manager’s son called me in to his office and made some changes.

Not to get too technical on you, but say you’re a baker and you just made a wedding cake. It’s a vanilla cake with vanilla frosting with those delicious frosting roses on it. You’re pretty happy with your cake and the fact that you got it done in plenty of time for the wedding.

But, then your boss says, “Even though the wedding is this weekend, we’d like you to turn your vanilla cake into a three-tiered chocolate cake with chocolate frosting. Don’t make a new cake, just make this one chocolate.”

In other words, the changes they made were not small. They were structural changes that required me to waste a lot of time redoing all the things I had already done. Had they made the changes before I made the vanilla cake, I wouldn’t have minded so much, but they made massive changes when it was already finished.

I spent Tuesday afternoon, all of Wednesday and Thursday morning trying to magically turn my cake chocolate. On Thursday morning, Mom/manager sent me an email saying, “When is this going to be done? We need to get it to the printer by Friday.”

Then I saw former boss/son go into manager/mom’s office and close the door. Here we go. Twenty minutes later, they called me in and tried to blame the delay on me.

I said, “It was done last week. I handed you a finished product and you ripped it apart, not even on Monday, but on Tuesday. I’ve spent the better part of the last three days putting it back together again.” Then, I pulled out a copy of the old project and compared it to the new one. I pointed out every little thing I had to do to turn vanilla into chocolate. That shut them up and we spent the rest of the day in terse silence.

Friday, mom and son pretended as if nothing had ever happened and were all sweetness and light. And you know what? I finished that damn chocolate cake on Thursday afternoon as I said I would, and I shoved a piece of it down their throats. Not literally, but it would have been nice.

Pro tip: never, ever work with a mother/son duo if you can help it. You will always lose.

If we were having coffee, I’d tell you that tomorrow marks the one year anniversary of Male’s death, but the 15th is when I found out about it. I mentioned to Ra that I’m not sure which day to mark and she said this:

We mark both. The day the world lost them, and the day we did. ❤

She’s so wise. It’s strange that neither one of us found out about their deaths until a few days afterward. Besides the fact that Male and Dave died less than two months apart, there are a lot of similarities in their deaths. I’m not sure how to mark either day though, since I’ve never done this before.

In other news, I got this in the mail: 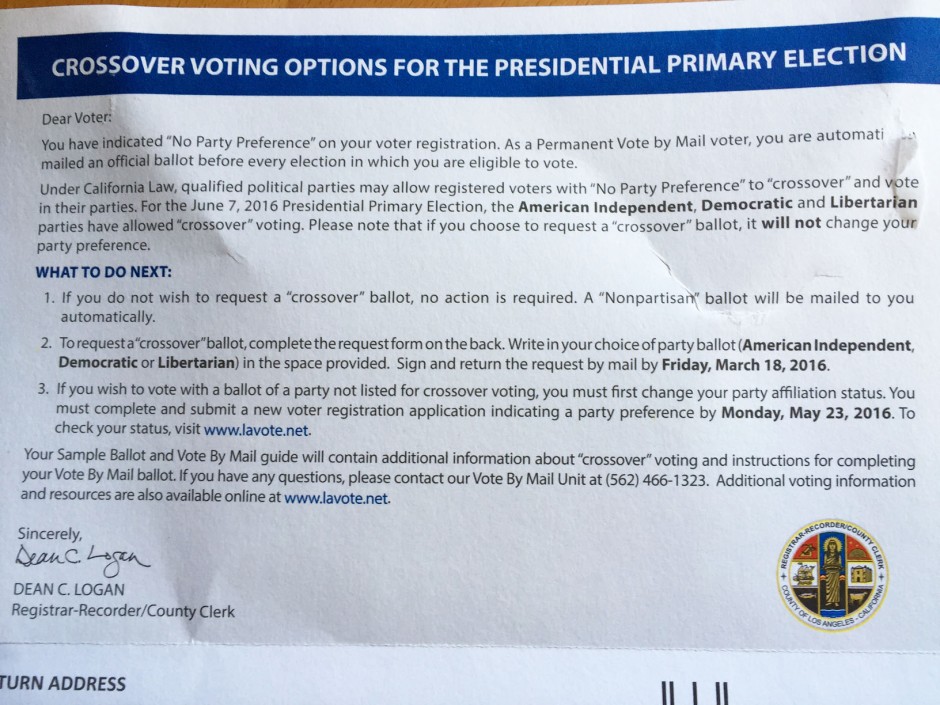 I registered to vote as “No Party Preference” because I’m not much of a joiner. While I am 100% liberal and I almost always vote Democratic, I am not 100% Democratic party. I am not an ideologue and I like to keep my options open.

I don’t think I’ll be requesting a “crossover” ballot since I’d like to vote for Donald Trump. Gah. Just writing that sentence in jest made me throw up in my mouth a little.

So, that’s essentially been my week. I could tell you more, but I’m exhausted now. What’s been going on with you?