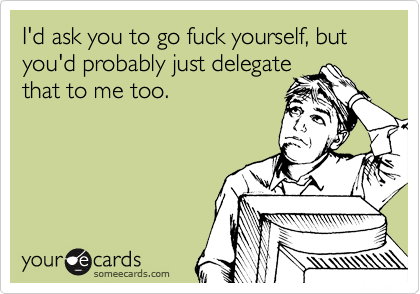 It seems like I’m never not busy anymore. The amount of time I have to finish my monthly projects keeps decreasing. I can’t even really call them “monthly” anymore.

When I started at the company, a year ago August, I had a month and a half to do my projects. They chiseled that down to a month. Now, they’re including the time it takes to proof and do the web coding inside that month, so I have less than three weeks.

I started the latest project September 21st, which means I should have until October 21st to finish it. I finished it yesterday, the 15th. I got yelled at for being behind schedule, even though I’m ahead of schedule.

Last month, I was yelled at, because I didn’t magically intuit that I need to check with the in-house sales manager as to what products I’m promoting, even though I’d never done so before and nobody ever told me I should. Instead, like I did for over a year without incident, I checked with my salesperson, who checked with the sales manager.

A ridiculous email conversation snowball ensued, where various managers kept getting added in to scold me for failing to do something I didn’t know I had to do. How many people does it take to tell me to CC the sales manager on an email? All of them. I’m surprised you weren’t CC’d or maybe you were.

As promised eleventy times to a swarm of managers, I sent the hallowed email with what products I intended to promote on September 29th to my salesperson and CC’d the sales manager.

After so much whiny ruckus, the sales manager responded by promptly ignoring my email. I sent another email on October 6th and another on the 12th. It is now the 16th and the sales manager still hasn’t even acknowledged my emails, let alone approved anything. Apparently, email in New Jersey can only be used for scolding purposes.

I told my manager that the sales manager hasn’t responded to any of my emails and she scolded me for it. Yup, you read that right: I got blamed for the sales manager ignoring my emails. I guess I’m supposed to fly out there on my own time on my personal flying dragon and force him to read my emails.

Our IT guy, who has to code any special offers for the web, is going to Israel in the middle of a conflict (well, to be fair, when is Israel not in the middle of a conflict?) next Friday. I miraculously finished my project yesterday, a full week ahead of time, but it still won’t be done before IT guy leaves, because my coworker who used to be my boss (he isn’t, but still acts like he is) finished his project a hair sooner than mine, so they’re doing his first.

If anything, it’s my manager’s fault for not taking Israel and other projects into account when creating the schedule, but nope; it’s my fault.

The people–there are four of them–who proof my work are not really excellent at proofing. Last month, right before my project went to print, I found three mistakes that no one else caught. Guess who gets blamed for mistakes? Is it the four people whose job it is to make sure there are no mistakes? Of course not, silly!

So, to recap: It’s my fault that my project, which I finished ahead of schedule, won’t be done on time, because Israel, email, proofing, poor scheduling, other projects, goblins and sprites. Everything is my fault.

I’ve come to accept that I will be blamed for everything, mostly because of nepotism. You see, my manager is also the boss and mommy of coworker/former boss. She got him the job over 20 years ago and he’s been doing it ever since. How sad. Coworker/former boss will always win over me, because his mom is our boss.

I used to argue and rail and get pissed about it, and I got written up for it. “Unprofessional attitude,” they called it and they were right. My attitude was unprofessional, because I find it entirely unfair that I have to deal with a Mom/Boss tag team and get blamed for everything other people did/didn’t do.

There’s nothing I can do about any of this. I realize that I cannot win this war; all I can do is leave the battlefield and find another one, preferably without nepotism. I need a new job. This one is sucking what little joy there is out of my day, because what I really need on top of depression and grief is some work-related stress from a job where I am severely underpaid, and now, terribly overworked.

And this, my friends, is why I’ve not been here this week. If you have anything you’d like to blame me for, let me know and I’ll add it to the list. Global warming, inflation, the war on Christmas, Kim Kardashian’s baffling fame… All my fault.