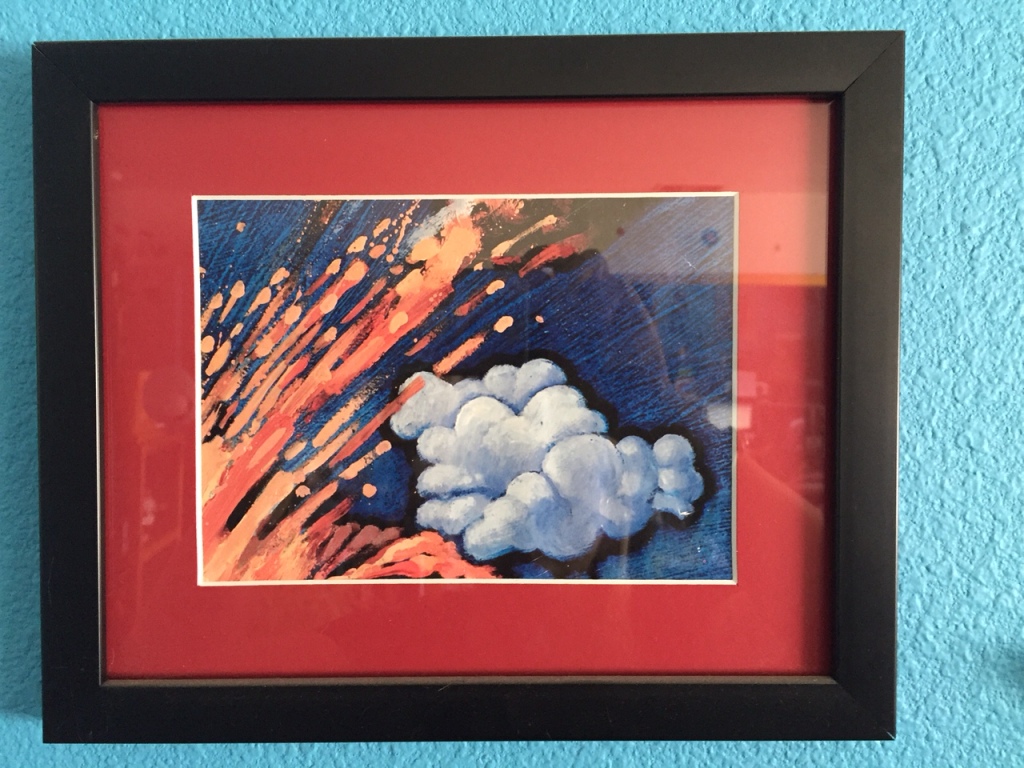 I was raised in a middle class family. Before he retired, my father was blue-collar. He was a union operator on the largest and highest quality lithographic printing presses in Detroit. He’d come home with ink all over his rough and calloused hands that never completely came off. I loved the smell. His job is probably a great deal of the reason I’m now a graphic designer.

When I was small, I remember visiting him at work and being mesmerized by the scale of the printing presses. “My dad knows how to make that thing work.” My father didn’t sit in an office all day pushing numbers around; he made things with his hands and had tangible results of his work.

I was never ashamed of my dad’s blue-collar job. Quite the contrary; it made me proud. I still have a bit of one of the lithographs my dad made framed on my wall, even though he’s been retired for some fifteen years now. Instead of framing the whole thing, in a fit of artistic folly, I cut out just part of the volcano. I used to have two volcano bits, but the other one was destroyed years ago.

My mom, on the other hand, went through a phase of wanting more. Our huge house in Detroit wasn’t in a good enough area to raise children. Our public education wasn’t good enough. All of her friends had husbands who wore suits to work. My dad had permanent ink stains on his fingers.

She enrolled us in private Catholic school even though we weren’t Catholic. When I was fourteen, she moved us to a custom-built house way in the suburbs on a golf course, even though none of us golfed ever, not even after we moved there. The house was so cheaply slapped together that you could hear a fart in the basement from the second floor. It was the type of subdivision that has a name and a gate house. The only differences between the houses were exterior color and which side the garage was on. We went from a block of houses with straight lines to curves and cul-de-sacs for no real reason. There were no fences. There was no privacy. They bulldozed all the big, old trees only to plant new ones.

I absolutely hated the suburbs and still do to this day. They give me the willies. My dad had to drive an extra hour to get to work, but it was a more prestigious address than Detroit. My mom sold it by saying that the schools were better, so they didn’t have to spend money to send me to Catholic school even though we weren’t Catholic.

She wasn’t always that way. When my sister and I were firmly ensconced in school, my mom got a job. She worked in the arts. At fifteen, when she forced me to start working, she got me a job in the arts through her contacts. She worked with liberals. She was a moderate.

Something happened when we moved to the suburbs. Something in her shifted. She went from moderate to conservative and stayed there. She found Jesus out there. I never had any use for him myself. The more conservative and greedy she got, the more liberal and humble I became. Though, I came by it honestly enough through the genetics of my father; he never cared about material possessions.

When I was in high school, and my mom and I were both working in the arts, there was a Republican gubernatorial candidate who pledged to cut funding for the arts if elected, as if that was some sort of selling point. My mom and I talked about it and how we both would likely lose our jobs if he was elected. I was too young to vote. She voted for him anyway. We both lost our jobs a few months later. Still, she was not dissuaded. She kept going down the Conservative Party line and our political paths parted ways forever before I could even vote.

Politics and religion are on the No Fly List, a list of topics I’ve created and honed over the years that I never discuss with my mom. As long as we don’t talk about the things on that list, we get along fine. Other topics include sex, tattoos, her mother being an awful human being, the child sexual abuse I endured and she denied, and most women’s rights issues, including, for some reason, pay disparity. As a woman in the workplace, she somehow seems to think it’s appropriate if she’s paid less for the same job as a man.

The other day, my sister and I were driving past a newly constructed Hobby Lobby. I have never and will never set foot inside a Hobby Lobby, because of their religiously-derived and now Supreme court-justified fervor to take reproductive rights away from their female employees and make them pay for birth control themselves.

As we drove, my sister related how Mom had told her that they were getting a new Hobby Lobby in their small conservative community in northern Michigan, whereupon my sister blurted out, “Don’t shop there! Hobby Lobby is EVIL!” but she couldn’t remember why. I said it’s probably for the best that she couldn’t remember the reason, because mom might be more inclined to shop there if she knew.

My sister said that I might be surprised. None of us would exist if it wasn’t for abortion.

When my sister was in nursing school, they made her do a study of her family medical history, and she discovered that our grandmother was pregnant before she had my uncle and mother. The pregnancy would have killed her had she carried it to term, so she had an second-trimester abortion. Had she not done that, my mom, uncle, sister, two generations of cousins and me wouldn’t exist.

“I think you’d be surprised about mom’s opinion of abortion.”

I suppose it proves that you never entirely know anyone, not even someone you’ve known and lived with for decades. Still, I think I’ll keep that topic on the No Fly List for now.