I don’t have a yard and I have an (almost) four-year old dog with lots of energy. My options are to hire someone to exercise her, take her for a 10 mile walk every day or go to the dog park. I can’t afford a dog walker and I don’t have time for 10 mile walks in the morning since I’m always running late, so the dog park it is.

In my daily visits to the dog park, I run into a lot of the same people. The strange thing about dog parks is that I know most of the dogs by name, but I know hardly any of the people’s names, so I’ve assigned them nicknames based on behavior.

There’s a dude with a boxer who goes to the dog park several nights a week. Instead of letting his dog play with other dogs or throwing a ball around, he brings a laser pointer. I’m not a fan of using laser pointers with dogs. I think they’re cruel and here’s why.

When I started going to the dog park, there was an argumentative jerk who also used a laser pointer to exercise his dog. In the process, he broke someone else’s boxer.

Laser pointers are cruel for dogs, because no matter what, they will never, ever catch it. Dogs need tangible results, not a thing that they will never catch. Throw a damn ball instead.

So, whenever I see laser pointer guy and his boxer at the dog park, I go to the other end just in case my dog ever decides to chase a little red dot she can never, ever catch.

The mantis is a 40-something woman. She spends hours at the dog park every day and she’s been going there nearly as long as I have. Every few months, she’ll get cozy with a male dog owner, then, after a few months–or sometimes, only a few weeks–the men disappear and you never see them again. I don’t know what happens, but it never seems to end well.

I call her the praying mantis since it’s one of several insect species where the females devour their mates.

I’ve written about The Dog Whisperer before, so I’ll just quote myself:

There’s a guy who goes to the dog park with a year old dog named Carter. Carter is a pretty good dog, but he had a habit early on of grabbing onto dog’s necks when playing. This is not a good habit. His owner tried to break him of this habit by screaming CARTER NO at him every 5 seconds. He still does this even though Carter has broken himself of this habit. I called Carter’s owner the Dog Whisperer one day specifically because he is the antithesis of whispering and getting dogs to do what you want. A few days later, I wondered aloud whether Carter actually thinks his name is Carterno. So, now whenever screamy guy shows up, the people at the dog park say The Dog Whisperer is here with Carterno.

Just last night, there was a girl there who purported to be a regular. She seemed intent on impressing everyone with the fact that she was a regular. Yet, I’ve never seen her before. She didn’t know me or my dog and I go every single day.

Being a regular at the dog park really isn’t anything special. It’s not a great feat. You don’t need a special skill-set or to train like you would for a marathon. Basically, all you have to do is go. I’ve been going regularly for almost four years; several times a week for the first two years when I still had a yard, and every night for the last year and a half. Yet, I’ve never seen this girl or her dogs before.

Max is one of the few people’s names I know. He is 95 years old and in perfect health (for a 95-year-old). He walks under his own power and doesn’t even use a cane. He has a total sweetie of a Belgian Shepherd named Charlie.

The only part of Max that is starting to show his age is his brain. He repeats himself a lot. Every time I see him, he introduces me to his dog, “This is Charlie. He’s a Belgian Shepherd.”

At first, I used to say, “I know,” but now, I either pretend not to know or I preempt Max by walking up to Charlie and saying his name.

Max is 95 years old. The way I see it, if you live to be 95 years old, you can do whatever the hell you want. I cut him some slack.

If you know anything about dogs, you might know that dogs on leashes around dogs not on leashes tend to get a bit aggressive or fearful or any of the negative emotions dogs are capable of having. While that makes him a bad dog trainer, it has nothing to do with the “asshole” part of his name.

This is not the sign on the gate at my dog park, but the rules are similar: 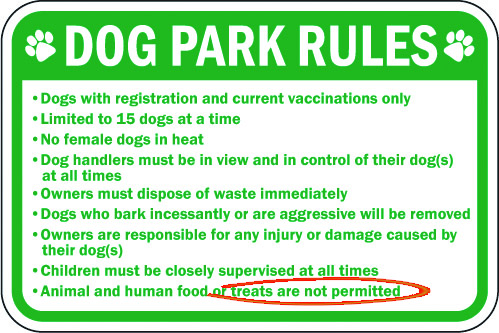 Asshole Dog Trainer had treats. My dog and her amazing nose sniffed them out. Instead of doing any of the reasonable things he could have done to get her to go away (including waiting until I got over there since I was about twenty yards away and walking towards him), Asshole Dog Trainer gave my dog a knee in the snout.

But, that’s not the worst of it. When my dog didn’t go away in the five seconds he allowed her, he air horned her in the face.

Contrary to what it says on that packaging, air horns should not be used for dog training since they’re really loud and dogs have excellent hearing. The air horn is a last resort in case of attack. And, if you do use one, you never point it directly at anyone, let alone point blank in the face. No one likes being air horned in the face, especially when you’re a dog who can hear a lot better than us humans.

My dog wasn’t attacking him. She was sniffing the treats he wasn’t even supposed to have, and after kneeing her in the face, he air horned her. I was absolutely enraged. I couldn’t even go over and say anything to him, because I could not trust myself not to grab that air horn and quite literally shove it… repeatedly.

The next time I saw him, I went off on him, but by then, it was too late. The damage was already done. Ever since, my dog has been terrified of him. Whenever he’s there, she won’t go more than two feet away from me. If he ever comes near my dog again, I can’t be responsible for not killing him. ASSHOLE.