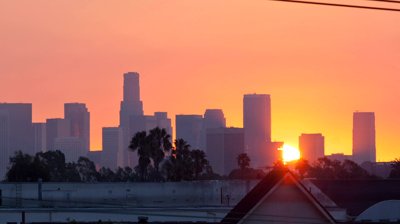 I survived the onslaught of parents, only a little worse for wear. I’ve walked a million miles, seen a million tourist attractions that I normally ignore and spent all my money. I’ve also packed on about three hundred pounds since we’ve been eating very, very well. Much better than I’m used to.

I’ve been up this coast and down that one. I’ve seen this amazing view of Los Angeles and that one over there. I’ve been to this museum and the other one, too. I saw almost two thousand-year old things and outlines of people buried in ash from Pompeii and wondered how awful it must be to have your entire civilization wiped out in not even twenty-four hours.

The Pompeii exhibit is at the same place where Endeavor lives. I really wanted the space monkey last time I was there to see Endeavor, but I couldn’t justify $20 for a stuffed monkey. Well, this time, seeing as I’ve been spending money like an heiress anyway, I said what the hell, and bought the space monkey.

So, now I have a space monkey of my own, complete with NASA spacesuit. Badass, bitches.

I’ve been to Las Vegas, the Getty Center, the Science Center, The Griffith Observatory and all manner of Hollywood attractions. I’ve seen a lot of touristy things this city has to offer, which is a ton. I’ll never see all the touristy stuff in this city and I’m okay with that.

I decided something while traipsing all over hither and yon; I don’t want to live in this city anymore. For fifteen years, I’ve driven these streets and seen the sights, and it’s coming time for a change. Driving around Los Angeles just makes me sad. The potential and hope that was once around every corner is gone; now, only ghosts of times and people passed exist.

Come tonight, the parental units will be away on a plane, back from whence they came to the frigid northern climes. My mom will cry, because she always does. My dad will leave California for most likely the last time.

My dog with miss them and in a way, so will I, but I’ll also be happy not to have a queen size bed in my living room, to stop spending money like a drunken monkey and not to have to go to tourist traps anymore. There is definitely something to be said for having your space to yourself.

And, on the 15th, I await the arrival of Male, but I don’t have to entertain him nor really clean my house.

Entertaining people is exhausting business. How were your holidays? Did I miss anything?