This one's ONLY 25 THOUSAND DOLLARS. (epson.com)

As you know, I opened an Etsy shop yesterday. Nobody’s bought anything yet. Sadface. This turns out to be a good thing, because I still don’t have any shipping envelopes. Typical of me to open for business without actually having everything I need.

Anyway, in the process of opening for business and having to produce things myself instead of lazily letting Redbubble do it for me, I’ve been researching different printer ink, archival paper and well, printers.

I have a workhorse Canon photo printer. It has printed everything I’ve asked it to without ever putting up a fuss. It never jams and the replacement ink, because you can replace them individually and even refill them, is relatively inexpensive, but it’s about ten years old and print technology has come a long way since then. And so has ink. Do you know how many varieties of printer ink there are? I don’t either, but it’s a lot.

So, I’ve been looking at new printers as a sort of Christmas present to myself even though we haven’t even hit Halloween yet.

To the spreadsheet mobile, Batman! 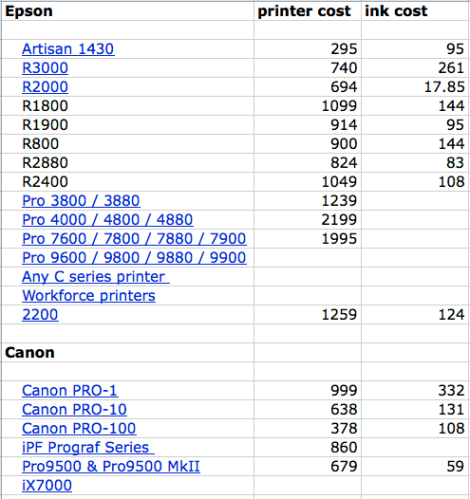 Those are all printers that print with pigment inks, which last waaaay longer than dye inks (which is what all other inkjet printers use). That’s all fine and well and good, but I can’t really afford any of that. The cheapest one on the list is $295 and I can’t afford that.

I can’t justify dumping $300 on a printer when I have a perfectly good printer. True, my printer is incapable of printing anything that will last over 98 years, but does anyone really care about that? I mean, it’s not the Constitution of the United States of America we’re printing here; it’s a duck: 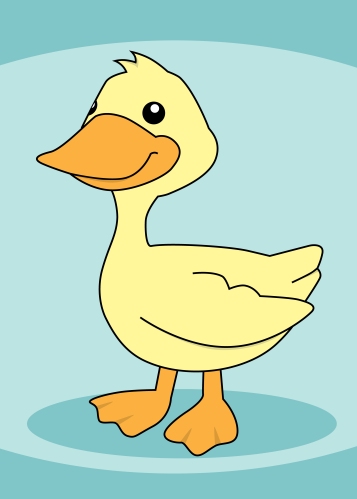 Does anyone really care if my duck print only lasts 98 years and then fades? That’s not really the type of heirloom you pass down to your grandchildren.

“Last will and testament: I leave all my worldly possessions to my dog except the duck print which will go to the Smithsonian Institution.”

Are we getting a little big in the head here thinking a) that anyone wants a duck print at all and b) if they do, they’ll want it to last FOREVER. After 98 years, they very well might be thankful that it would fade.

But then, you think of those surviving Sumerian tablets, and perhaps they were the duck prints of their day. Perhaps some Sumerian dude like me cheaped out and scribbled on a leaf, while the guy’s scribbles on the tablet below have lasted because he sprung for the clay.

Way back in the “spreadsheets are fun!” part of my brain, I’m almost obsessed with the concept of leaving a legacy. I want little pieces of me passed down from generation to generation, whether it be words I wrote or a stupid duck print.

So, I think I’ll compromise. I’m not going to spend $2,199 on a printer, or even half that, but if I find ink that will last longer than 98 years, I might give it a try. What do you think?

Do you ever talk yourself into buying silly things? Are you a maker of spreadsheets?