I nearly typed Screw You, Cindy Lou Part 2: Electric Booglaloo, but rhyming that many times in one title would throw the earth off its axis and force the moon to drift off to the orbit of Venus, leaving us to wobble through infinite space to hang out with Pluto in the No Longer A Planet Club, if we didn’t run smack dab into lard-ass Jupiter first. In any event, not good things come from rhyming five times in one title.

Crap, I typed it anyway, didn’t I? Well, here’s hoping for the best. *Waves at Mars as we pass by.

Since we’re still seemingly on our normal rotation around the sun for the time being, while we’re waiting for Jupiter, allow me to regale you with the epic, albeit ultimately, anti-climatic fizzle of the story of the traffic ticket.

Approximately a light year ago, in the house of Leo when Virgo ascended 18°57′, I received a traffic ticket. Part 1, the receiving of the ticket part, can be found here, but it went a little something like this: 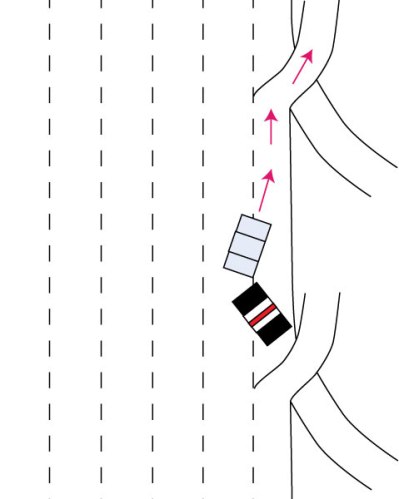 I was pulled over by the teeniest cop in the largest vehicle for “unsafe lane change,” even though a) I was already on the freeway, and therefore, had the right of way and b) I had my turn indicator, signal, blinker, or whatever they call it in your neck of the woods, firmly in the blinky position, thereby signaling that I was intending to get over to the right.

I probably wouldn’t have fought the ticket–I would have just paid it and done traffic school in order to avoid having to stand up in court since public speaking is hell to me–if it were not for the second part of the ticket.

You see, when Cindy Lou Cop pulled me over and I reached in my bag for my wallet, I found that particular part of my bag to be as bare as Mother Hubbard’s cupboard.

I had forgotten my wallet. I do this from time to time seeing as, every night, I take my dog to the dog park. Before I go, I switch my shoes to my dog park shoes and switch the important contents of my bag to my dog park bag, because dogs are gross and things that aren’t machine washable are best left at home.

It just so happens that, on the eve of my acquaintanceship with Cindy Lou, my brain farted and I forgot to put my wallet back into my work bag. Whoopsies. So, when Cindy Lou asked for license, registration and proof of insurance, I was unable to offer any of the above.

Cindy Lou ticketed me for no proof of insurance. This is what is called a fix it ticket, where you can show the court that you did, in fact, have insurance at the time and be on your merry way. Unfortunately, due to the “unsafe lane change” allegation, I was unable to fix my fix it ticket. I had to go to court.

Thus, began an epic 14-month, 3-day, and 42-minute journey though the wretched bureaucratic nightmare that is the United States Court system. This journey is not an adventurous epic like Raiders Of The Lost Ark, but a boring epic like Gilgamesh, so we’ll skip over most of the details.

It started with my request for a three month extension since I was not prepared for the journey and still needed to pack. Once my reprieve was over, I logged onto the court website where a computer glitch allowed me to pay bail, schedule an arraignment date and close my case at the same time. How can a case be both closed and open? I don’t know. Ask the Superior Court of Los Angeles.

I only discovered my case was closed when I showed up for the arraignment. Bail and arraignment are such heady words for a piddly traffic infraction.

I demanded satisfaction, and they reopened my case and scheduled another arraignment, which was exactly like the first. How can someone be arraigned twice for the same traffic ticket? I don’t know. Ask the Superior Court of Los Angeles.

At the second arraignment, my case appeared to be open. I spent nearly three hours in court just to say, “Not guilty, your honor,” wherein they scheduled an actual trial date, which was this morning.

So, this morning, I trundled off to court for the third time. At least I knew where I was going and which bathroom has the shortest line. Court starts at 8:30. Sometime after 8:34, which was the last time I looked at my watch, they ushered us into the courtroom and took roll. About half of the names said “here.” The other half said nothing, because they didn’t show up for trials they had requested themselves. G’jorb.

After being delayed for an interminable amount of time, they told us that things would be delayed. They were still waiting for cops and alleged criminals to show. How lovely. It’s always some who ruin it for everyone.

At 8:52, the clerk called a name and said, “You posted bail and your officer hasn’t checked in yet. I just need to verify your address, so that if your officer doesn’t check in within the next ten minutes or so, we know where to send your bail. Are you still on Asshat Boulevard?”

Then she called another name with the same spiel. And another. And then, she called my name and asked me if I still reside on Glorious Redemption Of The Common People Avenue. Yes, I do!

I sat there fidgeting nervously for the next eight light years. I just had to wait it out. I silently recited the mantra, “please, don’t show,” to no one in particular, besides a Cindy Lou I suppose. For a completely non-superstitious person, I silently recite mantras a lot. They never work. That could be why I’m not superstitious.

Knowing my luck, I would get the “your officer hasn’t checked in” speech only to have Cindy Lou confirm her presence with ten seconds to spare. Every time the door to the courtroom opened, my head swiveled around like a guided cruise missile. I couldn’t remember what Cindy Lou looked like other than the fact that she was diminutive and female. None of the cops in the shop were female nor particularly diminutive.

Then, the judge arrived. All hail the judge. She said some words I don’t remember and called out the same four names that the clerk had, mine among them. “Your police officers failed to show. You are free to go.” Well, Tally fucking ho! I’m outta here!

And that was that. Court is over, my alleged crimes have been expunged and I didn’t even get to face Cindy Lou. Even though I didn’t have to pay the fine or speak in court, I still had to spend 14-months, 3-days, and 42-minutes with this hanging over my head, so I feel fully justified in saying, “Screw you, Cindy Lou, wherever you are.”