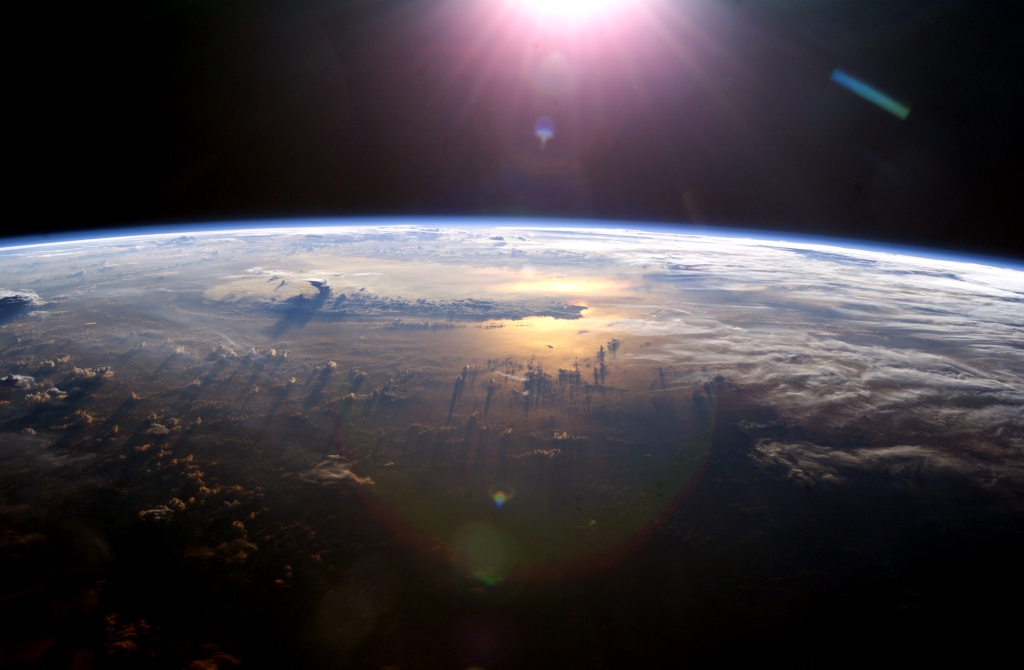 View of Earth from ISS. (apod.nasa.gov)

That title makes absolutely no sense! Fooled you! I just didn’t want to do another of those boring “Things I’d like to do before I die” or “bucket list” lists, which is precisely what this is–a boring list of buckets. Although, according to wikipedia, “There are many types of buckets.”

This list isn’t so much about buckets as it is about things I’d like to do before I kick one, or to be more specific, kick the bucket. What do people have against buckets anyway? They’re useful tools for carrying unwieldy things. Why do we go around kicking them?

Anyhow, some of these things are more achievable than others.

1. Finish writing a complete work of fiction. I’ve written lots and lots of short stories. I like short stories because I have the attention span of a gnat and because you can just drop people in the middle of a story and leave ’em hangin’.

You can’t do that with a novel. Readers tend to get pist when they invest time reading 400 pages of a book and you just leave their protagonist bleeding on the floor, but you can totally do that with short stories. Also, you don’t have to really worry so much about story arcs, character development, exposition, dénouement or other French words.

OK, so, maybe I should just write a book of short stories instead. Maybe I’m like Anton Chekhov, a better short storyer than long-former.

2. Buy my own action figure. I’ve always had a fantasy that I could walk into a comic book store or the like and furtively, possibly while wearing dark sunglasses and a fake mustache so as to go undetected, buy an action figure of a character I created. Yeah, I know, there are stupid cheaty websites where you can have your own action figures made, but that’s cheaty. I want to stand in line behind twelve-year olds buying my action figure, too. I’m talking mass-produced, baby!

I have already been immortalized as a comic book character though, so I can tick that box off. A friend of mine did this awesome drawing of me (even though I look angrier than I should be with a hot cup of coffee and a sword–two things that make me happy).

4. Meet some family. There’s a whole half a family that I’ve never met because they live on a different continent. On my dad’s side, I met my grandparents before they died; his sister, who is also dead; and her two children, whom I haven’t seen in more than twenty years and could be dead as far as I know. That’s it. I’m sure there’s more to the Finnish side of the family out there. Eh, they probably suck anyway.

5. Own a house. I would like to own a tiny house on a tiny plot of land so that I could really, honestly say, “Get off my lawn!” and have it actually be my lawn. I’ve never owned any property. I’ve always rented like a total sucker. Although, if I owned my own house, I would foster animals, which means I’d have twenty of them in no time, so perhaps it’s for the best.

6. Visit every continent on earth. I don’t need to visit every country–that would be a very long trip since I’ve only been in eight–but every continent would do. So far, I’m two for seven. Europe and North America are the only ones I can check off and I was born on one of them. How sad is that?

7. Dip my toes in every ocean. I’m two for five on this one. Quick! Can you name all the oceans? Arctic, Atlantic, Indian, Pacific and Southern. I’m intimately familiar with both the Atlantic and Pacific, but I’ve never met the other ones. Hello, oceans. Nice to meet you. Let me jam my foot in you, please.

8. Visit every state in the U.S. This one seems pretty achievable since I’ve already visited 48 of the 50 states, not including unincorporated territories like Puerto Rico. The problem is, the last two states on my list, Alaska and Hawaii, are pretty difficult to get to. Neither of them border other states and one is in the middle of the damn Pacific ocean (guess which one).

9. Blast off into space, space monkeys! I want to leave this rock just once before I kick it. Even just going up on a shuttle, doing one orbit around the earth at the height of a satellite and coming back down would be enough. I just want to go into space for five minutes before I die. I want to see this with my own eyes:

Is that too much to ask? Oh, right. I’m not a billionaire. I guess I’ll have to become one first.

10. Stop hating. I don’t ever expect to forgive and I’m alright with that. There are some people who don’t deserve forgiveness. However, I’d like to stop hating. I’d like to be able to process everything I’ve been through and turn it around to help others. I’m still too mired in my own GRRR to be able to help anyone. I’ve been trying for years, but I’m really no closer to not hating. I’ll keep at I guess, and one day, maybe I’ll turn into a filthy hippy. Tada!

What are your unpossible pre-deadening achievements?