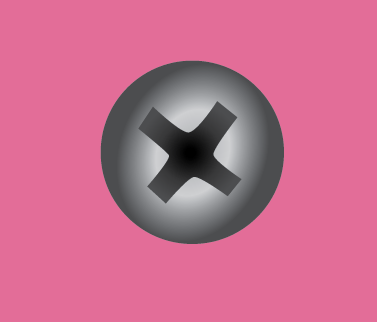 Inspired by Blogging University, even though I’m not technically enrolled (they send me emails anyway), I spent the better part of the day yesterday designing elements for this blog that I’ll probably never use. I have a folder of FAIL like so:

I’m very fond of my new social media sign thingy, which you can see over there in the sidebar, but the problem is, it’s limiting. It’s hard to come up with things that match it cohesively without doing the same thing over and over.

Most of those attempts in the Folder of FAIL are from yesterday. One of them was this behemoth, which, while very cool in a 60s Las Vegas Rat Pack sort of way, isn’t at all what I need:

Part of the problem is, I’m a perfectionist. You can’t really see it in the sidebar, but the signs are held on by nails. Very detailed nails:

Why would I go to such lengths to even draw cross hatching on the nail heads when, in the finished product, they’re only a few pixels across? Well, I don’t know, but my insanity doesn’t stop there. On another failed design I did yesterday, I used screws:

Those screws were this big in the finished product:

Can you see any of the detail on those black dots or even tell that they’re supposed to be screws? Of course not, yet I actually drew screws that are so tiny when finished that they’re indistinguishable from a two-dimensional circle. Why did I bother drawing screws when a black dot would have worked just as well?

This isn’t a new phenomenon either. A long time ago, I did portrait business cards for Male. He’s wearing a suit and always wears button collars, so I actually put a button collar on the portrait, which is business card sized.

Printed on a business card, it looks like this:

We’re talking about maybe five pixels, yet I drew a damn button and buttonhole.

I used to have a 1970 Buick Skylark. When I first started drawing in Adobe Illustrator, I lovingly crafted a portrait of it. It’s one of the first drawings I ever did in Illustrator.

The amount of detail that went into that drawing is ridiculous. There are hundreds and hundreds of layers.

Yet, every time I look at it, I cringe a little and want to redo it because it’s not nearly as clean as I’m capable of now.

It’s just the way I was raised. My father was a skilled craftsman who had no sons. He taught my sister and me everything. The reason I know that nail heads typically have texture and what screws look like well enough to draw them without reference material is because of him. My dad is a bit of a perfectionist, too. I’m going to blame my perfectionism on him. He would be thrilled to know that I actually drew little screws instead of black dots. Atta girl.

My dad does nothing fast. He has many sayings, one of which is measure twice, cut once. He’s meticulous in his planning and execution of finished projects. The things he builds are sturdy and will outlast the human race. He is not in favor of sacrificing quality in the name of speed.

So, when I set out to draw things, I use that same sense of perfectionism instilled in me by a father who knew what the hell he was doing. Whenever I build or fix or draw anything, I tend to measure the results against my father’s standards. Dad would be proud or dad would slowly shake his head.

I also inherited his “you never know when you might need something” mentality. I’m not a pack-rat, but I do keep different versions of things lying around. Even if I don’t end up using anything in the folder of FAIL, I will have a Phillips head screw already drawn should I ever need one, and odds are, eventually, I will need one. Nothing really ever goes to waste.

Now back to feeding The Almighty Folder Of FAIL with me.

How do you feel about perfectionism? Are you a perfectionist or are you more of a “pffft, good enough” type? Am I crazy for drawing tiny screws?