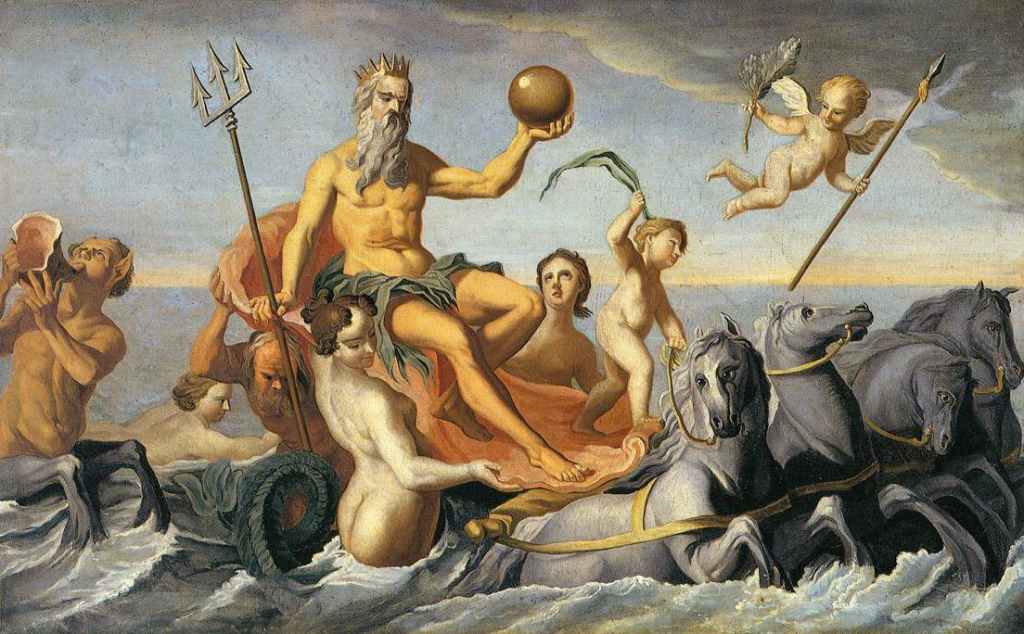 The Return of Neptune - John Singleton Copley, 1754 Image from wikipaintings

This week’s Prompt For The Promptless is cryptozoology:

Cryptozoology is the search for legendary animals, usually in an attempt to evaluate or confirm the possibility of existence. This includes looking for living examples of animals that are considered extinct, such as dinosaurs; animals whose existence lacks physical evidence but which appear in myths, legends, or are reported, such as Bigfoot and Chupacabra; and wild animals dramatically outside their normal geographic ranges, such as phantom cats. The animals cryptozoologists study are often referred to as cryptids, a term coined by John Wall in 1983.

There are so many bizarre animals that exist on this planet that it’s entirely likely that we’ll find evidence of more. Imagine how weird giraffes would seem if they didn’t exist.

Fish spend their entire lives underwater. Bats use sonar to see. Elephants have prehensile noses. Cats have night vision. Some reptiles, amphibians and invertebrates can self-amputate and regenerate body parts. Chameleons have eyes that can move independently of each other, prehensile tails and skin that can change color depending on the background.

When you really think about it, that’s fucking weird and we haven’t even mentioned the platypus or the mole.

Over ten years ago, NASA discovered 3-foot-long, wormish creatures at the bottom of the ocean that have no mouths, intestines or eyes. As far as we know, they are the only creatures that derive their energy from the planet itself, not from the sun. We didn’t even think that was possible until we found them.

Just last year, NASA scientists found an arsenic-based lifeform. The bacteria GFAJ-1’s DNA works differently than every other organism on the planet, from the smallest amoeba to the largest whale.

So, yeah, science is rad. And so is evolution. Where life can exist, it will. Life adapts.

The overwhelming majority of this planet is uncharted. We’ve pretty much traipsed our curious apish asses all over the land. There are very few above-water areas that we haven’t managed to invade yet, but most of the remaining unexplored land is deep underwater. Humans don’t have the capability to explore it without being crushed by the pressure of billions of gallons of water.

There’s so much unexplored territory out there that’s there’s no reason to believe that spectacular, never-thought-of-before creatures couldn’t exist. It’s almost guaranteed that they do. We just haven’t found them yet. Because most of the unexplored planet is underwater, it is far more likely that there are sea gods or mermaids living undersea, than bigfoot or unicorns on land–a fact that makes me very sad indeed since I am a fan of the unicorn.

I keep holding out hope that the shrinking unexplored by man-ape areas are where all the mythological creatures live. I suppose it’s also possible that they move somewhere else when we explore an area, and then move back once we’re done, knowing that we’ve already looked there and might not look again for a while. That sounds like something a unicorn would do. Unicorns are crafty.

We know so little about the planet we inhabit and the space that surrounds it. We landed on the moon, a remarkable accomplishment, but we still can’t explore the bottom of the ocean in person. We’re discovering new things all the time and that is beyond awesome.

The species of Homo sapiens is infinitely curious. We want to know what, when, where, why and how about everything. I think it’s our best trait. We are never satisfied with the knowledge we have and we’re constantly pushing boundaries. We investigate and theorize and research. We invent new things and can shift the way we see the world.

Centuries ago, we thought the sun rotated around the earth. We were wrong. Science proved it and we accepted it as fact. From then on, the earth rotated around the sun. Nothing changed except our perspective. Besides curiosity, our best qualities as humans are the abilities to adapt and to admit when we are wrong.

So, do I think that Neptune, the sea god, is out there somewhere with his trident, chariot and bowling ball (or whatever that is he’s holding)?

Not very likely. If man had adapted to live undersea, he wouldn’t look very much like the rest of us. Besides, horses can’t live underwater, unless they’re sea horses, but land horses and sea horses aren’t related at all.

But, do I think it’s possible that there are potentially hundreds of new, exciting, unknown species out there that don’t necessarily resemble a Singleton Copley painting?