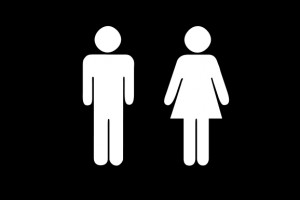 We have two bathrooms at work as is fitting and proper. One for ladies and one for gents. I’m all too familiar with the women’s bathroom. It looks something like this:

The women’s room has two stalls with a toilet each, a sink and a door that was stupidly designed to open inward so it barely clears the stalls. Fortunately, the stall doors are designed to open inward, where they barely clear the toilet, otherwise, there would be no end of door fisticuffs. It’s a pokey little bathroom that really isn’t big enough for two stalls, especially with all the doors opening inward.

I’m not sure how it is with the rest of you, but I work for a small company. There are very few females who work here; nine to be exact out of roughly forty employees. We all know each other, obviously, so we sometimes have informal meetings while we’re peeing.

Does that seem weird to anyone? It probably doesn’t seem that weird to the women out there, but the men might be cringing. Yes, we women will sit on toilets only a few feet apart peeing and talking about whatever. Women have conversations in the bathroom. It’s why we sometimes go to the bathroom with friends, so we can talk and pee.

Even in public bathrooms, where we don’t know anyone, especially when there’s a line, women will have conversations with other women.

Peeing, to the female gender, is not something that we are embarrassed about. Granted, we might have more difficulty with the concept of public peeing if there weren’t nice, opaque stalls in the bathroom. If we had to sit on toilets only a few feet apart and look each other in the eye while carrying on a conversation and peeing, it might be different. It’s the privacy that makes it perfectly acceptable.

Also, the business of number two is a private affair. No one talks to you if it’s fairly obvious that that’s what you’re doing. This privacy business makes me wonder about the concept of urinals. Why do women get privacy and men don’t?

This scarcity of females to males at my company got me thinking about the men’s bathroom. It’s roughly the same size. At least, I am pretty sure it is based on how much room it takes up in the building, which means that thirty or so men have to share one pokey little bathroom that probably looks similar to the one above.

Because I was curious, I asked our lovely little cleaning lady, the only woman who ever sets foot inside the men’s bathroom, bless her heart, what the layout of the men’s bathroom is like. The first thing she did when I asked her was make a cringe face and wave her hand in front of her nose, es stinky. Then she said una toileta y dos urinales. One toilet and two urinals? Sí. Gracias. She looked at me strangely for even asking, but Marta is used to all sorts of weird questions from me like, ¿Cómo se dice umbrella?

Anyway, Marta told me that there is one “toileta” and two “urinales” (aah, Spanglish), but she didn’t tell me where they were. So, based on my best guess, this is probably reasonably close to how the men’s bathroom is laid out: 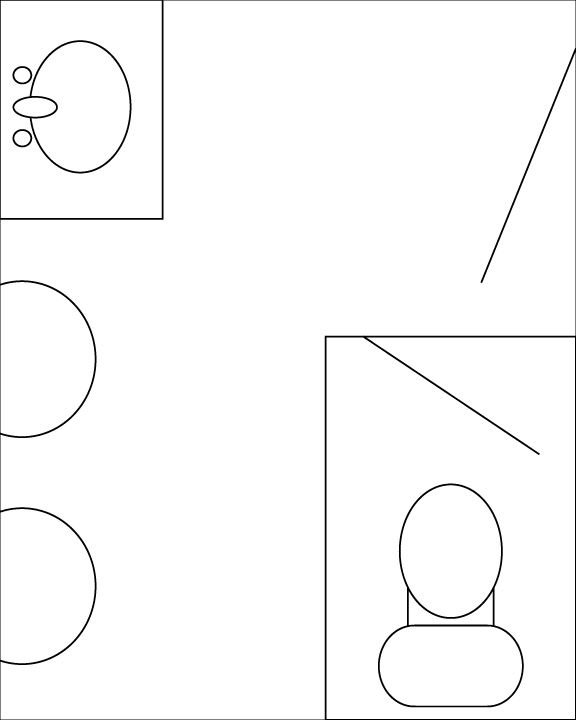 The two half circles there are highly detailed drawings of urinals. Notice how the door problem goes away and there are three places for men to pee. How nice for them.

Even if that’s not the layout to the bathroom, it still presents a difficulty; there’s little privacy. That means that thirty of my coworkers have to whip it out right next to someone who is either washing their hands or peeing themselves. No wonder guys are pee shy. Seriously, if I had to whip out my lady parts in the middle of the bathroom, I probably would be, too. Not to mention that there would be no conversation going on.

The other bathroom is always a mystery, no matter what gender you are. Women sit, talk and pee. Men stand, don’t talk and pee. Is that because of bathroom layout or just basic differences in anatomy? Do men actually carry on conversations in the bathroom and this whole silent men’s room thing is just a stereotype?

What do you think? What’s your take on bathroom etiquette? I’m curious if it’s the same in other countries.