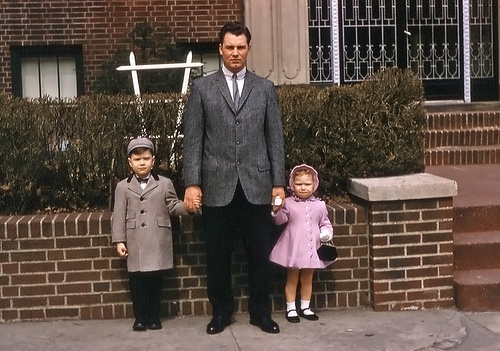 Jack inspects every single detail of the photograph. He knows how many steps there were, what the front gate looked like, what they were wearing and even the cracks in the sidewalk. He doesn’t want to admit to himself that he is trying to burn it into his memory.

He doesn’t like thinking of a time when he still gripped his father’s hand like it meant something. As if that hand was ever capable of anything good, as if it ever could have supported a family. When she gave him the picture at the funeral, Jane told him it must have been taken on her birthday because she was wearing the new pink coat they had gotten her, but Jack knows the truth. He knows that picture was taken the day before their father went to prison for the last time. Dressed up in their Sunday best, pretending to be a real family, the picture was taken by their mother on the last day they spent as a family ever. He remembers everything about taking the picture except how he felt at the time. He didn’t bother telling Jane the truth. It’s better to think it was her birthday.

After that day, things were never the same. Dad went away to prison where he got shanked in the gut for being the rat that he was. After he died, Mom became a drunken wreck, no good for nothing, let alone taking care of two kids. Jack became the man of the house. He looked after his mom and sister as best he could. He was only thirteen and still just a snot-nosed kid, but he managed. His father had some pretty good contacts in the underworld even after the feds busted him. His father’s customers didn’t want to work with a kid, but product had to move, no matter who moved it. He worked hard and proved himself until he was no longer thought of as John’s kid, but simply as Jack. He stepped right into his father’s life, as if John had never left. He would never have told his father, but Jack is proud of his accomplishments.

Jack can’t forgive his father for forcing him down the same path as him. Maybe if things had turned out different, Jack might have been a doctor, lawyer or football star, but he never had a choice. John had turned his son into himself. The old man must have had a good laugh over that.

Jack was just a kid. He shouldn’t have had to take over the family and the family business. He shouldn’t have been responsible for feeding, clothing and putting a roof over his mother and sister’s heads. He was though, because dad was a damn failure. Jack was forced into adulthood before he knew what hit him. He will never forgive his father for that. He’ll never forgive his father for ruining his mother and putting his sister’s life in his hands. Jack promised himself he’d never end up like his father. He never had kids because he didn’t want his kid to end up like him. Jack held a grudge even after the old man died. He still holds that grudge now even with mom underground and Jane all grown up with kids of her own to look after.

Jack sees himself symbolically leaning away from his father in the picture, but really, it’s just that the street is sloping. What infuriates him most about the picture is the look on his small face. Jane’s face was grumpy, as if she was just about to break into tears or had just gotten over a crying fit, probably both. But, his face is different. In his young face, there is composure. Even in the way he’s standing straight with his feet together, Jack sees calm acceptance and obedience. He sees the lingering hope that this little boy self still clung to as he held his father’s hand. It pisses him off.

He wants to go back in time to when that picture was taken and knock his father hard across the jaw. Then he would pick up his little self and his sister’s little self and carry them away from there forever without looking back. He wants to protect them and tell them what they should do next, because it sure as shit has nothing to do with his parents. He wants to take care of them as the adult he is now, not as the kid he was then. Even though Jack doesn’t see it, he still wears that look of calm composure and detachment even now.

Jack doesn’t like to be reminded of a time when he didn’t hate his parents. He doesn’t like to think there was a life before this one. He wants to think of himself as always being the hardened tough guy they forced him to be. He’s been staring at that damn picture for the last hour, trying to remember what that little boy felt at that exact moment. He can only superimpose what his adult self feels, knowing what he knows, but the little boy doesn’t know any of that yet. He doesn’t know his life is about to change forever. No matter how Jack tries to know him, the little boy remains a mystery. Jack the adult is incapable of identifying with Jack the boy. His adult self can only feel pity and an overwhelming sense of loss for the boy that he once was. From deep within, without him even realizing or acknowledging it, he feels an urgent need to grab hold of that big hand and never let it go.

He raises his glass of whiskey to his young self in a motion of cheers and drains in. He is about to chuck the picture into the fire, but at the last moment, he changes his mind. He tucks it into his breast pocket. Sometimes, it’s good to have a reminder of how far you’ve come.