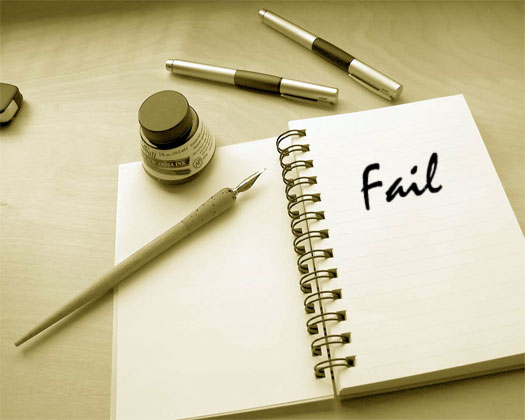 It’s time that I admit it. I am a failure. I’m a big ol’ fat blob of lazy. I can’t even write daily blog posts anymore, let alone anything of substance. Phew, it feels good to get that off of my chest.

The problem with me is… well, there are many problems. First, I’m not really a writer. I’ve never taken a writing class. I really have no idea what I’m doing. I don’t know how to structure fiction. I have no idea how to write a denouement. I have nothing published, unless you count this silly little blog. I haven’t even tried to have anything published. I don’t have an editor or an agent. I’m technically no more a writer than I am an artist.

Then again, what constitutes being a writer or an author? Did Dostoevsky fancy himself a writer? I mean before he had written Crime and Punishment, before he had been published, before he had a book, was he a writer? Which came first – the author or the book? I suppose it doesn’t matter anyway. I write, therefore I am. Regardless of whether I am considered a writer, by myself or by anyone else, I write.

The second problem, which goes far deeper than semantics, is a problem of motivation. Essentially, I am lazy. A writer in motion stays in motion; a writer at rest stays at rest. I’ve been resting for a while. Given the choice to do or not do, I will usually choose not do. When I was unemployed, I was lazy too, but I forced myself to write. I wrote every damn day. A lot of it sucked, but some of it was good. I started four books when I was unemployed. FOUR BOOKS. I wrote nine chapters on one. Nine entire chapters. I wrote five chapters on another. I wrote 6,754 words on the third. I completely fleshed out the plots and characters, everything I’d need to write it, for another, and started the first chapter. On top of that, I worked on another book I started 10 years ago and still managed to write on this blog nearly every single day.

So, maybe I’m not lazy. Maybe I just don’t have the time anymore to write like I used to. Granted, when I was unemployed, writing was the only thing that kept me sane. It gave me something to do with myself, a reason to get out of bed in the morning. Still, no matter how many writing projects I have, the only book I have finished is my autobiography. It’s the only writing project I’ve ever completed, but I haven’t gone back and revised it since. It’s far from finished.

The third problem is that I’m shy. I don’t promote anything. I write anonymously on here. Hardly anyone knows who I really am. The people that know who I am in person and know that I have a blog are very small in number.  As I wrote about in the post Anonymous Compliments, I need that anonymity to really share. I’ve always had a difficult time taking compliments on my creative output. I second guess myself all the time. That’s why I hide behind the fish, but that’s not going to get me all that far. If I really want to be a writer, people need to read what I’ve written. What good are words if no one reads them?

This thing I’ve just written has no significance for anyone, possibly not even me, but I’m going to post it anyway, because words are words and a writer cannot be a writer without them.