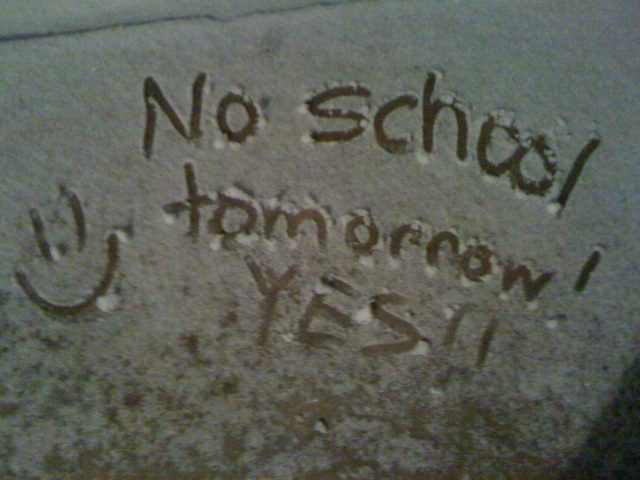 How do you stay entertained when you are snowed in?

I live in southern California where snow days don’t even exist. I know people who have never experienced a real snowstorm and wouldn’t have the foggiest idea what a snow day is. If Los Angeles ever has a snow day, we’ve all got bigger problems than just snow.

That being said, I grew up in Michigan, so I’m quite familiar with the concept. When I was a kid, snow days were the best of all possible days. I remember gathering around the radio in the kitchen first thing in the morning to find out whether my school was on the list of school closings that they read aloud. When I was in public school, where they had things like buses, my school was usually listed. When I attended Catholic school, where they expected you to get there yourself anyway, we usually had to go. Apparently, the nuns at my Catholic school figured that you should be able to make it to school regardless of the weather conditions. If they didn’t live on-site, they probably would have had a different point of view.

When my school’s name was read aloud, I’d do a celebratory dance, run into the hall, wriggle into my full-body snow suit, which was much like those hazardous materials suits that the CDC wear only better insulated, and out I went to play all day. The worst snow day we ever had, we got about six feet of snow overnight. It was the good stuff, perfect for packing, not that slushy wet stuff that doesn’t stick together. My sister and I made an igloo in the front yard and a tunnel to get there from the front door, which was covered all the way up in snow. When you opened the front door, it was just a wall of white. The tunnel system to our igloo lasted for a week or two before it finally collapsed. We had sleeping bags, a radio and a lantern out there by the end.

The first year I moved to Boston, we had record snowfall. Like an idiot, I moved there in November, the beginning of winter. We had so much snow it was ridiculous. There was blizzard after blizzard and the city was impassable more often than not it seemed. Snow days as an adult were a lot less fun than when I was a kid, mostly because I no longer had a full-body snowsuit and an impulse to go outside and make igloos, yet they were no less enticing.

I once spent almost an entire snow day just trying to dig out my car from under a mountain of snow. It took me roughly five hours. Digging your car out isn’t fun. Boston has an unspoken rule though. Parking is very much at a premium and most streets are very narrow. Streets that barely pass for two lanes when there is no snow, sometimes turn into one-way streets. If you spend five hours digging out your car from a parking spot, that spot is yours until the snow goes away. You can take a busted up chair or a parking cone if you want to get fancy about it, stick it in that spot, and when you come home, the spot will still be there. If it isn’t, you are well within your rights to key the entire side of the interloping vehicle or break the windshield. Because of this threat of vehicular violence, hardly anyone takes a parking spot that’s marked off with something. I thought it was very strange that a broken chair would save my parking spot until I tried it. It worked. However, this strange, spot-saving practice only applies to vast quantities of snow. If you try putting that chair out there when there is no snow, you’ll come home to find the chair in a tree or crushed under the wheels of an SUV that stole your spot and there is nothing you can do about it.

In some ways, I miss snow days. In some ways, I miss snow. There’s nothing like that crisp chill in the air or the sound of fresh snow crunching under your feet. There’s really nothing prettier than a fresh blanket of snow covering a city, hiding all the dirt and grime underneath. There’s nothing quite like knowing that you have a day’s respite to stay inside snuggled up under a blanket to do nothing but read a book or watch old movies on television (or dig your car out).