If you could reverse one law, which would it be?

“Excuse me, Goldfish, your politics are showing.” Embarrassed, she tucked them back inside her pants where they belong, “Thanks.”

I’d abolish the law of gravity. Oh, well, that would be a mess, wouldn’t it? Houses and people flying everywhere… people can’t even drive as it is with the laws of physics in place. I can only imagine how that would be compounded without gravity. OK, never mind that one. The laws of physics are all pretty sound, mostly because science rules. It brought us out of the Dark Ages where we were afraid of ghosts and didn’t take showers. So, that leaves the laws of man. Ugh, the laws of man…

Where to start? Man has done some pretty stupid things to itself. For instance, I heard that the only thing you’re legally allowed to throw out the window of a moving vehicle in California is chicken feathers. I don’t know how true that is today and I’m too lazy to research it, but it was most likely true at some point.

Something that never should have been a law to begin with was this whole Proposition 8 folderol in California that abolished gay marriage. Personally, I think all consenting adults who are insane enough to want to get married should be allowed to do so. However, Prop 8 was ruled as unconstitutional discrimination earlier this month so that leaves that out. Although, the battle is not over and it will most likely be taken all the way to The Supreme Court where they will rightfully uphold that ruling by a California judge (fingers crossed), let’s pick something that isn’t so ridiculously unconstitutional and discriminatory that it shouldn’t even be an issue in the first place.

I’m really not a fan of George W. Bush’s Faith-Based Initiatives either. That’s the executive initiative where W. decided to give our tax dollars to churches. However, since it’s funded by the Presidential discretionary fund, even though it’s still our tax dollars, The Supreme Court upheld it. According to that logic, if you’re President of the United States, you could hire hit men to kill anyone you choose with your discretionary fund and The Supreme Court can’t touch you. Unconstitutional or not, you could start your own war or decide to kill all babies born on Tuesday with taxpayer dollars, and there’s nothing we can do about it. But, Faith-Based Initiatives is not a law per se. If it was, it would be easier to fight it. Anyway, because it’s not a law, that doesn’t count either.

So, that leaves Wall Street. President Bush Sr. started chipping away at financial regulations, and Presidents Clinton and Bush Jr. carried on with his madness. By 1999, when the Glass-Steagall Act of 1933 was repealed, almost all federal regulations of the financial markets were gone. Provisions that prohibited a bank holding company from owning other financial companies were repealed by the Gramm-Leach-Bliley Act on November 12, 1999. The repeal of the Glass-Steagall Act effectively removed the separation that previously existed between Wall Street investment banks and depository banks. Like a house of cards, deregulation exacerbated the damage caused by the collapse of the sub-prime mortgage market that led to this latest financial crisis.

Removing federal regulation of financial markets effectively meant that Wall Street was the Wild West again. It was a free for all for greedy assholes. Less than a decade later, we have this mess we’re in now. Millions of people are unemployed, including me, countless people lost their homes, countries across the world had their economies collapse overnight and we’re still digging ourselves out of the hole that deregulation dug for us. So, I’d go back to the first Bush administration and cement federal financial regulation. I’d etch the Glass-Steagall Act of 1933 into stone. I’d shove deregulation where the sun don’t shine. 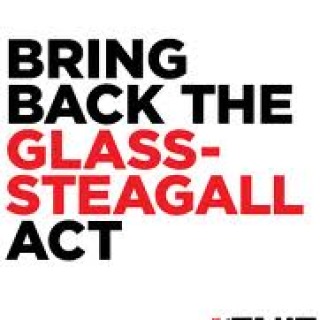