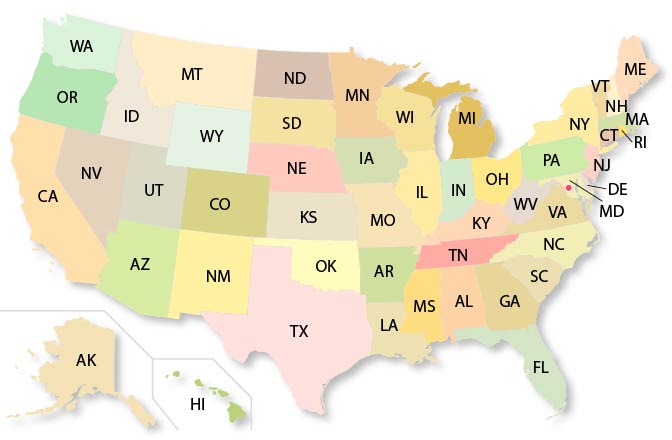 I’ve been calling the region circled on the map below the middle east, because it is about as far east as you can go in the United States horizontally, while vertically, it’s in the middle between Maine and Florida. That’s where I was last week. 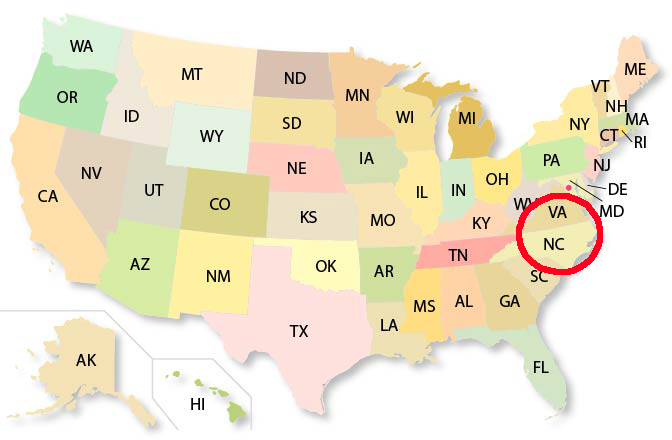 I don’t actually know what that area is called. If you live there, what’s it called? The eastern middle south? Actually, now that I think about it, I think it’s called the Mid-Atlantic. Is that right? In any event, I’ll probably still end up calling it the middle east.

My sister and I flew from Los Angeles into Detroit and we drove around for a week with our mom. This is very roughly the driving route we took from Detroit:

So, before we delve too deeply into my reviews, I’d just like to say that these are my impressions based on only a cursory investigation of one day or less. Please don’t be offended if I didn’t give a glowing review of your city or town as these are just my relatively uninformed opinions.

To anyone who’s never been to the middle east of the US, I highly recommend that you go since the whole area is breathtakingly beautiful and all the people I encountered there were so very nice.

Our first destination was Richmond, Virginia, which is about a 9 hour drive from Detroit. We were being overly optimistic that we might make it there the first night. That didn’t happen. Instead, we stayed in Lexington, Virginia, which I have to say is an adorable small town with a huge military academy and a nice hotel with an excellent indoor pool. Relaxing in the pool after a long day of traveling is definitely the way to go. I actually slept pretty well that night until my mom, an early riser anyway, in an attempt at “trying to be quiet” (yeah right), woke us up around 6 am EST, which was 3 in the morning my time.

Repeat that for an entire week. Usually when I stay at a hotel, I’m scrambling to make it to the crappy continental breakfast before it ends. As an aside, what does a “continental breakfast” even mean? Unless on a ship or plane, most breakfasts are served on a continent. I guess “continental” means barely passable as breakfast. Every morning, I had part of a muffin that ran the gamut from slimy to dry, a single serving yogurt, and a huge cup of free coffee.

Anyway, I had no such trouble waking up in time for breakfast while staying with my mom, who accidentally dropped something loud every morning around 3 am my time.

After breakfast, we made it to Richmond. We drove around to get a feel for the city and my thoughts were as follows: I like. I could live there. Richmond, while being a reasonably sized city, still has a smallish town vibe to it. Downtown, while not teeming with life, was vibrant enough. There weren’t a lot of vacant buildings or shops and there were people walking around.

After exploring downtown, we investigated some neighborhoods where I had previously found houses I liked in our price range online. Some Richmond neighborhoods are just gorgeous, yet still affordable. For example, this 3,500 square foot, 5 bedroom number for only $639K:

That same house in LA would easily fetch 2+ million depending on where it was located. Richmond is affordable, seemingly economically vibrant, and just gorgeous with a river running through the middle of it and so many trees! Love.

We were off to a good start. Our next destination was the research triangle of North Carolina, which is a huge metro area that encompasses the cities of Raleigh, Durham, and the smaller cities of Wake Forest, Chapel Hill, Cary, and a few others.

We did drive through Wake Forest, but since I hadn’t found many houses I liked in that area, we opted to spend more time in Raleigh, which is where we stayed for the night. Most of the houses I found were in North Raleigh, so after checking out downtown, we mainly concentrated our search there.

North Raleigh is a huge area with a lot of very expensive houses, but there are many houses in our price range too, like this this enormous 4,320 square foot, 5 bedroom house for $790K:

In LA, that would easily be $2M anywhere. So, Raleigh definitely makes the cut. Particularly North Raleigh, which is just full of trees. The thing I don’t understand about Raleigh is their housing market pricing. On the same street, you can find one house for $600K and another for over a million. From the outside, they don’t seem all that dissimilar. I need to do more research.

When looking online for houses with no practical knowledge of the area, I looked at houses all over the research triangle. It’s only when you’re on the ground that you realize, while they may share an airport, these cities and towns are night and day from each other.

About a half hour from Raleigh, Durham has an entirely different feel; one I didn’t personally care for all that much. I can’t even put into words what it was that I didn’t particularly like about Durham; it was just a vibe I guess.

Driving around Durham neighborhoods is strange. There are what amounts to million dollar houses just down the street from apartment hovels that are barely holding together and haven’t been painted since 1962. There seemed to be no rhyme nor reason to these neighborhoods.

Also in or near the research triangle, we explored Chapel Hill, which while nice, we decided was too small and too college town; Cary and Apex, which had too much new construction for my liking (they cut down the trees with new construction), and a few other places that we decided were a no.

As I write this not even a week later, I’m having a difficult time even remembering what the city looks like and where we went while we were there. That’s not to say that I disliked Greensboro, but it was middle of the pack. At this point in our trip, I placed it ahead of Chapel Hill and Durham, but that was hardly a glowing recommendation.

Our next stop might have been Winston-Salem, but since we had time, we decided to go down to Charlotte and explore Winston-Salem on the way back up. On the way, we visited High Point, where a lot of high end furniture is made. We decided it was too small for us.

Charlotte straddles the border between North and South Carolina. It is, without a doubt, the biggest and most expensive city on our middle eastern list, but I did find some affordable houses online there, so since we had time, we decided to go.

When we got to the outskirts of the city, we got stuck in a traffic jam. It felt just like Los Angeles and my immediate reaction was hell, no. It didn’t get much better as we went. Charlotte has a population of about 800K compared to Los Angeles’ 3.8 million, but the traffic and congestion was about as bad. I’m moving to get away from that not to another version of it. While it’s a much prettier city than Los Angeles, it’s still a hell, no.

This was the last city on our list to investigate. So far, we had 2 yes, 2 no, and a bunch of maybes. Winston-Salem ticked all the boxes for us. Downtown had a nice vibe and even an arts disctict, and we found a few neighborhoods we totally loved that were very affordable. For example, this 4 bedroom house is $499K!

Other places we visited:

It’s nice to be back home and to have some solid relocation choices. Now I can deep dive on the middle east and maybe narrow it down some more. I just have to take a trip the the Pacific northwest to complete my list.