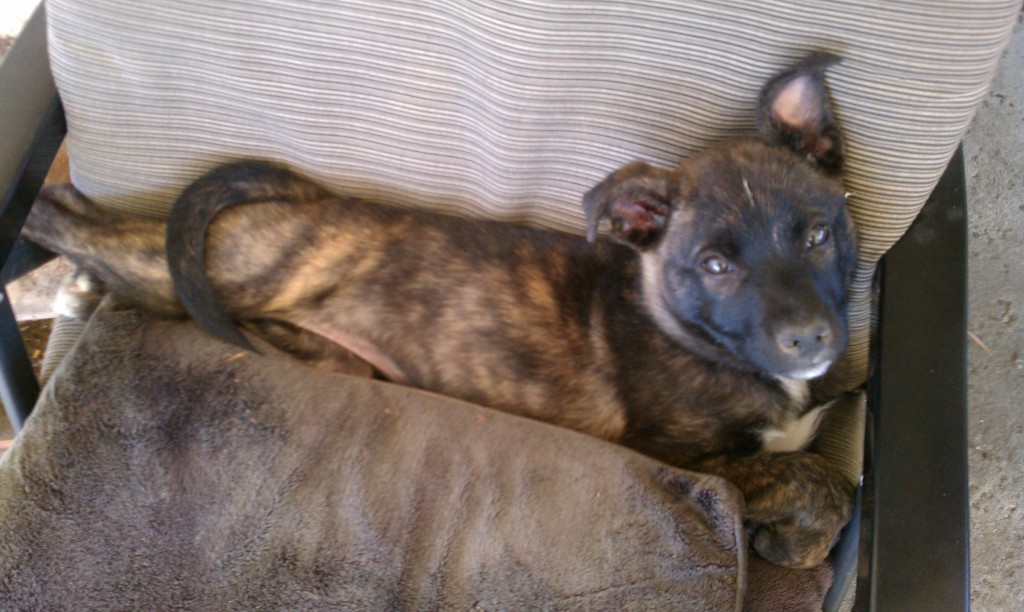 How can you be depressed with this around?

I woke up this morning thinking about the day when the two creatures I love most in the world met for the first time. Male was away when I walked into the pet store to buy cat food and confronted eight pounds of homeless cuteness. I tried to walk away from her little cage, got five feet, and turned around.

I called Male and told him I got a dog. I still remember the conversation word for word.

Me: “Well, that’s a good question. The shelter paperwork lists her as German shepherd mix, but I think she’s more pit bull…”

I picked Male up from second rehab in Malibu the next week and I took the dog with me. She was nine weeks old and melted everyone’s heart.

Male and I were both addicts. In fact, his entrance into first rehab in 2010 was around the same time I got sober. In the year or two before that, we went on many benders. We did every drug imaginable. Meth, cocaine, heroin, and all the other kinder drugs.

We even did crack. I was a crackhead when I was eighteen years old. I lost everything because of that drug, after which I swore I would never touch it again. I didn’t for almost twenty years. Then, one night, Male and I found ourselves in my apartment searching the floor for little white flecks that might be crack that we could smoke.

I love that drug. I have tried nearly every drug and crack is, by far, my favorite. I smoked crack maybe a dozen times before I realized the total insanity of it. From then on, I just did cocaine. Somehow, in my brain, doing lines of coke off the back of the toilet at work was still better than smoking crack, so it was alright. At least I wasn’t smoking crack again, right? The addict brain can come up with all sorts of justifications, no matter how stupid they are.

Male ended up in the hospital after a drug-induced seizure one night. I wrote about that here. His mom and sister, along with his sanctimonious brother and even more sanctimonious father flew out. They had an intervention. Male was shipped off to some expensive rehab in Arizona and I quit here all on my own, just as I had done years before.

Male and I were different types of addicts. I’m an addict when I allow myself to be. When I get to feeling that I just don’t have any fucks to give about whether I’m alive or dead, I do drugs and lots of them. They are a side effect of a larger problem, namely, my problem with wanting to continue living. I’ve been a drug addict twice in my life, and both times, it was because I was suicidal.

For Male, drugs and alcohol were problems in and of themselves. Male could not stop on his own. He was an addict in the traditional sense. The kind that Alcoholic Anonymous was created for. The kind that needs to invent a whole new life for himself to be able to stop.

While I quietly did detox by myself and have never done drugs again, for Male, first rehab didn’t take. Though, it did allow him to quit heroin, so there’s that.

Still, a few months after first rehab, he was using again. I tried everything I could think of to get him to stop using, but nothing worked. It seems like he went in even deeper after I quit. I kicked down his bathroom door once, because I thought he was dead in there. I kept expecting to find him dead. It was absolutely terrible and I nearly gave up on him altogether. Had he died then, it wouldn’t have been any easier, but I would have been expecting it. Instead, he died years later, when he was sober and almost done with law school. Life’s a fucking bitch.

In 2011, Male was on his way to score more drugs when he had another seizure and ran his car into a building. No one was hurt. Because they couldn’t prove whether it was drugs or a seizure that caused the accident, he received probation along with mandatory detox for two weeks. Then he shipped off to another rehab in Malibu for two months. Coupled with the terrifying notion that he was lucky not to have killed himself or anyone else when he smashed his car into a building, the second rehab took.

The day I picked Male up from second rehab in Malibu was the first day he met my dog. It was in Malibu when two loves burrowed down into my heart: a new dog and a new Male. It was love at first sight with all of us.

From that day on, he called her “my dog,” and together, we were “my girls.” She helped both of us with sobriety and that whole, tricky wanting to live thing.

This April, Male would have been sober for five years. In June, it’ll be six years for me. This February, the puppy that I rescued will become a five year old dog who continually rescues me.