To any of you bloggers out there wondering if you should keep going, if just one person in your own little vacuum can make a difference, if your words even matter in such an enormous sea of other words: let me tell you, they do.

Maybe not today, tomorrow or next week, but someday, something you say will matter to someone. It will cause a memory to stir or finally make someone realize they are not alone. That’s why I keep going. Well, that and a pathological need to get these stupid words out of me like a splinter. They form in my brain and won’t let me rest until I yank them out with tweezers.

For over five years now, I’ve sat at a keyboard in my personal vacuum and churned out more than 1,200 posts. At least half of them are fairly useless silliness that I wrote just to have something to write.

Out of the other half, there are at least a dozen posts that I’m genuinely proud of having written. I read them every so often to remind myself that I can actually write when I put my mind to it. Those are the posts that get the least attention.

The posts that get noticed are in the other half–the fairly useless silliness half. But, you never know what will get someone’s attention, so I keep writing.

I’ve been Freshly Pressed four times. I’m not really proud of any of my Freshly Pressed posts. One was a letter to Santa Claus and another was a satirical recipe, hardly anything I’d put on a resumé.

The most read posts on this blog, the ones that still get views sometimes years after I wrote them, are Tattoo Trends That Should Stop, The Pros And Cons Of Dog Ownership, 12 Things We Did Before Technology and The Worst Products For Left-Handed People. I’m not going to link those, because you can generally always find them in my sidebar under What You’re Reading.

You get the idea: None of those posts are going to change the world. Not one of them is something I’m proud of having written. The reason I bring all this up is that, every once in a while, one of those random posts does make a difference.

Last weekend, I noticed a preponderance of owls around my home. Naturally, I took pictures and posted them for you to see. It was just a silly Saturday post about noticing that I have inadvertently collected a lot of owls. The post definitely falls into the fairly useless silliness collection.

One of the pictures had a card that Ra gave me in it. In the post, I referred to her as Rarasaur, because that is the title of her blog: 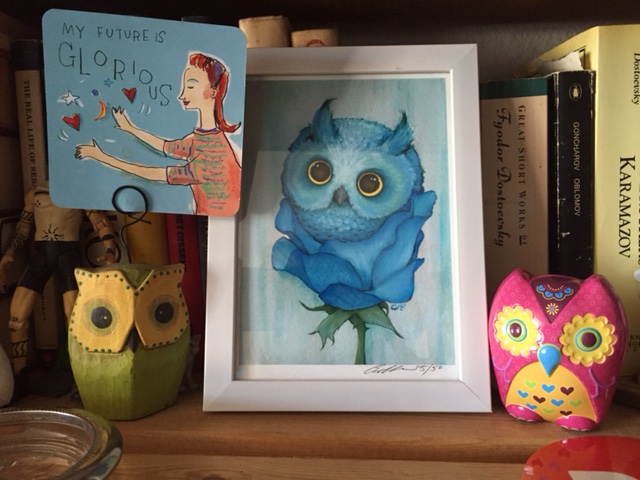 She wrote a post about all the names people call her. In the comments, she replied to someone mentioning that I called her Rarasaur and she linked my silly owl post:

I didn’t even know that comment was there until I got a pingback from a stranger.

Why would someone I don’t know link my silly owl post? My first thought was, “How embarrassing.” And then I read the post and my heart melted. It was a beautiful post by Deborah The Closet Monster about missing her mother:

I read this post about the names Ra is called. I commented on the post with my own names. Ra replied by pointing me to two examples of bloggers calling her other than “Ra.”

One was full of owls. My mom sent me many owls while I was in law school. I never did know why, but came to like owls because she sent them.

Remembering Mom’s owls thanks to that Ra-linked blog, I posted a note about them on Instagram. I said I’d be keeping her close by wearing owl earrings that evening, even if, I told my husband, I had no idea why my mom originally figured me for an owl person.

He presented a possibility so thoughtful and beautiful, I started crying.

(I’m keeping it for myself.)

Mom sent then to you because she said the owl represented wisdom… And she always thought you were the wisest and that the owl would look over you, and help guide your way.

In a roundabout way, as only the internet is capable of producing, my silly owl post had somehow made a stranger connect with her mother.

Her post came full circle, since I am missing the love of my life who died four months ago and I’m in need of fragile connections to keep him alive in my heart.

So, dear bloggers, I’m telling you to keep going, keep writing, because even if you think your posts are silly, even if you’re writing in a vacuum, maybe someday, if you’re very lucky, someone will read something from the fairly useless silliness collection and it just might make a difference to them. That is, after all, what this blogging thing is all about. You never know what will get someone’s attention.