I’ve decided since I haven’t drawn something for you in a while, and since I only have a lion and a tiger in my big kitty cat arsenal…

I need to draw another big cat. Unfortunately, the only really distinctive big cats are lions and tigers. And, well, panthers and cougars. There are a lot of big cats, and it turns out, most of them look very similar. Not to mention that there a million different kinds of leopard alone:

So, in the interest of not drawing this pattern a thousand times (which I have to say, it’s a little intimidating), I’m going to draw one spotted cat, which can double as a leopard…

…and whatever other spotted big cats lurk out there. Is it just me, or do jaguars and leopards look nearly identical anyway?

Now, you may be saying to yourself, “Fish, there’s a huge difference between a cheetah and a leopard! Cheetah’s have tiny heads and long legs, for example.”

While that is true, dear reader, once I cartoonify the above, you won’t really be able to tell. Besides, like I said, I don’t relish the task of drawing that spotted coat more than once.

Anyway, on to our Leocheegaur, or as I shall now call it, the big spotty cat. I’ll be drawing in Adobe Illustrator with my trusty Wacom tablet.

Normally, when drawing, I steal certain elements from myself, like I did the other day when I drew the chimp.

Chimp’s ears, nose and little furry topknot were stolen from his cousin, monkey. The rest of chimp was drawn from scratch though.

I’m not ruling out thieving from myself, but since big cats look so similar anyway, I think it’s best to take a stab at drawing this guy from scratch.

I always start with the biggest part of the animal, except when I don’t. This time, I started with the hind leg. Why? I don’t know.

Now for some toes. I just drew a toe-like shape and copied it twice more.

We have hind leg. Now, I’m going to draw the body, which I should have done to begin with, to see where the legs will live.

There we go. My usual deformed bean of a body, but this one has a leg attached. Now I can add more legs, because I know where they belong.

Two legs and a vaguely Tauntaun shape emerges. And then there were four…

I’m making this look easier than it was. I moved the legs around a lot until I got the right pose and I still might fiddle with the digits.

Now, for arguably the hardest part: the head. This is the second or third version of a head that I did (and no, you don’t get to see my failures).

I don’t know why I keep doing these 3/4 profiles. They are the hardest head to draw (as opposed to full profile or straight on–think mug shots). Admittedly, it doesn’t look like much, but you have to have imagination.

Anyway, we have a head. Let’s put it on the body and see how it looks.

Pretty good. I think It’ll work. Now to integrate it with the body, rather than just having it sit on a truncated neck.

There, ye of little faith. I extended the neck and hid the lines. Better, no?

Alright, all he needs is a tail and we can start the awful process of giving him his spots.

Good enough. OK, so leopard print. Eek. This is vaguely what it looks like.

This is where drawing with physical materials like pencil and paper totally wins over digital drawing, since it would be so much easier. But, since I’m drawing in Illustrator today, there ain’t no way I’m drawing a thousand little splotchy things by hand. Illustrator is excellent for precise, but not so good with splotchy.

Since I’m not going for 100% realistic accuracy, I’m just going to draw a simple, vaguely leopard printy pattern and hope for the best.

I am, however, totally going to steal those colors. I’ve copied that leopard print image into my Leocheegaur file, selected the appropriate body parts, and eye-droppered the base color.

Remember, this is basically what we’re going for here:

I tried at least three different types of leopard print, but none of them looked as good as just plain old dots. Pardon me while I copy/paste thousands of polka dots.

I drew a ton of them and put them in a layer called head spots. Then I copy/pasted the head spots onto his leg for leg spots. I see no point in reinventing the wheel.

The reason I’m being so organized about this is that once all the spots are in, they will make up about 99% of the file. I’d rather keep them grouped so I don’t have a ton of layers of black spots.

Later… Well, I tried to stay organized and failed. This is what my file looks like now:

That’s precisely what I was trying to avoid–a thousand layers of little black dots. I told you this would happen.

This is a pain in the butt. Here’s what our guy looks like with all those dots in process: 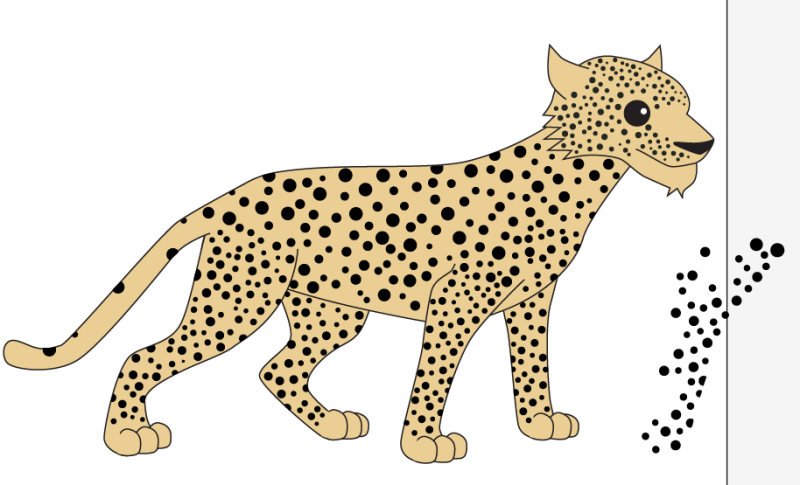 My leopard and jaguar are looking decidedly more cheetah by the minute. Not quite done yet. I still need to do the tail and finish the shading. This is taking forever.

Alright, after several hours of futzing, we have a finished product. I toned down the color of the spots to better camouflage the fact that it’s just a bunch of circles. Also, I grouped them all. They’re only on two layers now, which made changing colors a snap.

That’s as finished as it’s going to be at the moment since I am sick to death of dots. Put it on a background and upload it to Redbubble, where you can buy your own and I’m calling it a day.

Well, that took way longer than expected and ate up almost a whole day. Considering I don’t have much real work to do at the moment, that’s a win.