Based on my series 10 Bands You’ve Probably Never Heard, I’m sure it’s fairly obvious that I’m not a big fan of pop music. I never listen to music on the radio, and I couldn’t care less about Katy Perry or Rihanna’s latest. Yawn.

I have Kanye West’s latest album from 2013, Yeezus. I’ve tried listening to it more than once and it’s absolutely awful. Black Skinhead is the only almost listenable song (I can almost listen to the whole thing before skipping it). The whole album is so auto-tuned that I’m not even sure that Kanye West is a real person and not a robot. 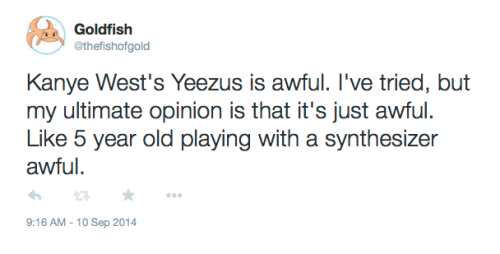 I also have Nas’ penultimate effort, Life Is Good, which for some reason, brings all the background noise to the front and drowns his voice entirely. Who did the mixing on this? It’s terrible. Why are the violins louder than his voice?

I have the latest Daft Punk, too, which swept the Grammy Awards in 2013. I admit that Get Lucky is a catchy song, but it’s also predictable and a far cry from the sound that made Daft Punk famous in the first place.

I bring forth these examples to prove that I do, in fact, try to listen to popular music; I just find it boring and so auto-tuned as to be unrecognizable as a human voice.

I didn’t watch the Grammy Awards last night, but I heard about them this morning. It seems that they were swept by Sam Smith. His song, Stay With Me, that raked in all that Grammy bling, including Song of the Year, was partially stolen. Sam Smith acknowledged it when he agreed to pay royalties:

The settlement reportedly included a 12.5% writing credit to both Tom Petty and Jeff Lynne (ELO). The song’s credit on the American Society of Composers, Authors, and Publishers (ASCAP) now lists Smith, Petty, Lynne, and Jimmy Napes as the chief songwriters.

Smith said, “I am 22 and I’ve never heard the song.” He’s never heard a multi-platinum song that has never stopped getting radio play, has been covered 20 times by everyone from Pearl Jam to Johnny Cash, and used in everything from presidential campaigns to sports arenas in the more than 22 years it’s been around.

The Grammy for Song of The Year was awarded to Jimmy Napes, William Phillips and Sam Smith, with no mention of Lynne or Petty, either by Sam Smith or the Recording Academy.

According to the Wall Street Journal, Bill Freimuth, the Recording Academy’s senior vice president of awards, said this before the show:

Since Lynne and Petty did not do any new writing for this work, we are considering their original work to have been interpolated. Lynne and Petty will not be considered nominees nor will they be considered GRAMMY recipients, should the song win. Rather, they would be given certificates to honor their participation in the work, just as any other writers of sampled or interpolated work.

This is hardly the first time that a major American awards show has congratulated plagiarism.

If you’re familiar with this blog, at this point, you’re probably going to want to roll your eyes, since I’m going to talk about my favorite example of awarding thievery, The Departed.

I watched that movie in 2006 not long after it was released. As I was watching, I had a strange sense of déjà vu that I had seen it before. It took about 30 minutes into its tedious 151 minute run-time to realize that The Departed was, in actuality, one of my favorite Hong Kong movies, Infernal Affairs.

Infernal Affairs has a better cast, it’s shorter (by 50 longass minutes) and best of all, it’s original. I’ll take Andy Lau or Tony Chiu Wai Leung any day over Leonardo DiCraprio. Most of you probably have no idea who they are even though they’re hugely successful Hong Kong movie stars.

The Departed‘s writer William Monahan contributed 50 unnecessary minutes which dragged things out by adding lots more ‘splaining, because Muricans are dumb and couldn’t possibly follow a plot unless we’re spoon fed. There was little mention of the movie’s real writers, Alan Mak and Felix Chong, who by the way, won a ton of Asian awards for their original writing, but none in America.

Go watch Infernal Affairs and tell me it’s not a better movie. I’ll disagree every time. To be fair though, perhaps had I not known what was going to happen in The Departed–a supposedly new movie when I watched it–before it happened, I might not hate it so much. It was the last Scorsese movie I ever watched.

End of The Departed rant.

It seems the American public doesn’t care about creativity or originality. Most people don’t even know that a lot of their beloved pop idols’ songs–starting with Britney Spears’ …Baby One More Time all the way to Taylor Swift’s Shake It Off–were actually written by a 43-year-old Swedish dude. Max Martin has written more number-one hits than anyone besides Lennon and McCartney, plus, 58 top ten hits in the United Kingdom and 51 in the United States, yet no one knows who he is.

A middle-aged man wrote Katy Perry’s I Kissed A Girl and no one cares.

So, y’all go on with your popular stuff. Buy yet another pale, unoriginal imitation. I’ll keep listening to bands who write their own songs and watch movies you’ll probably never see until they’re remade into Murican English for no goddamn reason. Just keep on leaving Tom Petty and me out of your celebrations of theft and unoriginality.