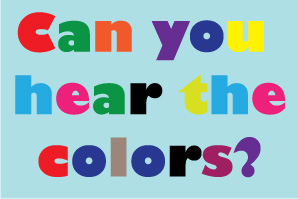 Welcome to week 3 of my weird friend Mental Mama’s challenge 7 Weeks Of Weird. Somehow, last week, I swapped week two’s question for week three’s, so this week, I’m answering the question I should have answered last week instead. After these messages, we will return to our regularly scheduled programming.

Weirdest thing about you that other people don’t usually know.

I have synesthesia, an involuntary, neurological phenomena where any of your five senses work in collaboration, for instance, tasting words or seeing letters and numbers as colors. I have narrow band sound to visual synesthesia, or chromesthesia, which means that I see music as colors, pattern and movement. I’ve talked about my synesthesia before, but it was years ago.

It’s said that artist Wassily Kandinsky had synesthesia and painted what he saw. Based only on my own, I would say that he was a synesthete like me. Coincidentally, he’s one of my favorite artists and was so even before I knew that he might have synesthesia. If you flipped this painting upside-down so the dark colors are on the bottom, you can see the synesthesia in it. At least, I can.

The most common kind of synesthesia is seeing letters and numbers as different colors. My sister has that kind. Chromesthesia is fairly common, but most chromesthetes only see notes as color. They don’t see patterns, movement and color in three-dimensional space like me. They’ll see G flat as yellow and F as green, and when you combine those two, you get blue. Actually, I’m not sure if it works that way, since that’s not how mine works. I can only really speak to my synesthesia.

I just spent an hour online looking for videos that are similar to what I see and came up empty. I did find a couple of examples that have some things right though.

The movement, with its swirls and effects, is pretty accurate, however, each separate instrument creates its own pattern, color and movement as part of the whole and these animations are entirely missing the 3D effect. What I see isn’t like watching something on television. It’s more like watching something on a stage where some items on a stage are closer to you and some are father away. Not to mention that the stage itself moves. Those animations above are missing that altogether.

The next video sort of has the 3D effect about 17 seconds in, but the visuals keep changing completely and they don’t build on each other like they should. At about a minute in, the way the flute part is at the top with its own separate movement and color overlaid on the rest is pretty accurate, but it’s missing all the other parts.

The next one has the up and down movement right–higher register notes at the top, lower register notes at the bottom–but there’s only one color in it. For me, higher notes are lighter colors. Yellow, peach, white, pink are at the top, while jewel tone reds, blues, purples and greens are at the bottom. This one also fails in that all the action takes place solely in the middle, whereas in my brain, the notes are all over the place.

Some music move sideways, some moves backwards, some moves forward, and sometimes all three at once. Each instrument, melody or harmony creates its own layer with its own movement and color. Sometimes, the layers work together, sometimes they conflict.

It’s difficult to even wrap your mind around the concept of seeing music if you don’t, but trying to explain my music with its constantly changing, intricate patterns, color and movement is nearly impossible and I’ve probably done a pretty poor job of it.

Instead of trying to explain, maybe I’ll just ask, do you have any questions?