As far as I know, this is the year 2014. That’s some sixty some odd years after the 1950s, the decade where women stayed home to clean the house, have babies, and cook dinner in aprons and dresses for their hard-working husbands. Advertising went from this…

…to this, in less than a few decades: 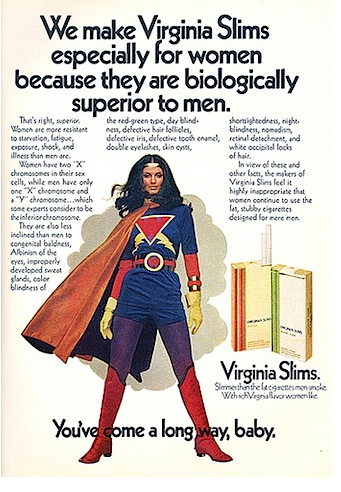 Apparently, it was all smoke and mirrors, because here we are in 2014, and the pay disparity between men and women is still going strong in America. On average, women earn roughly 77 cents for every dollar their male colleagues earn.

Some people, mostly male Republicans and federal contractors, are quick to point out that this gap can be explained by education, work experience, women taking time off to have babies and women’s predilection to low-paying jobs, because of course, women choose to work at low-paying jobs. They work harder for less without benefits, not because low-paying jobs are the only kind they can get, but because they enjoy it. Even if you factor in how much women love babies and low-paying jobs, that only accounts for about half of the pay disparity; the rest is plain old-fashioned discrimination.

Can Republicans be any more deluded? Why, yes, they can! I’ll explain how later, but first, more examples of what it’s like to be an American working woman in 2014.

This week, Former CIA Director Michael Hayden called California Democratic Senator Dianne Feinstein’s opposition to CIA interrogations “emotional.” In 2014, women’s views, even those of a long-time Senator of the United States, are still perceived as “emotional.” Feinstein, an articulate, experienced Senator, was demeaned because she is a woman. Can you imagine a CIA director summarily dismissing a male colleague’s objection by referring to it as “emotional”? No, because that wouldn’t happen.

Last month, Los Angeles released a report on women in local government. The results were rather shocking. In LA government, women earn an average of 83 cents on the man-dollar. Woo! Female Angelinos are doing better than average! That’s still only 83 cents on the dollar.

The only area in local government where there are more women than men was in administrative services. The remainder of the positions were squarely held by predominantly men. In LA, eighteen elected officials represent nearly four million people; only one of them is a woman. This report only accounts for women in government; I can only imagine how much worse the numbers are in the private sector.

This morning, President Obama signed some executive orders that will make pay disparity between genders more transparent. Government contractor employees can no longer be penalized for discussing salary and salary statistics will become available, so women can really see whether they’re being discriminated against or not. Unfortunately, this only applies to women working for government contractors, but it’s a start.

Now, we circle back to deluded Republican males who are huffing and puffing about how salary transparency puts unfair pressure on employers and that this will produce a wave of lawsuits. We can’t have that! Women suing their employers over gender discrimination? Waaaah! Think of the poor “job creators” who will have to pay women the same as men! Think of the poor, overworked legal system having to dole out justice to hundreds or thousands of women! Think of the children!

Really, Republicans? How can you possibly argue against wage equality without coming off like the misogynist jerks you seem to be? You’re honestly going to claim that the gender gap isn’t all that bad because babies? You’re going to fight salary transparency because you are worried about a rash of lady lawsuits for unfair business practices? Do you have any idea how evil, outdated and bigoted that makes you sound? Good luck with that, assholes. You’d be better off arguing in favor of kitten genocide. At least half the population of the country isn’t kittens and kittens can’t vote. I will never understand how any woman could ever vote Republican.

That said, the Democrats’ motive for a push on paycheck equality is hardly pure. They’re rather transparently promoting The Paycheck Fairness Act again in order to boost the female vote in the next election. Even the White House is not innocent of pay disparity. Female employees of the Obama White House earn about 91 cents per man-dollar–better than Los Angeles, better than average, but still less than 100%. Do we really need a Presidential proclamation of National Equal Pay Day? How about just equal pay?

This is not a made-up problem. This is a real problem with real data and it affects all of us, even those of you with penises. This impacts your coworkers, mothers, wives, daughters and friends. Do you really want to live in a world where men have more opportunities and women are worth less than men?

For every dollar a man earns for the same work, I am earning less. When I was a kid, I expected more from the future than this. I am goddamn tired of pompous men having a say over my reproductive rights and benefits, and even my salary. I am not worth less because I am a woman.

It seems that the only place where women are entirely equal to men is in the voting booth. Our vote counts just as much as any man’s. I say it’s about time that women started using this power to make a real difference before they take voting rights away from us, too.