We’ve all lost something over the last century and most of us don’t even realize it. I’m talking about craftsmanship.

When my parents got married, fifty years ago this past September, they inherited a bed, a sofa, some tables and lamps to furnish their new home. Those items are still in use.

From the time I was old enough to have a big girl bed until I moved to California just shy of fifteen years ago, I slept in my grandparents’ old bed with the hand carved walnut frame. I try not to think about how creepy it is that my grandparents made with the sexy times to create two children in the same bed that I grew up sleeping in.

I got rid of that bed, not because it was uncomfortable or lumpy or broken–it was none of the above–but because I was tired of trying to find sheets for a three-quarter bed (once a year at the JC Penney white sale) and because when I moved to California, I did so with a tiny trailer on a tiny car that had no room for furniture. I loaned my childhood/grandparents’ bed to a friend of mine in Boston and it is still in use as a guest bed. That bed, mattress and all, is probably a century old.

Since I moved to California just shy of fifteen years ago, I’ve had three beds. Three of them. They weren’t cheap beds. Well, alright, the last bed I bought was pretty cheap. I paid $500 for it on sale at Sears about five years ago, but the original price was something like $1200. I don’t know about you, but $1200 isn’t cheap to me. It’s cheap for a car, a house or a private plane, but not for a mattress.

My grandparents’ bed probably cost about the same. Accounting for inflation, they probably paid three glass beads and a loaf of bread for it. The difference is, their bed is still in use and mine was given away on Craig’s list for nothing.

My mother was gifted a KitchenAid mixer as a newlywed. She’s still using it, even though it’s a lovely dated shade of avocado green.

Over the years, my dad had to replace the plug twice, she’s bought some new stainless steel bowls for it and she recently had to replace the mixing attachment, because after fifty years of regular use, the enamel paint was starting to fleck off. That mixer pictured above is for sale on Ebay for $299. My sister just bought a new KitchenAid mixer for roughly the same price. What are the odds that hers will last until 2063?

Nearly twenty years ago, a friend of mine, who is now dead, realized that coffee was really the most important thing in my life and gave me a coffee grinder. Before that, I was purchasing ground coffee like a dolt. A few months ago, it stopped working. It made me very sad to see that it was dead, too. It sat on my counter with the cord wrapped around it for a few weeks because I couldn’t bear to part with the last usable item I had of my friend. Every morning, when I made coffee, I thought of her.

I can’t live without coffee, so I bought a new one. It lasted about a month before it stopped working, too. One month. It cost me $20 and it had no warranty. I didn’t expect a $20 coffee grinder to last twenty years, but I did expect it to last more than a month. This time, I went out and bought a KitchenAid grinder. I’ll be timing it to see how long it lasts. I don’t expect it to last until 2063.

I bought a supposedly good quality watch, because I like knowing what time it is and I don’t like having my phone on me all the damn time. I know, call me crazy. I paid $80 for this watch. The retail price was double that. I’m the type of person who wears my jewelry all the time. I don’t take it off. Admittedly, I am hard on jewelry. I wear it while using power tools, working, playing, cooking, gardening and showering. The reason I bought a good quality watch is because I am hard on jewelry. After only six months of use, this is what happened to my watch:

You’ll note that it’s no longer attached where a watch should be. Well, alright. It’s a good quality watch. It’s under warranty. Yay! All I have to do is send the watch, the receipt, a form and a $10 check for non-refundable shipping to New York. They will inspect my watch, determine what the damages are and then send me an invoice to fix it. Wait, what? What happened to the warranty? I haven’t sent them the watch yet, because honestly, I’m a little miffed about it.

Meanwhile, in my safe, I have my grandfather’s pocket watch. It’s dated 1937 and it still goddamn works. 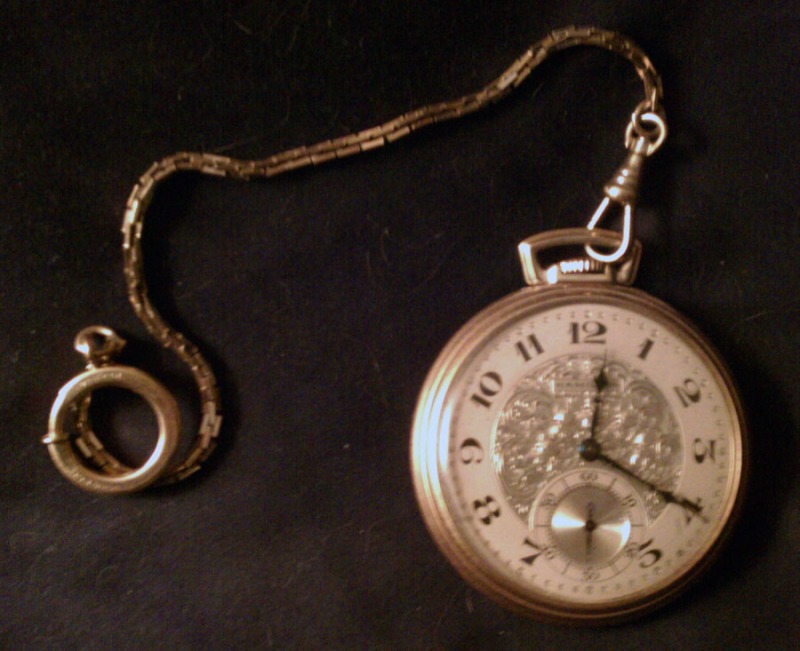 Do you see where I’m going with this? Even in my lifetime, quality of durable goods has declined.

Durable good is an economic term. It’s one of the indicators economists use to determine the health of the economy. From the wikipedia on the subject:

In economics, a durable good or a hard good is a good that does not quickly wear out, or more specifically, one that yields utility over time rather than being completely consumed in one use. Items like bricks could be considered perfectly durable goods, because they should theoretically never wear out. Highly durable goods such as refrigerators, cars, or mobile phones usually continue to be useful for three or more years of use, so durable goods are typically characterized by long periods between successive purchases.

These days, a durable good is defined as three to five years of use. My coffee grinder and watch were supposed to be durable goods, yet neither one of them lasted six months.

We’ve all lost something and most of us aren’t even aware of it. The decline in quality of durable goods happened so gradually that we think that six months for a watch and five years for a mattress is good enough. What happened? How did this shift in expectation come to be standard?

It’s not fair that I can spend comparable money on a durable good as my grandparents and have it last a fraction of the time. It’s not fair that instead of stainless steel, we get plastic. It’s not right that most of the people making these plastic parts aren’t even paid a livable wage in some sweatshop somewhere on the other side of the world.

This is not right. This should not be standard. Consumers should expect more. We should get more. I’m not sure what the solution is, but the next time my coffee grinder dies, I won’t just go out and buy a new one. I will complain to the manufacturer. I will demand that they make good on the warranty. I will expect more.