The other day, I talked about how most of my guilty pleasures are music and I mentioned J-Pop as one of them.

Then, on the Facebook, there was this exchange. I included only the salient parts that I wrote to protect the innocent. You’re welcome, Jackie. 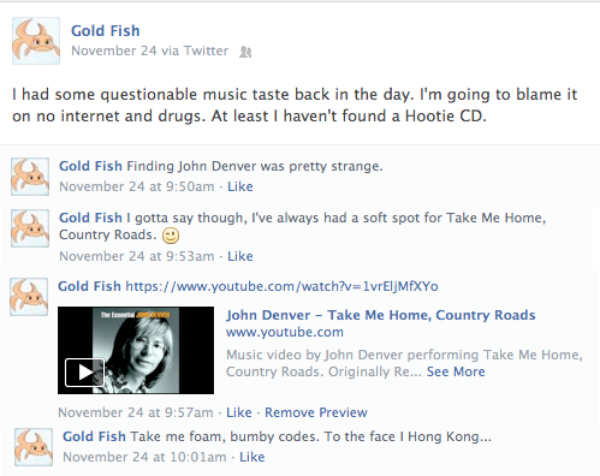 Today, I thought I’d dig up the most embarrassing songs in my music collection. Now, keep in mind that I have over 25,000 songs in my library, so of course, there are bound to be some that leave me scratching my head. We’ll start with the one we already divulged:

As I mentioned in the Facebooks, I have always had a soft spot for this song. Although, really, I love Toots & The Maytals cover more:

Because Toots & The Maytals Rock.

Bleach is a long-lived Japanese manga/anime series. They’re on episode 7.954 x 104 or something. I not only have a lot of the episodes, but the soundtrack, too. Some of it isn’t too embarrassing, like Yui…

Both songs I happen to love, but then there are songs Takacha’s Movin’…

All of which, I sing along with badly even though they’re all mostly in Japanese and I don’t speak Japanese at all. I am old enough to be all of those artist’s mother. Not embarrassing at all. Nope.

Speaking of soundtracks, I have a lot of the ones from Quentin Tarantino movies. I typically think he’s a goddamn hack director who hasn’t had an original thought in decades and has managed to skate by because Americans are stupid and don’t know when they’re spoon-fed straight-up theft, much like Martin Scorsese winning an Academy award for writing for The Departed, when The Departed already existed as an excellent Hong Kong movie called Infernal Affairs.

Anyway, Tarantino. Not really a fan. I will give him credit in one area though: he puts together excellent soundtracks. I own a bunch of them. One of them has this song on it, which I admit that I absolutely adore:

That’s a great song, even though it’s derivative as hell, just like Tarantino.

However, I am a mite embarrassed by the sheer volume of ZZ Top I have in my library. It’s a lot. You wanna know how much?

That’s a lot of ZZ Top, but I like them, especially their early bluesy stuff, but I have some of their more recent albums, too.

ZZ Top rocks. I met Billy Gibbons once at a classic car thing around the corner from my house. He was nice. Fortunately, I wasn’t wearing my ZZ shirt or that could have been awkward.

You might know this song from Smokey & The Bandit. Yup. This is a badass song and I don’t care what anyone says. Whenever this comes on random shuffle while I’m driving, I turn it up.

I also have this song:

Looks like we got us a convoy. Ain’t she a beautiful sight?

Disco versions of The Star Wars songs!!!!!! How could you not bloody love this? It makes me want to go roller skating.

How stylin’ are they? The problem is, I can never remember if The Dazz Band or The Gap Band Let It Whip or Dropped A Bomb On Me, so I have both.

I have a three disc ELO set. Why? Who knows. But, dude, I have this song:

It’s okay to be jealous.

That’s enough sharing for one day. What songs do you have hiding in your library that you’d be embarrassed for anyone to know about?