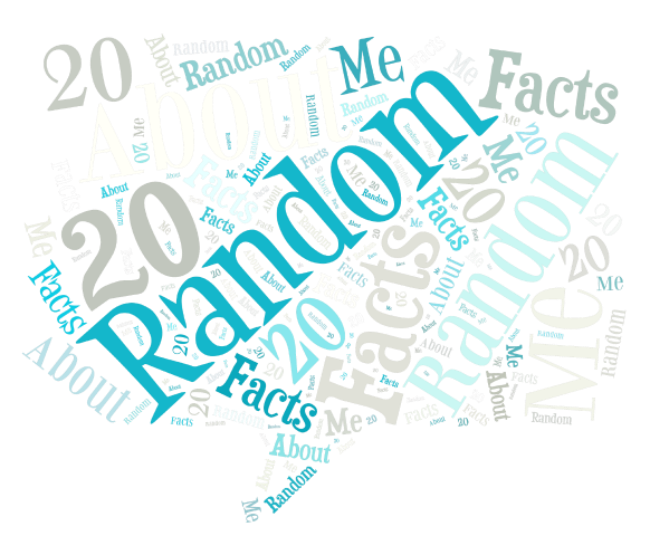 That is to say, facts about me, not facts about the swimming variety of fish. I suppose I should change the title to be clearer, but I’m pretty lazy.

1. I’m pretty lazy. I’ve been stuck in a crappy job where I am severely underpaid for a couple of years now because I’m pretty lazy. It’s more that I guess I don’t have a fire under my buttocks. I’m pretty unmotivated as a general rule. Getting a new job seems like such a bother and I’m not very good at change.

2. I’m not very good at change, but I’ve done a lot of it. I’ve lived on both coasts of the United States and in the middle. I’ve had a thousand different careers and have lived in so many apartments that I don’t begin to have enough digits to count them all. The shortest amount of time I ever lived anywhere was two weeks. And that’s not couch surfing for two weeks, but moving all of my crap in only to move it all out again two weeks later. The reason? I accidentally lived above a meth lab. Good times.

3. I am a creature of habit, but also not. My regular daily life is certainly very habitual, but every decade or so, I get bored with it all and make a huge change like moving clear across the country from one coast to another.

4. Goldfish is pretty much my only nickname and a lot of people who know me in real life don’t even call me that. I’ve never been much of a nickname sort. You know how some people never seem to be called by their given names? That’s not me. Most people call me by my real name or variations thereof.

5. I bought three books at the thrift store recently: Hamas: Politics, Charity, and Terrorism in the Service of Jihad by Matthew Levitt because I don’t know all that much about Hamas and I’ve been really drawn to non-fiction lately; A Tale Of Two Cities by Charles Dickens because I honestly can’t remember if I’ve read it or not; and Killshot by Elmore Leonard because he recently died, he’s from my hometown, Detroit, and I’ve never read any of his books.

6. I’m an insomniac. I take over the counter sleeping pills every night more for the placebo effect than anything else. My brain needs to connect point A, I have taken sleeping pills, with point B, I can sleep now. Someone could probably come into my house and replace my pills with sugar pills, and as long as I didn’t know, they’d be just as effective. They don’t always work anyway. A lot of times, I just can’t sleep no matter what.

7. I would be perfectly alright in solitary confinement as long as I could read and write. If you took away my ability to read and write and stuck me in a hole by myself, it would be a lot harder and I would probably just go insane. Although, realistically, I’m already on the road to insanity and I currently have a full range of freedom. I spend a lot of time by myself as it is.

8. There are certain words I will never ever remember out how to spell correctly no matter what: occasionally, Massachusetts (and I lived there for four years), ecstasy, gauge, Penicillin, accommodate, dénouement and anything French. I am damn terrible at French.

9. I’m hard of hearing, I’m essentially blind without glasses or contacts, and my sense of smell isn’t up to snuff, but I can taste and feel like a motherfucker.

10. Money is my biggest worry and has been most of my life. I have a lot of big expenses coming up and I have absolutely no idea how I’m going to pay for them. I have that traffic ticket due next week, I need new contacts and glasses, my teeth are falling out and my car needs new brakes. I can’t afford any one of those things, let alone all of them.

11. Large insects freak me out, especially if they can fly. June bugs, those massive bumblebees, giant cockroaches, huge centipedes… ick. Any insect bigger than a dime needs to stay away from me. There are exceptions, of course: butterflies, praying mantis, and somehow, tarantulas are fine by me.

12. I’m not afraid of the dentist, heights, spiders, snakes, needles, germs, clowns or flying. I am terrified of public speaking and very deep water. I absolutely love water as long as its shallow enough to hold my breath and touch bottom. Any deeper than that, and I panic unless I’m on a very large boat.

13. I am extremely low maintenance. Men that I have dated are completely amazed at how low maintenance I really am. I am out the door in the morning in just over a half an hour and most of that is spent walking the dog and making coffee. I don’t require gifts on Valentine’s Day. I don’t expect to be wined and dined. I am so undemanding that I’m often broken up with because of it. Boys are dumb.

17. I am honest to a fault. I sometimes blurt out things I wasn’t supposed to say. I suffer from Inappropriate Comment Syndrome. The thing about having no memory to speak of is that it keeps you honest. You can’t lie because you have no way of remembering who you told what. It keeps you honest.

18. I share my bed with three animals: my dog, cat and a stuffed bunny a friend of mine gave me some fifteen years ago. My dog, normally a huge fan of ripping stuffed animals to shreds, has never touched the bunny. Somehow, she knows that one is mine and leaves it alone.

19. When I was a kid, I used to compose songs. I carried a cassette recorder around with me and would hum my songs into it. I had tape after tape of songs I’d written. I have no idea where those tapes are now and as I got older, the compositions just stopped.

20. I would love to go skydiving, but it’s so expensive that it’s never come close to being a priority. I’ve made do with those amusement park rides where they strap you into a harness and drop you, and bungee jumping.

This is a Rara prompt. Yay!