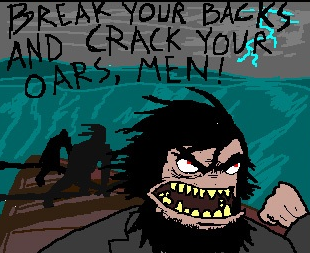 Another music post! YAY or BOOOO, depending on how you feel about music posts. I’m going with YAY. If you feel BOOOO, go read this post about tequila and red underwear.

This prompt was straight up theftified from my fellow Team Tiny Pepper member, the lovely Ms. Combat Babe.

This is a list of the most played songs on my iPod and why. Some of these songs are surprising to me as most played. However, I tend to use my iPod most while driving, so perhaps they’re not all that surprising after all.

Oh, I love Boris. They are the best Japanese band I’ve ever heard, not that I’ve heard all that many Japanese bands. This song is off of the album Pink, which in its entirely, is supremely rad. At just under two minutes long and fully instrumental, this song positively rips. I love playing it while driving. It makes me want to go really fast.

The Sword might just be the dorkiest band ever in existence. Their lyrics are ripped straight from the D&D monster manual. I love them. The Sword have four albums now and I’ve been listening to them since the first one. I don’t even remember how I found them, but I’m glad I did. This track is off their third album, Gods Of The Earth. The only thing that surprises me is that this track is the most listened of The Sword’s songs.

This one surprises me. While I absolutely adore Sleep, I wouldn’t have figured that they’d top the list. Sadly, they are now broken up, but they left us with some really awesome music. Sleep’s Holy Mountain is one of the best albums evar. They are also extremely dorky like The Sword. I guess that makes me extremely dorky, too.

Ooh, I love me some EW or as my friends and I call them Electrifizzle Wizzleteats, Erecty Fizzlewizzle, Electruhizzle Wizzledy Fizzeldy or any other variation thereof. We seem to have an unwritten contest to come up with the most outlandish, but still recognizable name for this band. I love their super heavy, fuzzed out bass. It’s the perfect complement to the singer’s higher pitch and excellent for driving.

By all accounts, Clutch is my favorite band. At least, according to last.fm, since 2007, I’ve listened to them far and away more than any other band.

I have 298 items, 1.47GB of Clutch music on my iPod alone, so, there’s really no doubt that I like them. They have 10 studio albums and I have a bunch of EPs, demos and live stuff, too. Their debut LP, Transnational Speedway League, was released in 1993 and I’ve listened to them since then. I’ve seen them live more than any other band in three different states and I’ve grown old with them. However, I am surprised that this song is the most listened track by them. I knew it probably had to be an old one since I’ve had more opportunity to listen to the old stuff, but this is off their second album in 1995. Still a great song.

I absolutely love John Garcia and want to have like a million of his babies. And by babies, I mean songs. Everything this man has a hand in turns into awesome. If you’re not familiar with Mr. Garcia, he’s been in a lot of bands. Most notably Kyuss, but also Hermano, Slo Burn and Vista Chino. My favorite of his projects, after Kyuss, is Unida. Every single song is great. Every single one. If this gives you an idea of my esteem for Unida:

I actually had to stop listening to this song while driving because it makes me drive really, really fast, so I’m surprised it’s still in the top 10. As a friend of mine once said about this song, it’s “an uber-tank of doom firing chainsaws of badassery.” I said it’s like a runaway semi-tuck on a steep mountain road with blown out tires shooting sparks on asphalt. I  think his description is better, or at least, more succinct.

Plus, their lead singer is dreamy:

Another band that is, sadly, no more. They only released three albums and this one, the self titled, is amazeballs from start to finish. Love these guys. This song makes me want to drive like the guy in this fan-made video. I probably shouldn’t listen to this song while driving either.

From the last.fm bio: “From the syringe laden shores, lush woods, and concrete caverns used as a playground for the infamous “Jersey Devil” filled with whiskey, Satan, and cheese curds, Halfway To Gone was born.”

These guys have such a southern California sound. If I had to pick one band that summed up SoCal, this would be it. I can’t picture them anywhere else. Godzilla is their cover of the Blue Oyster Cult classic. There are few covers that I enjoy as much or more than the original and this is one of them.

Fu Manchu have been around forever and all of their albums are good. If you ever get the chance to see them live, I’d recommend it.

There was a time when Mastodon, like Metallica, was totally badass and nobody could say otherwise. That was before their singer started singing like he worked at a piano bar instead of the throaty awesomeness exhibited above. Now, they are a mere shadow of what they once were. They’ve gone downhill since 2006. Weeee! When your album art is better than the music on it, that’s a problem. It’s like they got sober or something.

But, we’ll always have Leviathan, Call of the Mastodon, Remission, Lifesblood, and even Blood Mountain, which I thought was sub-par until I heard Crack The Skye and now I think it’s brilliant in comparison. Plus, their song Blood And Thunder spawned this comic, made from its lyrics, if nothing else: