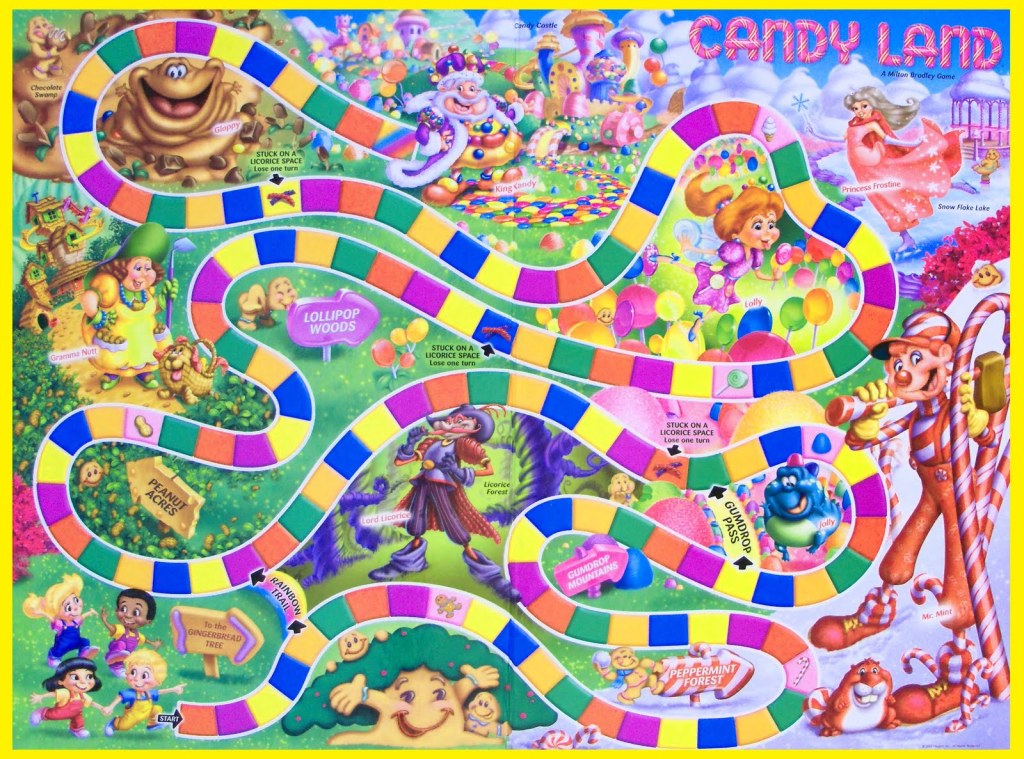 I guess I'll dress as the smiling tree who needs a hug? Image from Hasbro.com

I live next door to one of my oldest and closest friends. He’s been working in another state since before I moved in. This is fortunate for me since he’s the type to just show up in your house uninvited and put your hand in bowl of water to get you to pee while sleeping. I love him dearly, but he’s an asshole.

His long-time girlfriend has been here though. Every year, she throws a huge party for her birthday. She’s a costume designer so her parties aren’t about just sweeping the floor and putting out a bowl of chips. They are theme parties. Groan. Since she is a Hollywood costume designer, she’s got that Busby Berkeley sense of grandeur.

This year’s theme was Candyland. Candyland. What? I am vaguely aware that there was a game my sister and I played when we were kids called Candyland. How the hell does one dress for Candyland?

My take on theme parties is that I will attempt to make an effort for about 30 seconds. If nothing immediately comes to mind, I will take the lazy way out, dress like I normally do and just tell people I’m dressed as X. This year’s X was dressing all in black from head to toe and telling people I was black licorice. Wee!

As a child, I loved Halloween. I absolutely adored getting to pick what I wanted to be for Halloween that year. I still love Halloween as evidenced by the five new Halloween drawings I did this past week. The difference was that I could be anything or anyone for Halloween. The sky and my imagination was the limit! Even as a child, for the rare birthday party I was invited to, I didn’t like theme parties. Theme parties are limited to a theme. They’re too constricting. You must dress as X. Well, I don’t wanna! I wanna be Y!

As a firmly established adult, I don’t dress up for Halloween anymore. Once I hit the 30-year-old mark, I kind of stopped dressing up. It wasn’t a conscious choice; it happened more organically. I stopped feeling like it was imperative that I dress up and go out on Halloween, no matter what day it fell on. I’m officially too old for those shenanigans. Nowadays, I stay home in regular clothes and pass out candy to the children. I do still love seeing the children and their imaginations on display.

So, my friend’s girlfriend’s birthday party seems more like a yearly chore to me than fun. It goes a little something like this: Oh, right, that time of year again. What’s the theme? Candyland?! What the effin’ lovin’ holy hand grenade does that mean?! Thinking… Thinking… Thinking… Pah, black licorice it is!

However, it is not just my attendance at this shindig that is requested. I help set up. Sometime, about seven or eight years ago or so, my circular saw was needed. Yes, party prep for these soirées requires a circular saw. When I say she goes all out, I mean she goes all out.

Ever since then, I’ve helped set up. It’s usually an all day affair. Yesterday, we started at 9am and finished early at around 3pm. Most years, it’s a mad rush to finish in time before people show up. This year, I had time for a nap. Still, party prep typically leaves me exhausted, so by the time the party starts, I’m all wilted.

Hollywood costume designers tend to know lots of Hollywood costume designers and other assorted industry creatives. I’m a creative myself. As a graphic designer, I have a little in common with them, but not much. I don’t work in “the industry.” Whenever I talk to one of these Hollywood types, the inevitable “what do you do?” question pops up. I answer that I’m a graphic designer not in the industry. You can see the air deflate from their next sentence and they answer with “Oh, that sounds interesting.” Interesting to them doesn’t mean interesting. It actually means “In about 10 seconds, I’m going to make an excuse to walk away and talk to someone who has something in common with me.”

I’m not saying all Hollywood types are like this, but the ones that my friend’s girlfriend knows definitely are. They’re not friendly to outsiders. They will sit in little clumps. If you sit on the outskirts and try to assimilate with a clump, hoping that someone will notice your presence and include you, you will wait forever for that to happen because it won’t.

There are always a few other outsiders there that I end up talking to, but even that falls flat after a while and I end up sitting on the outside of several clumps trying for osmosis and inevitably failing until I decide it’s late enough to leave without insulting anyone and quietly sneak out without saying goodbye.

That’s how these parties always go. They are exhausting. They are not fun. I never meet anyone new or interesting. I’ve never made a lasting connection with anyone.

Last night around 11pm, I took my dog out for a walk, came home, took off my dress, makeup and heels, and put on my pajamas. For a long time afterward, I heard the raucous noises from next door and was content in the knowledge that I wasn’t missing a damn thing.