Somehow, my life has begun to revolve around my dog. I think it’s because I no longer have a yard that I can just throw her into and forget her for days on end.

Just kidding. I never did that. When I had a yard, I didn’t like to leave her unsupervised for too terribly long since she would certainly find something to destroy, not to mention all the hufflepuffing. Hufflepuff is what I called the blustery, groany, growly barking she did whenever someone outside of the fence did anything, which was practically all the time since I live in Los Angeles. There are always people about doing things outside of the fence.

Anyway, since I no longer have a yard, I have to put clothing and shoes on, and follow her around the neighborhood, hoping that, at some point, she will do her business and stop being distracted by squirrels, birds, cats, people and other dogs. I put her business in a little biodegradable bag as if it was a collector’s item, carrying my prize until we reach the trash bin where I stow it with the rest of my collection. I so love carrying poop around the neighborhood. It’s my thing now.

A lot of people with dogs in my neighborhood don’t seem to see the value in collecting poop. They just leave it where it lies for some other lucky collector to pick up. Silly them. That shit is one of a kind.

I’ve had to build 20 imaginary minutes into my morning schedule. I say imaginary because I never have enough time in the morning. When my alarms go off, my brain automatically computes a complicated mathematical algorithm that it is only capable of doing when I am half asleep. It factors the light in the sky with the numbers on the clock, calculates the earth’s distance from the moon, divides by Pi, and determines that we have another 27 minutes and 14 seconds to hit the snooze button. Factoring in walking the dog, that leaves 7 minutes and 14 seconds, and even that isn’t enough time.

I’ve been taking her there since she was only a few months old, but until I moved and lost the yard, it wasn’t a daily thing. It was a few times a week if we feel like it thing. Male used to go with me. I only went without him a few times. He’s even less social than I am, if you can believe it, so we didn’t interact with the rest of the people there all that much. If there were people at our usual picnic table, most of the time, he’d want to sit somewhere else. If there was nowhere to sit without people, he would read the paper or play with his phone so he wouldn’t have to do much talking.

In over two years, I didn’t really learn anyone’s name. In two months without Male, I know all the regular visitors. I have dog park Facebook friends. I have even exchanged phone numbers with some of them so we know when the other is showing up.

When my dog went up to a two-year old toddler in the big dog off-leash dog park and licked him on the face, scaring him to death, these people defended me. My dog hasn’t spent much time around toddlers. I’m not sure exactly what she thinks they are, but they are not the same as people to her. She probably thinks they’re on par with birds or cats; interesting things that move. Whenever there is a child in the dog park, I’m on guard since my dog has a tendency to scare them, not because she’s intimidating or aggressive, but because she’ll walk right up to them and lick them in the face.

The toddler in question was the same height as my dog. She walked up to him and licked him in the face. Her tongue was nearly as big as his head. He started crying. His mother, some twenty feet away, trundled over and picked him up. I walked over to make sure he was alright, more out of politeness than anything since I saw the exchange and knew he just got a lick on the face. She said that she can’t believe my dog “attacked” her child. “Look at his face!” she kept repeating. I looked at his face and saw nothing but a scared toddler with tears rolling down his cheeks. “You shouldn’t bring an aggressive dog to the dog park. My son could have been seriously hurt!” I looked at his face again and saw nothing even resembling a blemish. I spoke to the boy, not to the mother, but to the boy: “She just wanted to say hello. She didn’t mean anything by it. I’m sorry she scared you.” He stopped crying immediately. I walked away very seriously pissed off.

This woman seemed to have little concern for her child and even less knowledge of dogs. The dog park I go to is for big dogs. Little dogs are welcome if they can handle themselves and some of them very much can. There is a separate fenced in park for small and timid dogs. The big dog park is off-leash and rather large. It’s large enough that if your dog is on the other end of it, there’s no way that you could get there in time if there’s trouble. Even an Olympic sprinter would have trouble getting to the other end in less than half a minute. That is why it has an enter at your own risk sign at the entrance. Children are welcome, but it is recommended that they never stray too far from their handlers. Bringing a toddler and letting him roam around unattended is nearly akin to child abuse. In addition to the risks posed by the dogs themselves, there is the fact that every square inch of grass/dirt/mud has been peed on/pooped on/trampled by countless dogs. Toddlers, like dogs, tend to put everything in their mouths. Eww.

After I apologized to the child, I collected my dog and left. The next day, I heard that, after I left, the woman did nothing to protect her child and he was approached by several other dogs, one of whom actually knocked him over. Several people went up to her and told her that it was dangerous for her toddler to be roaming around. Since she herself had a small dog, it would be safer if she went over to the small dog park. She shouldn’t let her child play on the disgusting ground. She should take her child to a child park, not a dog park. She responded to them all in the same way she had to me: with smug reproach. One of the people there thinks she was angling for a lawsuit. She was using her child as bait. I’d like to think better of her. I like to think that instead of using her child as a money-grabbing scheme, she was just an idiot.

Last night, I spent an hour and a half filling in mud holes. There are sprinklers at the dog park even though a lot of the acreage is just dirt. These sprinklers go off several times a week to water the dirt, which creates mud. Since the mud holes are regularly watered, they don’t have time to dry out and turn to dirt again. Some dogs wallow in and even eat the mud, including mine. Several of the regular dogs have had diarrhea from eating this mud, including mine. Someone suggested we should fill them in. Someone offered to bring a wheelbarrow. Another offered to bring shovels. They did and last night, we filled in the holes. It took five trips to a dirt pile with the wheelbarrow to fill in the biggest one. We picked and shoveled and raked and when the sun was gone, the holes were filled. We did this for the benefit of everyone although most people didn’t offer to help. Most people just stood and watched us work without even offering to help. Most people looked the other way and said nothing when a 62-year-old man pushing a wheelbarrow said to the people standing around watching, “you all are welcome to help us.” Most people are selfish assholes.

So, my life revolves around my dog. I spent the better part of my Saturday evening filling in mud holes in a public park. I spend more time with random neighborhood dog owners than I do with my friends these days. My dog even attended her first birthday party: 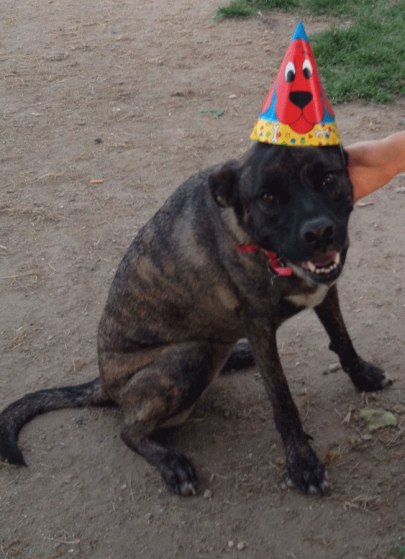 I can kind of understand how all my friends with children feel now. This must be what it’s kind of like to have a child and have your life suddenly revolve around them.