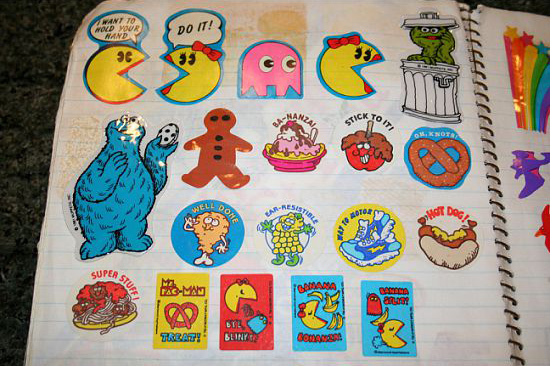 I’m moving. Ugh. I hate moving more than anything, but I don’t really have a choice in the matter. My current roommate is moving in with his girlfriend in a few months and he’s going to rent out the house I live in. Male is leaving at the end of this week, so his place is opening up. I’m not going to find anything better or cheaper than his place, especially not with the dog. Dogs ruin everything. Or at least they ruin being able to find an apartment.

Anyway, this past weekend, while Male is still there, I started moving stuff in. Hi, sad you’re going, could you get your crap out of the way so I can move my crap in? Also, I need to paint so just hang out over here under this drop cloth. K thx bai.

I have boxes that haven’t been unpacked in years. These boxes contain all the sentimental crap that you can’t bear to part with, but you don’t need on a regular basis, or at all, really. They go with me from place to place as is.

Once a decade or so, I open them up to see what’s in them. I was fairly sure that I knew what was in all the boxes, e.g. yearbooks, my baby blanket, sundry childhood keepsakes, my spikes from my punk days, various family heirlooms like my great aunt’s handmade figurines that she got somewhere in the world on her many travels.

In my typically backwards fashion, I moved all the boxes first and then went through them. Derp. I found all sorts or treasures that I had completely forgotten about.

I found my sticker book! The concept of a sticker book will only make sense to some of you. Basically, when I was a kid, I collected stickers and put them in a book, like so:

I can’t explain why stickers were so rad to my little girl self, nor why I would need to collect them and put them in a book, but there you have it. I was hugely into stickers. And I have to say, upon finding it, I got a little rush of joy looking at them again.

I also found about a bajillion pictures. Some were of our family trip to Niagara Falls. There’s a great picture of me and my dad standing in front of the falls that I’ll probably frame. Some of the pictures were from my 8th grade graduation from Catholic School. Who graduates from 8th grade? I did apparently. Some pictures were of summer camp and some were just random pictures. In almost all of the pictures of me, I’m making silly faces and silly poses. I was a pretty cute kid until the huge bug-eyed glasses came along.

My sister was going through the pictures looking for horribly embarrassing shots of her, which are mostly all of them, and found something disturbing. It was a picture of Monster #1, the person who sexually abused us as kids. In the background of the picture, my sister is standing with her arms crossed looking like she’s trying to burn a hole in the back of his skull. Sadly, she never succeeded. I don’t blame her. I probably tried to blow up his head many times using the power of thought, too.

Flip flip flip freeze. She didn’t know what to do with it, but she didn’t want to touch it anymore, so she flung it on the bed where Male and I were sitting. I picked it up before she could warn me and saw that face. Instinctively, I threw it away, too, like a game of hot potato. It landed in Male’s lap.

What is this crap? We explained. Oh, well, what am I supposed to do with this? I don’t want it either. He put it back on the bed. I picked it up by the corner as if it was contagious.

I couldn’t stop looking at it. It’s funny, that’s not how I remembered him looking at all. In my memory, he looked entirely different. He was supposed to be bigger, taller and scarier. Instead, he was shorter and thinner than I remembered, and not scary-looking at all. He had that prototypical child molester mustache, a curly mane of blonde hair and was wearing a suit for some reason. My sister in the background was dressed up, too, so there must have been an occasion of some sort.

As far as I know, it’s the only picture of him in existence. My sister wanted to destroy it. She was searching for a pair of scissors or something with which to cut it into little pieces or burn it. On the other hand, I didn’t have an urge to destroy it because it was somewhat liberating.

Instead of seeing a huge, scary monster, I saw just a man who was shorter and smaller than Male (the majority of people are–Male is 6’5″). Male would pulverize him, and in my no longer seven-year old body, even I could beat him up. He was just a man, not a monster. A man isn’t scary when you’re not seven years old.

I decided to keep the picture to remind me that, even though his actions were monstrous, he was just a man. He was not someone I should still be scared of. I could beat up the man in the picture who destroyed my life as he was, let alone now that he’s old and hopefully decrepit. Just knowing that, if it came to it, I could totally smash his face in with my fist made me feel better.

I didn’t want to accidentally come across the picture again, so I wrapped it in a piece of paper, wrote “Monster” on it and put it back in the box separated from the others.