Does that title make sense to people outside of North America?

You want to complain about my About page? Fine, Daily Post. It has been a long time since I’ve even looked at it really, so I guess it’s about due for a sprucer-upper.

Following DP’s advice, I took out a scalpel and cut out most of the words. Who needs words? It’s only an about page.

I feel like I just gave my about page a lobotomy. Poor thing will never be able to play chess again.

Instead, I added pickshers (pronounced pictures) because who doesn’t like pickshers? I created a GF trading card: 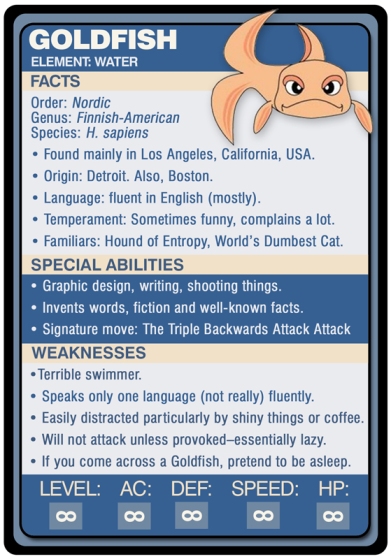 As an added bonus, I’ve proven to the whole world that I’m a giant dork. As if y’all didn’t know that already.

Watch out for the Triple Backwards Attack Attack. You cannot defeat the goldfish. My stats are mufuggin’ infinity!