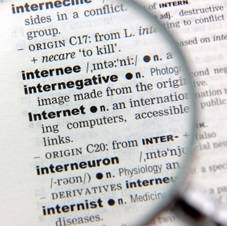 Today, the Daily Post told me to make up a word and its definition. I’m a huge fan of the English language. I have an autographed picture and I belong to the fan club. As I’ve previously discussed in the posts Slang-a-delic and The Wonderful World of English, I like rooting around in the cellar and discovering words that no one knows.

I love making up words, too. I do it all the time. They just pop into my head. However, normally, I don’t think up definitions for them so this post was a bit of a challenge… sort of–I still just wrote down whatever came into my noggin. I’m quite happy with some of these new words that sprung forth from my cranium and I will start using them right away. Now, out of my way, geritard. I have sleeping to do.

|ˈakˈrōˈsoōm|
verb ( -sumes, -sumed) [ trans. ]
1. Assuming that your audience knows an obscure acronym, particularly one common to your trade but not your audience’s, thereby causing them to either ask what it means or pretend that they know.
2. To assume that someone knows what an acronym means.
Harold continually acrosumed that Margaret knew what he was talking about, which annoyed her to the point that she didn’t even care to ask what EKLTMEDK meant.

ORIGIN
A combination of the words acronym and assume. 1940s: from Greek akron ‘end, tip’ + from Latin assumere, sumere ‘take.’

|afˈfärˈsnärt|
noun (pl. -snarts)
1. Literal: mouth snot.
2. A deep-sea invertebrate of the family schaediaea. It looks much like a jellyfish with even less structural detail. Related to the sea cucumber. Often served as a delicacy in Asia.
Sharon thought the affarsnart looked like a bowl of snot, but she tried it anyway since it was considered a delicacy in Asia.
3. Foul, disagreeable or nonsensical talk.
Wilbur could not believe the racist affarsnart coming out of Dave’s pie hole so he considered a way to bluntrify him.

|bləntˈrəˌfī|
verb ( -fies, -fied) [ trans. ]
1. To interrupt a person speaking, especially critical or derogatory remarks, by saying something so shocking or unexpected that the speaker loses their train of thought altogether.
2. To make a person speechless through an astonishing interjection.
Florence was sick of listening to her mother’s niggling so she yelled, “Mom, I’m in love with the dog and we’re getting married!” which bluntrified her right quick.

|färˈtriˈləˈkwism|
noun
1. When a person passes gas in a crowd and denies that it was them and/or blames it on someone else.
Bobby tried to fartriloquize by saying, “it must have been the dog,” once everyone smelled the fart.

|gasˈtrōˈpleksˈē|
noun ( pl. -plexies)
1. The condition of not knowing how to eat an entree in public, e.g at a restaurant or dinner party.
Scott experienced an acute bout of gastroplexy as he puzzled over whether he should use the salad fork or the spoon to eat the affarsnart placed before him.

ORIGIN
from Greek gastēr, gastr- ‘stomach.’+ from the obsolete adjective perplex ‘bewildered,’ from Latin perplexus ‘entangled,’ based on plexus ‘interwoven,’ from the verb plectere.

|ˌjerˈēˈtärd|
noun (pl. -tards, alt. ger•e•tard)
1. Slow-moving geriatric people in the way of faster moving traffic, oblivious to the fact that people are trying to get around them.
John was just about at his wits end with the geritard at the grocery store who was writing a check.
2. Something that is old, obsolete or in the way.
The old train station is a geritard on the neighborhood. Someone should tear it down and build condos.
3. A slow person who is in the way.
I hate shopping at Christmas since the stores are full of geritards.

verb (-tards, -tarded)
1. Causing a delay by being old, obsolete, slow or in the way.
Semi-trucks always geritard the freeway.

Adjective
3. Old, obsolete, slow or in the way.
My computer tower is so geritarded that I’m just going to trash it and get a laptop.

|myoōˈkōˈnāt|
verb (-nates, -nated)
1. The embarrassing act of ejecting a solid while sneezing.
Sally was mortified that when she sneezed, she muconated all over Bill’s new suit.

ORIGIN
A combination of the words mucus and detonate. From late Middle English via French from late Latin mucilago ‘musty juice,’ + -tonate: from Latin tonare ‘to thunder.’

|snärkˈtriˈləˈkwism|
noun
1. When a person says something off color in a crowd and tries to deny that they said it by blaming it on someone else.
Bobby snarktriloquially looked at the old lady next to him as if she was the one who yelled, “YOUR MOM SUCKS COCKS IN HELL!” during the symphony concert instead of him.

ORIGIN
Combination of the words snark and ventriloquism, from snark: 1876: nonsense word coined by Lewis Carroll in The Hunting of the Snark. + the Latin loqui ‘speak’

|spamˈdeks|
noun (pl. same)
1. Clothing that is far too tight for the wearer’s size or proportions, particularly made of the synthetic fabric Spandex, that inappropriately reveals too much of the wearer’s body.
Oh my god, did you see that girl who just walked by? Her spamdex was so tight that you could see every fat roll.

ORIGIN
Informal. A combination of the words for the canned meat product made mainly from ham called Spam and the brand name for a synthetic clothing material called Spandex.

|skwibˈbəl|
noun (pl. -bles)
1. A noisy objection to which no one is paying attention.
Angela began screaming her squibble over the rest of the PTA, but they were not listening to her over the din.

verb (-bles, -bled)
1. To yell an objection strenuously and loudly that no one notices.
The crazy man squibbled about aliens in the park as passersby took no notice.

|ˈkwizˈzəl|
Verb ( -les, -led)
1. Asking a flurry questions without waiting for or listening to the answers, thereby puzzling the person answering the questions. Mainly an attribute of children, but not exclusively.
Philip quizzled his kindergarten teacher so frequently that she had learned to just ignore him.