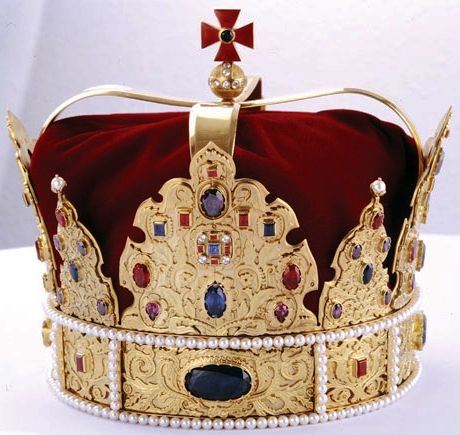 The Crown Of Russia

Sometimes, I refer to myself as the queen of metaphors, not because I’m royalty, but because my brain can usually come up with a simile or metaphor to explain a concept nearly instantaneously. They’re not always good, but they usually get the point across. Unsuspecting people have even complimented me on my creative use of metaphors. Occasionally, in response to a random, figurative description, I’ll hear something akin to, “That’s a really good way to describe [blank]”, to which I’ll reply, “I know. I am the queen of metaphors, after all.” and flip my hair over my shoulder (<- sarcastic metaphor).

I don’t mean royalty in a positive way, either.  I catch myself using yet another metaphor or simile to describe something that could just as well be described without grandstanding prolixity and I groan to myself.  My imperial rhetoric is imperative for the little proles, after all.  Without my fanciful expressions, the poor dears might not understand my monarchical decrees (<- sarcastic metaphor).

While writing something not too long ago, I used three different metaphors in the same paragraph to explain the same thing. If I’m not paying attention, I will similetaphor myself to death. I’m also fond of making up words.

A friend of mine says that speaking in metaphors and similes is a sign of quick-witted intelligence.  He says that to be able to recognize a pattern in something and come up with a figurative way to describe it is a sure sign of big smarts. I think that’s partially true. One can belie the other, but you can be quite intelligent indeed without breaking out with symbolic representations every other word, and speaking in metaphors regularly can make you sound like a bombastic dandy (<- simile).

I was talking to this friend of mine one day about my memory problems (see the post Goldfish).  And, for whatever reason, when trying to describe what it was like to have no short-term memory at all, my similetaphors completely failed me. I could not think of one single way to clearly describe to my friend what it’s like to not be able to remember things from one moment to the next. And that, ironically, is what it’s like to have memory problems.

Every single movie I’ve ever seen about memory problems is wrong. From Random Harvest to Memento, they all fail to get it right. I’m drawn to movies about memory since I have some experience with it myself. I keep hoping that, someday, someone will get it right.  So far, they have all failed.

The producers, writers and directors of these films fail because, typically, they throw memory into one big bucket (<- metaphor). They don’t seem to understand that memory is comprised of at least three sections that handle different assignments: short term, sensory and long-term memory. There’s no such thing as amnesia as it’s portrayed in film. You know what amnesia means in the real world? You’re a vegetable. Not only do you not remember who you are, sometimes, you don’t even remember how to breathe.

Say, for example, you see a television commercial for a plumber and you want to remember the phone number you just heard. Short-term memory stores the numbers so that, when you get to the phone, you can plug in the digits and maybe remember the name of the plumber you were calling (if you’re lucky), sensory memory tells you what your phone looks like when you find it, while long-term memory will tell you why it is that you even need a plumber in the first place. They all work in solidarity, seamlessly, so that you can call Bob’s Plumbing to get your toilet snaked.

For the first few weeks after I was hit on the head, I could have a conversation with someone, and not even five minutes later, I would not only fail to remember what we talked about, I might not even remember that we had talked. I built an elaborate, coping system out of notebooks and post-it notes (before smart phones), which was far more effective and less permanent that tattooing myself like the movie Memento. I’d be pissed if I had all sorts of chicken scratch, like “pay the electric bill”, tattooed on me today.

The biggest sin that those film people make is not acknowledging that, unlike toilets, the brain can repair itself.  New connections are made and new neural pathways are built to those old, dusty memories all the time. Some memories will, regrettably, be lost forever and never be recalled again, but a lot of them might be. Depending on the extent of the damage and provided that you’re not a vegetative amnesia patient, given enough time, the brain can become almost fully functional again. Mine did. The difference is truly amazing when you compare my brain today with my brain when I was first clobbered on the noggin.  Thankfully, it’s like I’m an entirely different person.

That is not to say that my brain functions 100% normally. Shiny things sidetrack it easily. My brain is like an excited puppy, waggling its tail indiscriminately on its axis without any discernible rhyme nor reason. (<- simile). For instance, the way this post started out talking about language end ended up ruminating on memory.

My brain doesn’t work as well as it did before it was smashed. There are still some days where I can’t remember anything and I have a hard time recalling even the simplest of words. I once asked someone, “What’s that aluminum container with the pop top that usually houses beer or soda called?” The bewildered reply came back, “You mean a can?” “Yeah, that’s it! Thanks.”

Even though my brain doesn’t work like it once did, it has adapted. It knows that a section of it is beyond repair, so it put up a “Caution” sign and built around it (<- metaphor). I’m certainly not implying that all brains are like mine. Each brain is unique, as is each head trauma. I was lucky enough to recover most of my mental function because I was still a teenager at the time.  My brain was busy erecting itself when it was destroyed. The work crews were already on site (<- metaphor).

The moral of the story is, if at all possible, it’s best not to experience blunt-force traumas to the head with heavy objects, but if you must, the great thing about memory problems is that you won’t remember what you were like before.