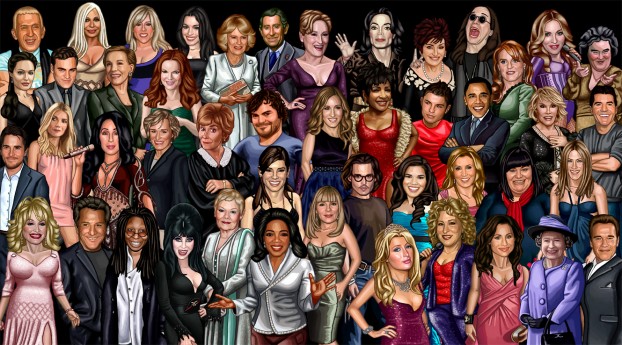 Who are these people?

I don’t have cable. I know! How do I survive?! It’s a mystery. Even when I did have cable, I rarely watched the network shows, E! Entertainment, MTV or whatever else it is that people watch. I really only ever watched science and history documentaries, classic movies and The Daily Show.

I don’t have a single magazine subscription, and I don’t read the newest or best selling books. I couldn’t even name you one popular author besides whoever it was that wrote those Harry Potter books and I can’t recall the name anyway. I’ve heard tell of some new popular vampire thing, which I will never read. I’m sort of a book snob. I admit it.

I don’t have satellite radio and I never listen to traditional radio other than NPR in the mornings. The closest I come to hearing the latest Top 40 hit is when my neighbors drive by my yard with their car stereos on full volume or when they are eventually played in stores as musak.

I seldom see movies in the theaters. If I pay to see something, my expectations are so high that rarely do films live up to them. Plus, there are people in theaters and, even worse, children – children whose parents let them run around kicking the seat in front of them. I’m certainly not implying that all or even most parents do this, but if there is even one parent who takes a child who is far too young to appreciate a movie to a theater, odds are, they will be sitting in very close proximity to me. That child will be playing with my hair and screaming in my ear while the parent sits deaf, dumb and blind to their antics. Plus, I find most contemporary Hollywood blockbuster movies to be rehashed, hackneyed drivel anyway. I’m also a movie snob. I admit it.

That leaves only the internet as a source of potential pop culture news. Even though there are a million sites with box office gross, Top 40 charts, best selling books and all sorts of juicy celebrity gossip, I never go to them. I don’t know who broke up with whom or who’s pregnant. Hell, I don’t even know who half of these “celebrities” even are. Ironically, I live in the entertainment capital of the world, but basically, it’s as if I live in a cave. Hello, my name is Goldfish and I am pop culture deficient.

That’s not to say that I don’t have an interest in those forms of entertainment. On the contrary, I am an avid reader, I watch a movie a day on average and, when I’m not doing either of those activities, I’m listening to music. It’s just that, in all of the pop culture pockets described above, I try to find the most obscure book, movie or music possible. I always have. It’s sort of a hobby of mine to sniff out excellent things that fly under the radar; things most people have never and will never have even heard of because they’re just not popular enough. If something isn’t popular, from my warped, backwards-world perspective, it just might be good. Finding that little hidden gem of culture that nobody else knows about is what I live for. Yes, I wade through a lot of crap, too. But every now and again, I find something that is just supremely awesome that makes all that other nonsense worthwhile.

I suppose I am the opposite of most Americans. I don’t have water cooler conversations about who won American Idol, mostly because I just don’t care. I don’t need to know why people have been lost for 5 years or however long it’s been (how the hell can you be lost for that long anyway?). I don’t care about people “surviving” in a rain forest with a camera crew. I couldn’t care less about fat people losing weight on national television (good for them). I really don’t care about make-believe friends or super heroes. I would prefer not to have yet another franchise from my childhood positively ruined for me. I would rather watch Infernal Affairs with subtitles than sit through The Departed. I have this thing called an imagination which is waaaay better than all of that.

So, if you’d like to have a conversation about foreign or classic books and movies, or about bands that are so original that they don’t fit neatly into any particular genre, I’m your person. Just don’t ask me about the latest, greatest celebrity/movie/book/song, because I have no friggin’ clue.