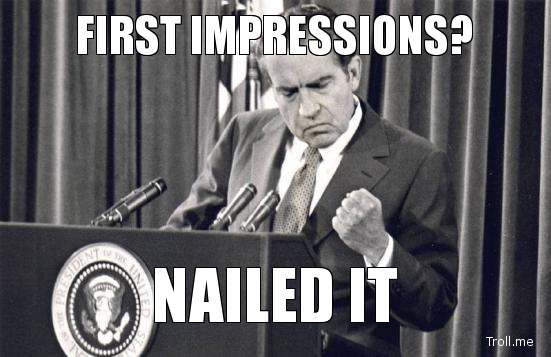 I’m Homo sapiens. As such, like all others of my species, I am judgmental as all get out. Humans are exceptionally fond of judging everything, including ourselves.

There is an evolutionary reason for it though! Way back when we had large jaws and bad posture, we needed to know in an instant whether an approaching figure was a threat or just Bobo from the neighboring tribe come to borrow some sugar. Real imminent danger and possibility of death as a consequence of a poorly done first impression is why we’re such judgmental assholes with fancy full-color vision.

Unfortunately, even though we don’t have to worry quite so much about giant death-inducing kittycats in the brush, we’ve held on to this instantaneous discrimination. Also, our pinky toes.

Maybe someday, evolution will rid us of this persnickety appraisal skill, but for now, we’re stuck with first impressions. So, I’ve decided to provide you with some of the criteria I use in summarily evaluating people. This is a list of biases that will badly reflect on my impression of you should I discover any of these things on first meeting.

Disclaimer: This post is chock full of stereotypes and I’m not a fan of those. I do not imply “all” to any of this. Also, this is not to say that these things color my opinion of people forever. We’re only talking about first impressions here.

They finally hired someone to help me with website stuff at work since the owner of the company yelled at them for making me do things that were not my job. Unfortunately, they gave me zero input on who to hire and just foisted someone on me.

The guy they hired seems to be vaguely competent, but his grammar is awful. He uses double negatives. He says “is” when he means “are.” He uses the word “ain’t” in a work environment. I have no choice but to think of him as a slack-jawed yokel.

Ugh. I’ve discussed my hatred for this vehicle a number of times on this blog. I am totally biased against people who drive them, and Los Angeles is swarming with the things. There are more Priuses here than bicycles.

The reason I hate Priuses is because they generally drive ten miles an hour slower than any other car on the road, they never use turn signals (I’m not even sure Priuses come equipped with them), and they will just straight-up stop in the middle of the road with no warning.

One of my neighbors is a lovely woman. Her eldest daughter graduated from high school this past summer and I gave her some money. The next day, there was a thank you card on my doorstep. That’s manners. For Christmas, she gave me a plant and some homemade dog cookies that my dog loved. She’s really an excellent neighbor, but she drives a Prius, and what’s more, she drives her Prius like a Prius driver. The other day, she backed out of her garage and nearly hit me because she didn’t look behind her when she pulled out. 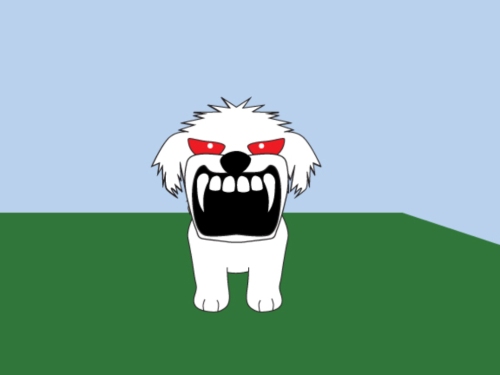 But, with more barking and lunging. Last weekend, I went to the pet store to buy dog food. I took my dog with me. There was a small fluffy white dog in the pet store that barked its fool head off at everything and everyone. Why on earth would you take a dog who hates everything to a pet store?

Which brings me to why I don’t like small fluffy white’s owner. They seem to feel that, because their dog is only ten pounds, their bad behavior is acceptable. No, it’s not.

This is typically a man thing since you don’t see too many women walking around in their ugly clothes.

Affliction is a clothing company based in Seal Beach, California. I sincerely hope that southern California didn’t export this awful trend to the rest of the world. About five or so years ago, they were super popular, but you still see people walking around in their overpriced garbage clothing obliterated with awful designs. Affliction shirts use every spare inch of material to vomit messy graphics like so:

Front and back covered with crap. It looks like you gave a marker to someone in the middle of a psychotic break. From a graphic designer’s standpoint, that shit is ugly and not worth $58. Seriously, $58 for a t-shirt.

I tend to refer to anyone wearing one of these as “douche” in my head.

I am automatically biased against anyone who advertises corporate products for free. For example, this:

You paid money to buy a product with a brand all over it and now you’re advertising their product for free. They should be paying you. Why are you walking or driving around as a billboard?

And, by the way, Abercrombie doesn’t have an athletic department; they’re a corporation.

California is in a serious drought and we have been for years. Yet people around here act like we’re not. They use water to clean their sidewalks instead of a broom. They water their non-indigenous grass several days a week and most of it ends up in the gutter.

The other day at the dog park, there was a woman with a dog who apparently wouldn’t drink from a bowl. No, her special little princess had to have running water, so she stood there for a few minutes running the hose for her precious snowflake to drink from. Meanwhile, a rather large and completely unnecessary mud puddle formed at her feet, which my dog proceeded to wallow in like the piggy that she is.

Ugh. Has anyone who says they like Ayn Rand even read any Ayn Rand? If it’s the only book you’ve ever seen in your life, you might not think it’s bad, but in comparison to practically every other novel ever written, it’s just bad writing.

I forget which book it is (and yes, I’ve read them all, including her first, We, The Living), but there’s a 90-plus-page soliloquy in one of them. The character is supposed to be talking to another character. Have you ever in your life sat and listened to someone for however long it takes to hear 90 pages worth of speech without at least interjecting an “uh huh” now and again? No, because no one has, except for the poor unfortunate characters in Rand’s books.

I find it incredibly suspect that anyone who’s read more than five novels could consider her a great or groundbreaking author. It’s kind of like saying James Joyce’s Ulysses is your favorite book. Not bloody likely.

I’m not going to sit here and say I’m right, you’re wrong, eat meat. I completely understand not eating meat. In fact, in grade school, I became a vegetarian myself for a while after a slide show on trichinosis. It’s a personal choice not to eat meat and I fully support your right to eat whatever you want, provided that it’s legal.

That said, I have the right to eat whatever I want, too. I am not a big meat-eater, but I do enjoy a nice steak from time to time, and I eat fish and poultry. I don’t try to disguise it as something else. I am fully aware of what I’m eating and where it came from. I don’t need you telling me what to eat any more than you’d want me to tell you all about the benefits of meat (#1-It’s delicious…). I say, live and let live. Do your thing and I’ll do mine.

With the exception of head cold sufferers and three-year olds, I tend to view anyone who can’t manage the tricky act of breathing through their nose while masticating with their mouth as a slack-jawed yokel. And with that, I was able to use the phrase “slack-jawed yokel” twice in the same post. WIN.

I have an hypothesis that most of the oblivious are actually Prius drivers out of their cars. These are the people who live in their own little worlds. They are the people who don’t move forward in line leaving a huge gap. They are the ones who don’t notice the cross walk says go, so they wait until the last minute and hold everything up. They are the ones who will slowly walk right down the middle of a store aisle, oblivious to the fact that you’re trying to get around them. They leave their shopping carts right in the middle, too. They don’t pay attention to anything surrounding them.

Ewwww, the unwashed. Specifically, I mean the unwashed after using a bathroom. I hate to think how many times I’ve been in a public restroom to see women walking out of the stalls without washing their hands. Gross.

I know that most hand washing is pretty useless since we grab the filthy door on the way out, and really, you need to clean your hands for a full minute like a surgeon to have it be even remotely useful at getting rid of germs. Still, it’s just polite to wash your hands after using the bathroom.

This applies to pretty much anything from global warming deniers to anti-vaccination parents to whatever fad diet is popular these days. I call these folks the “But I read it on the internet” types.

We’ve all see the guy outside the store or restaurant talking on a cellphone by holding it in front of his face instead of to his ear. Why?

I have a coworker who refuses to pick up the handset EVER. Every call he makes or receives is on a speakerphone. My favorite is when he calls the guy on the other side of me so that I’m in the middle. Not only can I hear them speaking in real life, but I can hear the conversation echoing through a speakerphone. He could probably just yell at him at it would be less obtrusive.

What kind of instant biases do you have?