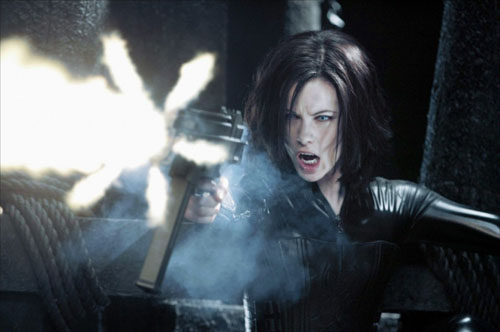 I’m a graphic designer, which means part of my job is to pay attention to detail. Being detail oriented is good in my job, but outside of work, it kind of sucks because it makes me notice things other people might not necessarily notice. This is a list of things that I notice about Hollywood television shows and movies that drive me crazy. I can’t help but notice them, and when I do, it takes me out of the story.

Movie characters in a city get to park wherever they like and there’s always a spot right by the door. If someone’s in the back seat, they sit in the middle where the hump is, because that’s the most comfortable spot, right? Movie characters never use turn signals or look over their shoulders before changing lanes. They’re never stuck in traffic unless it’s integral to the plot. Stop signs don’t exist.

Car chases abruptly end by a semi-truck randomly backing out. Cops who drive cars in movies always seem to be drunk since they crash into at least one parked car along the way or smash into each other. Cop cars also tend to roll more than other cars. Once you escape the police, by the backing semi-truck, you’re free because police helicopters or cops on the other side of the semi-truck don’t exist.

Cars explode a lot. Have you ever seen a car explode? No? That’s because they don’t. Unless you rig them with explosives, cars don’t explode. They catch on fire, but they don’t explode, because that would be an incredibly dumb and dangerous thing for cars to do. In real life, we wouldn’t tolerate cars that exploded when hit by tiny things like bullets. We’d sue the hell out of car manufacturers.

Movie drivers jerk the steering wheel back and forth like a five-year old playing grownup, especially in through the windshield shots, like this:

Seriously, next time you’re in a car, pay attention to how much the steering wheel actually moves. Unless you are making a turn, even on a curvy road or freeway, the steering wheel only moves a few inches and it’s always gradual. It’s not this herky-jerky motion they put in movies. This dog drives better than most movie characters:

Cop dramas are notorious for this. If I called the police in a non-emergency to relay information and they hung up on me without so much as a thanks, I’d be pissed or probably call back to make sure we weren’t disconnected in error.

A lot of drugs require something called fire. If you’re smoking a joint, using a bong, freebasing cocaine, or smoking or injecting heroin, you need fire. Here’s something Hollywood doesn’t seem to understand about fire: it’s hot.

If you cook up some heroin in a spoon and immediately inject the concoction into your veins, it won’t be a pleasant experience. Injecting boiling liquid into your veins isn’t a good idea. You’ve got to wait for that to cool first.

Overdosing is really the least of your worries here, Uma Thurman. Perhaps you should have a doctor look at your charred veins:

Drugs, all of them, in Hollywood movies, seem to have the same immediate effect. In real life, the effect isn’t absolutely instantaneous. Smoking drugs is about the closest to instant reaction and that still takes a couple of seconds to circulate through your bloodstream. Even snorting isn’t instantaneous since it has to dissolve first. And if you take a pill instead of snorting or injecting or smoking, the effects can sometimes take up to an hour to work. In the movies though, take a pill and WOOSH, fall back on the bed.

Ugh. Guns. I don’t necessarily care about accuracy if the character using a gun is an amateur, but a lot of times, so-called professionals have no idea what they’re doing. They fire two guns at once. They keep their finger on the trigger at all times. They don’t have the butt of the rifle nestled against their shoulder. They have no idea what they’re doing and they’re supposedly trained professionals.

Not only would Kate Beckinsale not be able to hit the side of a barn holding a fully automatic firearm like this, but the kickback would knock her arm off.

And don’t even get me started on how Milla Jovovich is holding this shotgun. If she fired it like that, it would probably knock her over. Firing a shotgun one-handed, even for a big brawny man, is just dumb. It guarantees you’ll not hit what you’re aiming for and it will most likely injure you in the process, which is kind of the exact opposite purpose of firing a weapon.

The reason we hold rifles and shotguns snuggly against our shoulders is not because we love them and need a hug, but because it keeps them from jumping all over the place and helps us actually hit what we’re shooting. This is what happens when you fire a shotgun one-handed:

I’m willing to allow a little wiggle room in science fiction and non-human characters, however, that doesn’t mean you should fire a gun like a damn moron. Use both hands. You’re more likely to hit the target, superhuman or not.

Only the pad of your finger should be on the trigger, and only when you’re ready to fire. Every time I see an actor with their finger all the way through like this example on the left, it makes me cringe: 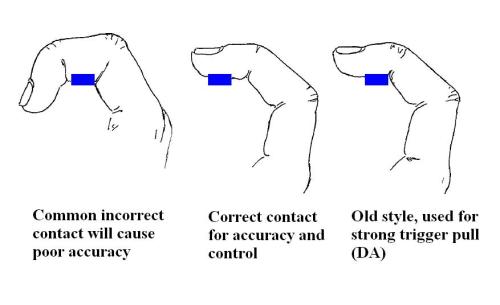 Will Smith, for example, has no idea how to use a gun. He’s using two guns in the picture below, but not accurately aiming either of them. Firing two guns at the same time is just stupid. You can’t aim either of them because you’re looking at both, the stability and accuracy you get by using both hands is gone, and how the hell are you supposed to reload when both of your hands are full of gun? Semi-automatic handguns will fire rounds as fast as you can pull the trigger, which is as just fast as you could pull two triggers, so you gain absolutely nothing by using two and you lose all accuracy.

Anyway, back to Will. He’s also firing while falling, which is a guaranteed way to not hit a damn thing you’re aiming at. His finger is all the way through the trigger guard. If he holds a rifle, it’s never securely against his shoulder. Yet, he’s supposed to be a trained police officer. Someone teach Will Smith gun basics, for the love of dog. This would never happen:

Not to mention the fact that when you fire a gun more than a few times, it gets really hot. Hot to the point where if you touch the barrel, you will burn yourself.

I’m not saying that science in movies has to be completely accurate. It’s better to have some almost but not quite accurate science in there than to have none at all. But, it seems that Hollywood has absolutely no clue how the universe works. Let’s take the Will Smith movie, Independence Day, as an example. If you’re worried about spoilers for a movie from 1996, skip the next paragraph and video.

In that movie, Will flies up to the mother ship in an alien spacecraft he can somehow fly, kicks some alien butt, blows up the mother ship, and delivers quipy one-liners. The end. Independence Day tries to sell us that they magically hacked the mother ship’s computers with a 1996 laptop, were engulfed in a massive space explosion, and caused every single mother and baby ship to be suddenly broken except the one he magically flies back down to earth. That’s so dumb it doesn’t even qualify as bad science. That’s just lazy storytelling.

Screenwriters trying to jam nonsensical crap like that down my throat is why I don’t watch a lot of Hollywood movies anymore.

Women in film are tropes. In action movies, they’re either helpless, whiny bimbos in need of saving:

Or they’re total badass Sarah Connor kickassiness (who still can’t hold a firearm properly after all that training):

Either way, they’re over the top. There is no gray area. Why can’t women just be, you know, regular people in movies? Why do they always have to be stereotypes of kickass or overemotional, shoe shopping, crying, wanting to get married airheads?

What are your movie pet peeves?