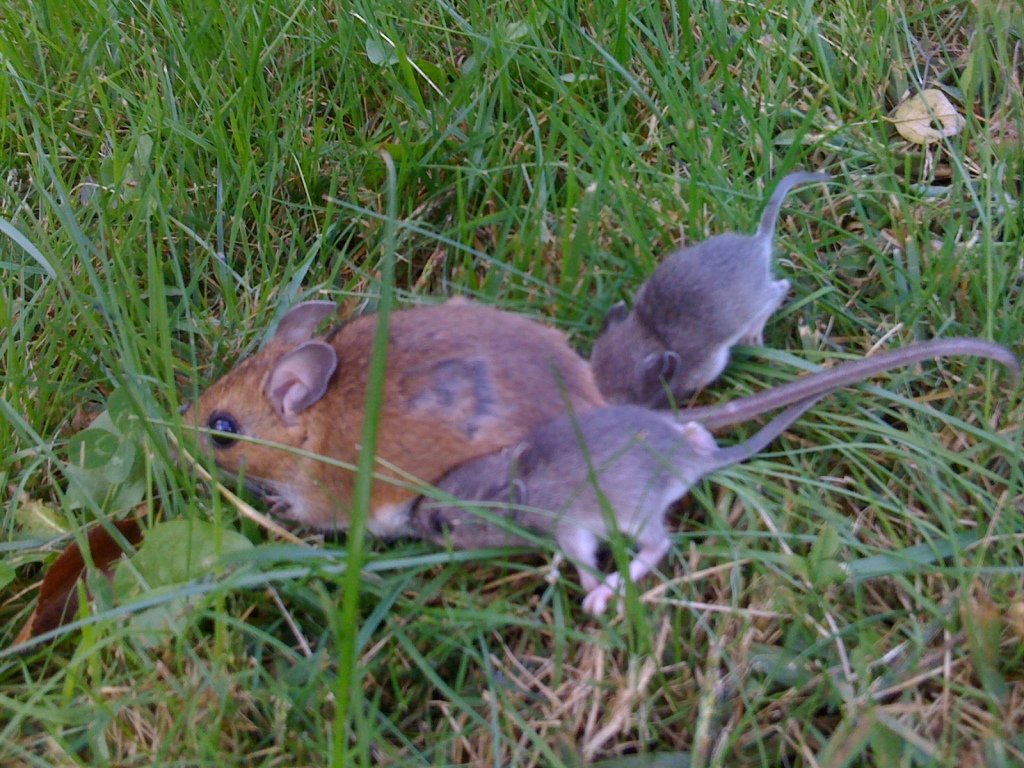 The little brown daughter asked, “Are we going now, mama?”

“Yes. Stay close behind me like I taught you, okay? We’ll be moving fast. It’s nearly daylight; the birds will be able to see us soon. If we run into a cat, fox, snake or giant animal, you run away as fast as you can. Don’t worry about the rest of us, you just run and keep running. We’ll meet back here once we’re clear, okay?”

“Remember, stay right behind me. If you can’t keep up, speak out. If anything happens, if we get separated, find your way home.”

“It’s okay. The first time is scary, but it will become second nature to you soon. Most likely, nothing will happen, but you need to be prepared. You need to learn how to survive. We have many enemies, but most of the time, nothing will happen. Stay right behind me and you’ll be okay. Just follow me.”

“Yes, mama,” they said in unison. Mama emerged from the burrow first, followed by the son, then the daughter.

“It’s cold out today. We should go find some sun somewhere,” said the little brown son.

“The sun hasn’t come all the way up yet, son, and we need to find food. We don’t have time for sun bathing.”

“I feel it, too. Don’t worry. It’s just the giant animals in the field. It happens every year, but they won’t come over this far for a while yet. You don’t need to worry about the giant animals. They are huge, but they move slowly; we can outrun them. You see that fence over there? We’re going just to the other side of it. Are you ready to run? Stay right behind me.”

“Let’s go.” Mama took off towards fence. She didn’t want to let her little brown babies know, but she was probably more nervous about this trip than they were.

She couldn’t help but think of her first time out with her mother and siblings. Her mother’s seeming indifference at the time had shocked her. She swore that, when she had babies of her own, she wouldn’t treat them that way, but now her mother’s behavior made perfect sense. She realized that her mother had probably been as scared then as she was now. Mama had already lost three babies before they were fully weaned and she couldn’t bear to lose the last two. She pushed the fear out of her mind and scanned the horizon looking for predators.

Her heart pounded more than usual as she ran. She resisted the urge to look behind her to see that her little brown babies were still there. She knew they were. She could hear them right behind her. This would be a short trip. Normally, on her own, she would go much farther, but for their first time, they’d only go as far as the first fence.

The first rays of sun were starting to poke through the dead grass. Soon, everything would be visible. They had to make it across the open area before that happened. They had to hurry.

They reached the end of the dead grasses and stopped just before the open area. Mama had crossed it so many times before. She scanned the skies and saw a few birds lazily circling in the distance where the giant animal noise was coming from. All the animals tried to avoid the open area except the birds and the giant animals.

The noise from the giant animals was getting louder. The whole earth under their feet was moving with a pulsating sound. It was coming from the other side of the open area and they were moving towards it.

She didn’t see any giant animals in either direction and decided it was safe enough. “We’re going to run really fast, as fast as you can go, until we get to the other side of the open area, okay? No stopping.” Her little brown babies nodded. “Let’s go.” They were still so small.

They took off running and made it across. Mama sighed. “We made it through the hardest part. Now, we look for food. Find whatever you’d like to eat. Stay close though, okay? Don’t go out of my sight.”

She watched her little brown babies playing and having fun. The noise from the giant animals was getting louder, uncomfortably so. Mama began to worry. The giant animals shouldn’t be this close. They weren’t due here for another few days. “Okay, babies, we’re going to move now, back across the open area.”

The whole earth shook. The noise was so loud that it was impossible to hear anything else. The giant animals were angry. They had to get out of here now. Instinctively, she started running away from the noise. Against her better judgment, mama looked behind her.

It was the biggest giant animal she had ever seen; at least, she’d never seen one this close before. It had huge teeth and it was bigger than even the open area. It was coming straight at them and moving fast. Their only options were to outrun the giant animal or run across the open area, and both were equally dangerous with no planning. She had to make a split-second decision.