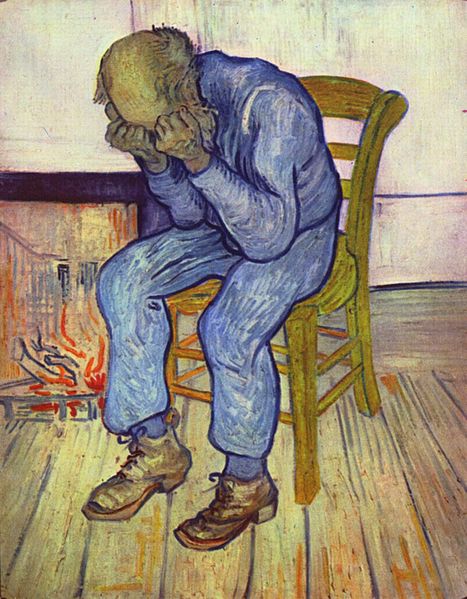 A grief without a pang, void, dark and drear, A drowsy, stifled, unimpassioned grief, Which finds no natural outlet or relief In word, or sigh, or tear. (Poem: Samuel Taylor Coleridge. Painting: Vincent Van Gogh.)

I’m not really crazy. Well, maybe I am, but I’m not diagnosed as crazy by mental health professionals. They don’t diagnose people as “crazy” anymore anyway. Those same mental health professionals have diagnosed me with clinical depression, or as the DSM calls it these days, major depressive disorder. I discussed the process of insinuating myself into the Los Angeles County Mental Health Department here. If you’ve never experienced a state-run loony department, I’d recommend reading it. It’s very enlightening.

I have major depressive disorder, which means that from time to time, I become so unbearably depressed that I can’t eat, sleep, concentrate, go outside, get out of bed or go five minutes without crying. I have to force myself to eat something every day, otherwise I wouldn’t eat at all. I debate with myself the best way to commit suicide even though I never would. I compose a last will and testament in my head, bequeathing my belongings hither and yon, which mainly consists of who will take care of my animals since I have little of value. I hear a voice in my head that tells me that everything, especially me, is hopeless.

Most of the time, it’s manageable. It’s a niggling little presence that I can shoo away like a fly, but it keeps coming back, and every time it does, it gets more insistent. The last time I had a major “episode” was about two years ago. I was unemployed. I was crying constantly over nothing. I wrote nearly every day because it helped. I wrote a post at the worst of it called A Little String & A Stuffed Donkey from whence I quote the following:

“I have this voice in my head that tells me that everything is meaningless.  It tells me that I shouldn’t bother with any of it, that it’s all pointless and I should just stop riding the ride. Get of the merry-go-round. I’ve taken to calling this voice Eeyore because it never has anything positive to say. Everything is hopeless in Eeyore’s world. Everything is terrible and futile and nothing is ever worth it.

Eeyore used to yell at me on high volume. When I stopped paying attention to it, it would only yell louder until it became a deafening roar in my head. The only time it ever stopped was when I gave in to it and really did start believing everything was hopeless. Eeyore and I would wallow in our sorrows and not get out of bed.

Telling someone, anyone, that you hear a voice in your head is just about the most difficult thing to do. It means admitting that you are not right in the head. It means, without a doubt, that you are crazy. There is a stigma attached. We’ve all been conditioned through media to think that voices in the head spells insane. Well, it doesn’t. Everyone has voices in their heads. Most of the voices are benign. They’re benevolent forces and team players. Most people don’t even realize they’re there. Like me, they thought that it was just their brain talking. The fact is, we all have them.

Most people are incapable of even realizing that what’s going in their head isn’t right. For the longest time, I thought the voice in my head was me. It was in my brain, therefore it was my voice. It took a long time to realize it was a distinct entity, because that’s exactly what it doesn’t want me to do. It doesn’t want me to shine a spotlight on it. It doesn’t want to be noticed. It wants to live in the shadows, controlling everything. That voice is not me. I would never commit suicide of my own free will. I don’t believe most of the things it tells me.

It was only when I recognized it as a distinct entity, and especially when I named it the emasculating name of Eeyore, that it began to lose some power. Instead of seeing an omnipotent black colossus of doom with glowering red eyes, bloody fangs and inescapable tentacles, I see a sad, little, stuffed donkey sitting alone in the corner with its head down. When you single it out and name it after a stuffed donkey, well, it shifts the power dynamic. Instead of seeing its words as valid parts of myself, I can see it for what it is–a saboteur.

I think I’ve always had depression since I can’t really remember when it started. Either I’ve always had it or it came on so gradually that I didn’t notice. I honestly cannot remember. I don’t really know how to describe it. I use silly metaphors like stuffed donkeys and holes, but really, I am incapable of describing it because I cannot see the whole of it. I am in the middle of it and I have no idea how big it is or what it looks like from the outside. Like Earth, it is the center of my observable universe.

Depression is so boring. Of all the mental disorders one could have, it is the most uninteresting. I could have schizophrenia, obsessive compulsive or personality disorders, or hell, even bipolar disorder. At least bipolar people have the manic side. As far as they go down, they go up. My therapist once told me that I’m not bipolar since she could only see the one pole and it’s not the fun one. I realize that mania isn’t much fun either, but sitting where I sit with only the one pole, well, a little bit of mania doesn’t sound all that bad.

For most of my life, I railed against the concept of medication. I thought that it was a cop-out, that it would somehow change me, that I wouldn’t ever be the same. Also, with my addictive tendencies, I knew that once I was medicated, I would never be un-medicated again. Then, things got so bad that I had no other choice. I could no longer cope on my own. I was disabled by my metal disorder. That is a horrifying thought. My friends (amazing that I still have any) gave me a choice: either seek help on my own or they would have me 5150‘d, placed on involuntary psychiatric hold. It was that bad.

I sought help, which when you’re in the midst of a major depressive episode, is just about the hardest thing in the world. Doing anything is hard, let alone seeking help. I am medicated. I’ve been medicated for over a year now. Things are better. I can barely hear Eeyore at all now. It’s still there–it will never go away–but I can ignore it. I can tell it to shut up and it will, mostly.

I’m still me. I don’t feel any different. The paranoid part of me says that, well, maybe the medication is designed to trick me into thinking I’m the same when I’m entirely different, but that’s negated by the people around me. The people closest to me say that I’m still me, only a less-crying version.

What have I lost? I’ve lost the ability to hear Eeyore constantly. I’ve lost the constant thoughts about how I would kill myself if it ever came to it. I’ve lost the sense that there is no hope and no future. I’ve lost the feeling that there is no point to any of it. Unfortunately, I’ve also lost my sex drive, some weight and what little capacity I had to sleep, but these things are a relatively easy trade-off to make. If only I had sought help sooner, I might not have lost years of my life feeling listless and impotent to this insidious disorder.

Next week, the National Alliance on Mental Illness is sponsoring Mental Illness Awareness Week. I’m starting a little early. I write this post in the hopes of reaching those like me who suffer from MDD or any mental illness, those who are terrified of being medicated, those who are too paralyzed by their disorders to get out of bed and get help, those who know exactly what I’m talking about, to you I say, please, just try. Do a search for mental health resources in your area. I guarantee there are some. Pick up the phone and call someone. Call a friend or a stranger, but tell someone your story. Just start there. Let them listen.

From the National Institute of Public Health:

Listed below are the types of people and places that will make a referral to, or provide, diagnostic and treatment services.

Please, get help. You are not alone. It will get better, I promise.

This post is part of the On Being Series.