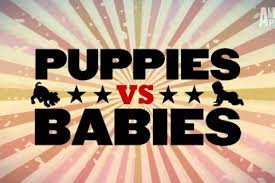 One of my coworkers has no soul. I am convinced she is a robot because she truly doesn’t understand the human connection with animals.

Another coworker had to put her eighteen year old dog to sleep. She took the day off for the procedure and the next day, too. The next two days were the weekend, and when she came back in on Monday, she was still a teary-eyed blubbery mess. Her heartache made me want to cry, too. I had to put my seventeen year old cat to sleep a few years before, so I totally understood.

When I went out to the parking lot at lunch, I found her leaning against her car sobbing. As she opened her car door, she noticed the seat cover on the back seat that was all of a sudden purposeless since she no longer had a dog. Just noticing it was enough to send her into another round of grieving.

During her absence, the soulless robot coworker asked where the grieving coworker was. When she was told the situation, she actually said aloud, “She took the day off for that?” We looked at her aghast, and instead of shutting her stupid mouth, some part of her robot programming decided to continue, “I’ll never understand why people grieve for animals. I mean, if it were a person, I could see taking time off, but a dog? They’re just animals.”

I wanted to punch her in the face. The only things that saved her from facepunch were that a) she didn’t say those words to the woman who just lost her dog and b) she truly did not understand. Obviously, she’s never had a pet. People who’ve never had pets couldn’t possibly understand.

That same sentiment has been said to me in regards to babies. “Once you have your own kids, you’ll understand,” as if it’s required that all humans procreate and that I couldn’t possibly understand that kind of love without popping a baby out of my privates. I find that sentiment presumptive and a little insulting to be perfectly honest.

I’m alright with that I suppose. I appreciate the fact that there is a big difference between human babies and animals. I don’t call my dog and cat “my children.” I don’t buy them clothes or strollers or have a college fund for them. They are not my flesh and blood. I would never equate babies and animals as the same. That said, I prefer animals over babies.

Someone needs to reproduce, but it won’t be me. Besides the fact that I just generally don’t like children, there are many reasons I won’t have babies. First, I’m nowhere near a level of financial stability that I would deem necessary to have kids. Children are expensive, even more expensive than animals. Second, I’m not in a committed relationship. Not that I feel it’s necessary to be married to have kids, but if I were to have children, I would want a partner. I don’t want to be a single mom. Third, I have some genetic concerns that I would be afraid to pass along to another generation, like Major Depressive Disorder, susceptibility to cancer and addiction issues. Last and most importantly, I do not have a snowy white past. I was abused as a child and abused children are far more likely to become abusers themselves. I would rather not have children at all than risk turning into an abuser.

So, when people say, “you won’t understand until you have kids of your own,” I find it presumptive and a little offensive. I don’t want children. My biological clock just never started ticking. I really don’t like babies. I don’t gush over them; I’m typically repelled by them. When people show me baby pictures, it takes all of my will not to grimace. Once they start walking, talking and not pooping their pants constantly, they’re not nearly as bad. You can kind of see that there’s a little human there.

That said, don’t demean my animals because I will key your car. If you’re going to tell someone without babies that they don’t understand because they don’t have their own spawn, please, use less concrete terms, e.g. you can’t (not won’t) understand unless (not until) you have kids of your own. I am aware that I can’t fully understand the relationship between mother and child, and until I win the lottery without ever buying a ticket, I probably never will.

I’m not using my pets as a substitute for babies. They just are my babies. My life seems to revolve around my pets and I’m alright with that.